Accessibility links
What Your $3,000 Bought In Haiti : Planet Money The principal of a rural school dreamed of a new schoolhouse. It didn't work out so well. 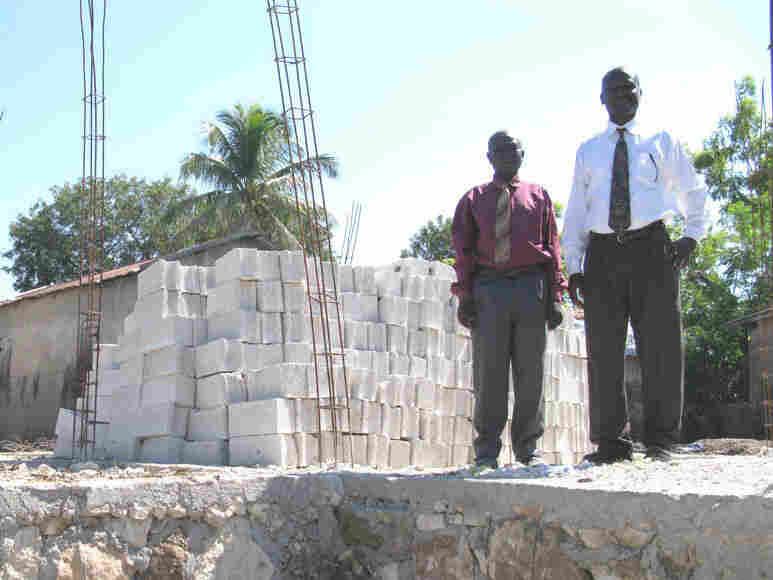 Earlier this year, we reported on l'Artibonite, a rice-growing region in Haiti. The people there were suffering because an influx of free rice from foreign aid groups destroyed the market for their crop.

Listeners responded, donating some $3,000 to support a school that figured prominently in the story. That's about 10 years of wages for the average Haitian.

The school doesn't have a building; classes are held in a small, one-room church, where blackboards are leaned up against the wall. The principal, Enselm Simpliste, thought he could use the $3,000 to build a schoolhouse.

We recently visited the school to see how things were coming along. The news is bad: All the money has been spent, and all there is to show for it is what's in the photo above — a foundation, some concrete blocks and some rock and sand.

Simpliste was in charge of the project. He says he bought the materials himself, and got bad information from a contractor, who told him the project would be done by October. As he told us through a translator:

I feel really, really ashamed. Every morning I wake up and I see the foundation and I see those concrete blocks. And people around are like making fun of me, because they were aware that a project started, a school was supposed to start and finalized by October.

The problems with the school project get at some of the broader issues we've been looking at all year in Haiti. Is it better for rich-world donors to work with NGOs, or to give money directly to poor people in developing countries?

Our story about Yvrose Jean Baptiste, whose small business was destroyed by the earthquake, also prompted listeners to donate thousands of dollars. And in her case, there was an entirely different outcome: the money transformed her life.