Accessibility links
Why Economists Hate Presents, And How 7th-Graders Solved The Problem : Planet Money Economists hate the inefficiency of gift giving. A group of seventh graders may have found a solution: Trade. 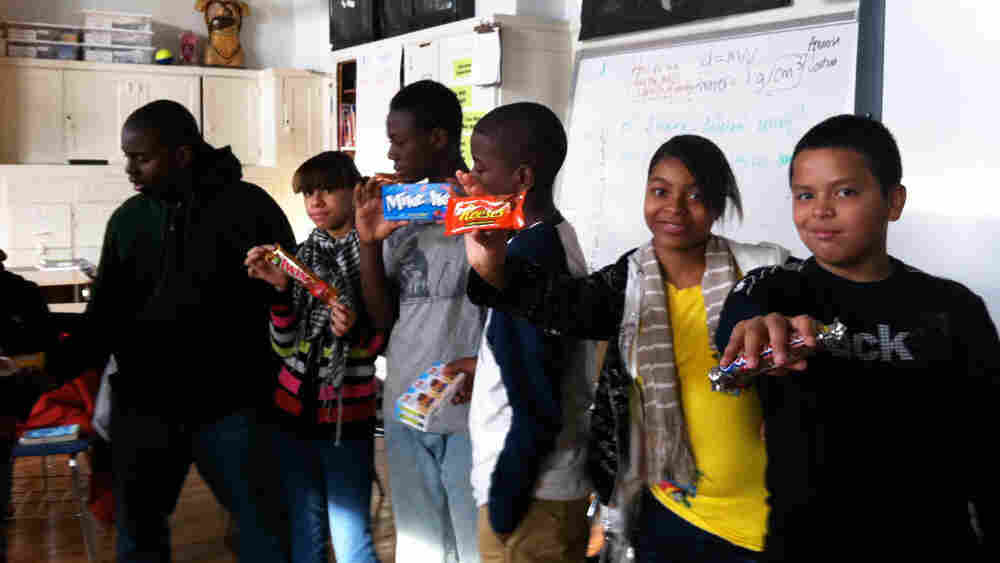 Students show off the results of their trades. Caitlin Kenney/NPR hide caption

To investigate a possible solution, we went to a seventh-grade classroom at a public school in Brooklyn.

The students were already familiar with the issue.

“This is kind of silly, but I got a Power Ranger,” Tadre Jones said. “I was grateful, but I didn’t really like it.”

So we had no trouble conscripting 10 kids to participate in an economic experiment that aimed to improve the efficiency of gift giving.

We started by giving out gifts in the worst way possible: randomly.

Some of the gifts (Reese's Peanut Butter Cups, Sour Patch Kids) were big hits. Others (fig newtons, raisins) didn't go over so well.

Then, to measure, how much "wealth" the kids had gained from the candy, we asked them: On a scale of zero to 10, how much do you value your gift? They were underwhelmed.

“I got Mike and Ike,” said Jeanacee Gonzalez. “It’s a zero, because I don’t eat these.”

In all, the students gave a total of 50 points to the gifts they’d received.

We asked the kids how to improve the situation, without bringing anything new into the room. In a few seconds, a student came up with one of the most important innovations in economic history: Trade.

So we gave them a chance to trade with each other. And suddenly, the classroom was like the floor of the Chicago Mercantile Exchange, with everybody swapping corn-futures contracts in a trading frenzy.

One kid called out his offer: “I got Nerds! I got Nerds!” Another held a Twix bar above his head, so the market could find him.

Then we closed trading in the market, and asked the kids to assign a value to the gift they wound up with.

“I got sour patches and, um, it's a 10 because I love sour patches,” said Jeanacee Gonzalez.

Like Gonzalez, who went from zero to 10, many students saw the value of their gifts rise dramatically. After the trading session, the total value of the gifts in the room was 82, up from 50 before trading began -- even though the gifts themselves had not changed.

Behold, the power of economics!

Still, it’s worth noting that humans, without celebrating economics, have quietly found their own way to more efficient gift giving. Parents intercept kids' letters to the North Pole, to see what they want. Lots of people give gift cards. And stores have very generous return policies.