Accessibility links
Shiny Promise Of Microfinance Shows Some Tarnish : Planet Money Politicians in some developing countries are encouraging borrowers not to repay. And a few studies have cast doubt on the benefits of lending small amounts of money to very poor people. 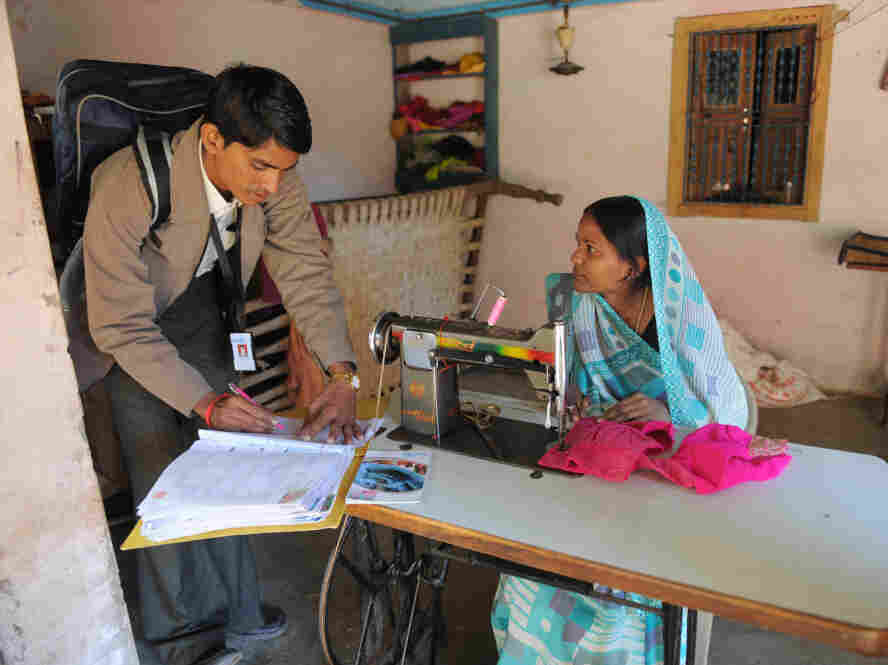 These are tough times for microfinance.

Politicians in some developing countries are encouraging borrowers not to repay their loans. And a few studies have cast doubt on the benefits of lending small amounts of money to very poor people -- a practice that has long been held up as one of the most promising ways to help people work their way out of profound poverty.

The scrutiny has been particularly intense in India recently (see coverage in the NYT, FT and WSJ), but there have also been tensions from Bangladesh to Nicaragua.

I spoke recently with David Roodman, who is writing a book on the history of microfinance, and who gave me his take on what's going on. A few key points from that conversation:

* The founders of a for-profit microlender in India made tens of millions of dollars when their company went public last year.

"It was in all the local newspapers how rich these people were getting," Roodman told me. "That had an important psychological and political impact. ... They're making all this money off poor people. You can imagine how that plays."

There was also a rash of suicides last year among microfinance borrowers. And leaders in the state of Andhra Pradesh saw microfinance threatening a form of community-based savings groups that they supported.

In response, Andhra Pradesh passed a new series of regulations that will have the effect of shutting down microlending in the state, which has been a major center of microfinance, Roodman said.

This is part of a broader debate about the place of for-profit companies in microfinance. On a Planet Money podcast last fall, Muhammad Yunus, the father of microfinance, argued that if you have investors who expect profits, you'll ultimately turn into something more like a loan-shark than a do-gooder.

Vikram Akula -- one of the people who made lots of money in a microfinance IPO last year -- argued that raising money from profit-seeking investors is the only way to spread microfinance quickly around the world, and will benefit the poor.

Roodman suggested that the debate may yield more for-profit companies that limit the profits they take, and cap the pay of senior officials. Some companies are already developing this model, he said.

* New studies found limited benefits for microfinance borrowers. One study of borrowers in India reported, among other things, that "No evidence was found to suggest that microcredit empowers women or improves health or educational outcomes" for their families.

The studies may have been too brief to show the benefits of the loans. Follow-ups will track borrowers for three years, which should be a better measure. "If they get similar results at three years, I think that’s very strong," Roodman said.

* "Credit is just dangerous. It’s like a drug ... and microcredit is not exempt," Roodman said.

All kinds of credit -- whether it's mortgage lending in the developed world or microcredit in the developing world -- tend to go through cycles.

Banks lend more and more money, to riskier and riskier borrowers. Eventually, lots of people fail to pay back their loans and there's a crisis.

Microfinance bubbles in Bosnia, Morocco and Nicaragua all popped around the time of the global financial crisis, Roodman told me.

* Muhammad Yunus, who won a Nobel Prize in 2006 for his work in microfinance, has run into political trouble in Bangladesh, where he created Grameen Bank. This story from the Economist explains the details.

* So what's going to happen to microfinance?

"Microcredit had this magical glow to it," Roodman said. "It's gone away, and that's healthy. But you wouldn’t say that just because of the mortgage crisis, we shouldn’t have mortgages."

Tightening of lending standards and a broad pullback may be coming, but microfinance will certainly persist.

At the same time, other forms of finance for the poor may become more popular among funders, Roodman says:

Almost all money that's going into microcredit is socially motivated.  ... It could be that a tipping point has been reached when the World Bank and others will say, "You know what? The feel-good aspect is gone. We'll put our money elsewhere."

* Using technology to encourage savings may be the new, new thing. Some of the money that has previously gone into microfinance may now go toward figuring out ways (cell phones; atms in poor villages) for very poor people to save money in the formal banking system.

The Gates Foundation's Financial Services for the Poor program, for example is all about savings. "They don't want to go near credit," Roodman says.