Accessibility links
Ranking Cute Animals: A Stock Market Experiment : Planet Money On the surface, Planet Money’s first economics experiment was all about cute animals. But we were really trying to get a better sense of how the stock market works.

On the surface, Planet Money's first-ever economics experiment was all about cute animals. (You can see the experiment here.) But we were really trying to get a better sense of how the stock market works.

We got the idea from John Maynard Keynes. Back in 1936, he described the stock market as a particular kind of beauty contest. You see a bunch of women's faces, but you're not supposed to say who you think is prettiest. You're supposed to guess who everyone else will think is the prettiest.

Of course, when everyone does this, it leads to a slippery investment world. "We have reached the third degree where we devote our intelligences to anticipating what average opinion expects the average opinion to be," Keynes wrote.

Pietra Rivoli, a professor at Georgetown's business school, explains the problem with a market like this: "The key danger is that nobody's really thinking."

With her guidance, we tested Keynes's idea. Instead of photos of people, we used videos of cute animals. About 12,000 people participated. When they came to our experiment page, they saw three videos that showed a kitten, a slow loris and a baby polar bear. 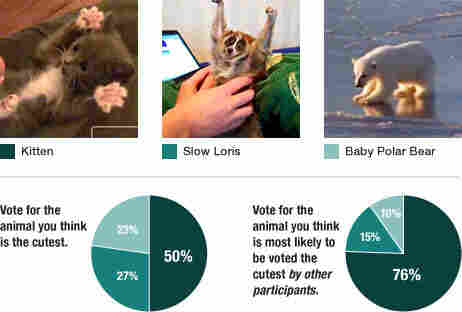 Note: Due to rounding, totals may not add up to 100 percent Alyson Hurt/NPR hide caption

Marla Wood, a Planet Money listener from Colorado, was assigned to the second group. She thought the loris was cutest. But she picked the cat, because she thought that's what everybody else would pick.

If the stock market were filled with Marlas, you could have a huge kitten bubble, even if no one thought kittens were cute.

As it happens, Marla guessed right, as did 75 percent of the people in her group. But 25 percent of people got it wrong. They thought the loris or baby polar bear would win. If this were a cute animal stock market, that could throw off prices.

Rivoli says when she hears on the news about the stock market doing this or that, she sometimes thinks: beauty contest.

"There's been some academic research on this that says there's a lot of price movement in individual stocks and in the market as a whole that we can't explain with fundamental, rational stories," she says.

This doesn't mean the stock market is totally nuts. Over long stretches of time, Rivoli says, even Keynes would probably argue the stock market gets things right. All bubbles eventually pop.

UPDATE: Several of you have asked in the comments why the chart on the left adds up to 101%.

The full results for Group B were:

Rounding up to the nearest whole percentage point, yes, you'd get a total of 101%, but including decimals, it's 100%.