Accessibility links
China’s Overseas Lending Surpasses World Bank’s : Planet Money China has surpassed the World Bank to become the preeminent lender to developing countries. Chinese banks made loans of at least 110 billion dollars to foreign governments and companies in 2009 and 2010. 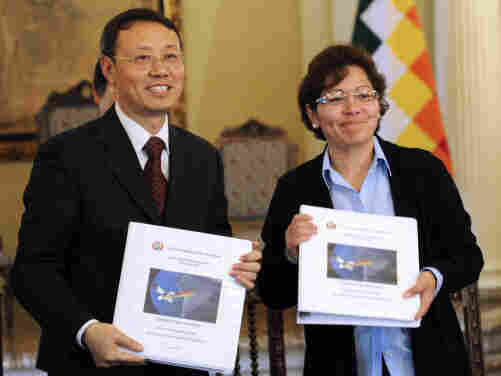 China has loaned developing countries more money than the World Bank in the past two years, the Financial Times reports.

Despite record lending by the World Bank since the financial crisis, China's two state financial institutions have surpassed it by billions of dollars. According to research done by the Financial Times, the China Development Bank and China Export-Import Bank made loans of at least 110 billion dollars to foreign governments and companies in 2009 and 2010. For comparison, the World Bank made loans of just over 100 billion dollars from mid-2008 to mid-2010.

The overseas loans are a major part of China’s effort to guarantee access to outside resources, particularly oil. The loan agreements include oil deals with Russia, Venezuela and Brazil, infrastructure projects in Ghana and railway construction in Argentina.

The two Chinese financial institutions do not disclose their financial data. The Financial Times reached the 110 billion dollar amount by examining public announcements by the banks, the borrowers or the Chinese government.