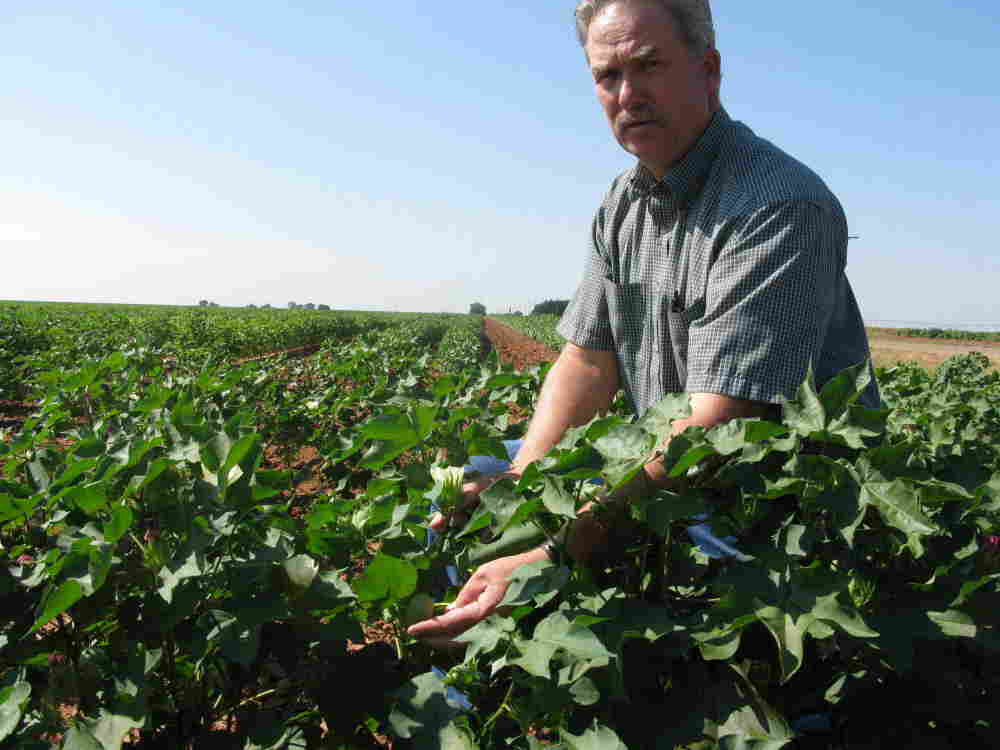 Planet Money is making the most thoroughly explained t-shirt in the history of the universe. Last week, we nailed down the design. Today's task: Buying four bales of cotton.

You can buy cotton from all over the place — Uzbekistan, Australia, Mali. But I started with the U.S., the world's largest cotton exporter.

I visited Dahlin Hancock, a fourth generation cotton farmer in New Home, Texas. We talked about the cotton business, and he showed me around.

Then he started hammering on two points:

Point number one is self-explanatory. As for point number two, here's what Dahlin had to say about Brazil:

In other words, the United States and Brazil are in the middle of a war over cotton. It's an emotional and quiet war complete with global retaliation and a $147 million bribe. It all started with a man named Pedro Camargo.

Pedro is a Brazilian cattle farmer and former trade official. He has huge glasses and a gray bushy mustache. He says the U.S. is cheating.

U.S. cotton farmers, Pedro says, get subsidies from the U.S. government that add up to somewhere between $1.5 billion and $4 billion a year.

"We want to compete farmer against farmer," Pedro says. "Not Brazilian farmer and the American farmer with the help of the United States government."

He says the U.S. isn't following the World Trade Organization's rules of global trade — rules that the U.S., Brazil and 151 other countries have agreed to follow.

Pedro became secretary of trade in the Brazilian Agriculture Department in 2000; two years later, Brazil filed a case against the U.S. at the WTO.

Brazil won the case in 2004, but nothing changed. The U.S. kept the subsidies in place almost exactly as they had been.

The U.S. appealed, and the case made the rounds at the WTO for seven years. The U.S. kept losing its appeals, but the subsidies stayed in place. And there wasn't anything the WTO could do about it.

"The WTO has no legal authority to make any sovereign country do anything," says James Baucus, a former WTO judge. "It has no police force; it has no black helicopters."

But Brazil did have one option: Retaliation.

WTO rules let the winning country — in this case Brazil — tax imports from the losing country.

So Brazilian officials decided to threaten some powerful American industries with taxes, in an effort to recruit them into their battle against American cotton.

They made a list of 102 products and got in touch with powerful American business groups. They said the new import tax would apply within 30 days — unless the U.S. government sent a team to Brazil to negotiate the cotton issue.

The list turned American wheat growers and shoe makers (among others) into Brazil's allies, and they pressured Washington to send a team to Brazil to try to work things out.

Here is where our story takes it last and final twist.

The American negotiators sat down in Brazil and immediately declared it impossible to get rid of the cotton subsidies right away. But the two sides came to an agreement.

The U.S. would pay Brazilian cotton farmers $147 million a year, and Brazil would drop the threat of retaliation.

"Maybe it's a bribe," Pedro Camargo says. "For Brazilian farmers, it's a lot of money."

In the meantime, we still need four bales of cotton for our t-shirts.

We have an excellent mill in North Carolina that will turn our cotton into fabric And for the most part, American mills, thanks to a whole other set of U.S. trade policies, typically only buy U.S. cotton.

So in the end, the choice has already largely been made for us: We're buying U.S. cotton.

Besides, we've already paid for a big chunk of it with our taxes.