Accessibility links
How To Stop Getting The Yellow Pages : Planet Money A Web site that launched today lets you opt out of getting the yellow pages. There's been an anti-phone-book push on in some quarters for a while now.

How To Stop Getting The Yellow Pages

How To Stop Getting The Yellow Pages 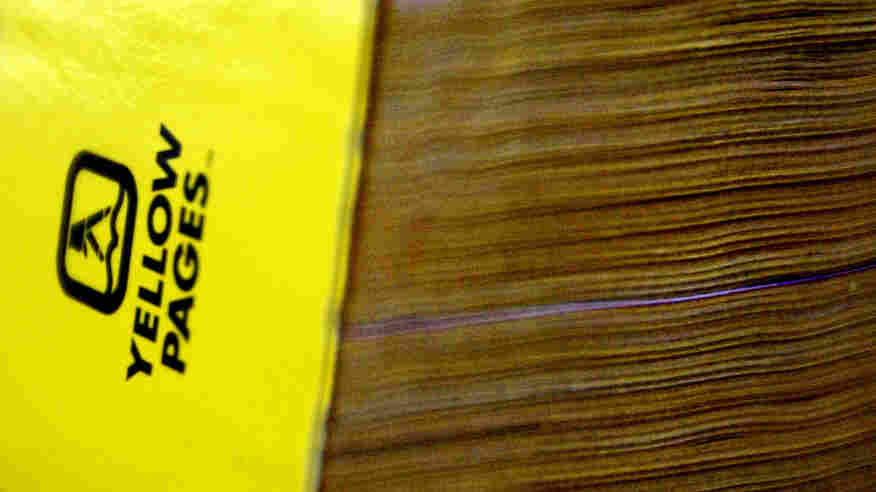 A Web site that launched today (yellowpagesoptout.com) lets you block delivery of the yellow pages.

The site is run by a couple of phone directory trade groups. I just tried it. It's running very slowly (maybe because it's getting lots of traffic). It also requires multiple steps, including submitting your email address and phone number. But it seemed to work, eventually. At least, I think it worked — I won't know for sure until I don't get the yellow pages.

The site may be a response to an anti-phone-book push that's been on in some quarters for a while now.

San Francisco is considering an ordinance that would allow companies to deliver yellow pages only to people who opt in — those who explicitly say they want to get the yellow pages. The industry opposes the measure, the San Francisco Chronicle reports.

And Seattle passed an ordinance last year that allows people to opt out of getting the yellow pages. One of the trade groups behind the industry's opt-out site is suing to block the Seattle ordinance, arguing that it violates companies' First Amendment rights. (Here's more from the Seattle Post-Intelligencer.)

Companies also made the First Amendment argument to fight the telemarketer do-not-call lists a few years back. The cases bounced around the courts for a while, but the list ultimately held up. As of last year, the national do-not-call registry had more than 200 million numbers, according to the FTC.