Accessibility links
The New Economics Of Fancy Playgrounds : Planet Money New York just opened the latest in a series of innovative new playgrounds. Why were playgrounds so boring for so long? And what suddenly changed? 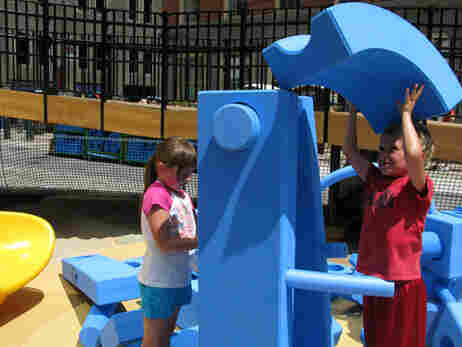 At the $7 million playground that opened today in New York City, there are hundreds of giant foam shapes for kids to play with, and not a swing set in sight.

The Imagination Playground is the latest in a string of fancy, innovative playgrounds that have opened recently in the city. For anybody who has ever gone down a slide, this raises a few questions:

Why were playgrounds so boring for so long? And what's suddenly changed?

The standard playground goes back about 100 years, and was created for New York City children who would otherwise have been playing in the street or the river, says Susan Solomon, an architectural historian.

"By then you are already dealing with the sandbox, the slide, the seesaw," she says. "Playgrounds are all about avoiding risk."

The city used this model to build lots of cheap, cookie-cutter playgrounds through much of the 20th century. There were some innovators in the 1960s — people who wanted to create playgrounds that, like the Imagination Playground, allowed kids more freedom to build stuff and play in a less structured way.

But the threat of lawsuits discouraged some of the would-be innovators — and even led to the removal of some old playground favorites, like merry-go-rounds.

Lawsuits, of course, haven't gone away. In the last few years, though, city leaders have come to see a new benefit associated with innovative playgrounds: Money.

The Innovation Playground was paid for in part, by economic development money to bring business back to lower Manhattan after Sept. 11. So real measure of success won't just be in the delight of the children. It will be if we hear squeals of laughter from business owners and condo developers, who suddenly have a unique, kid-packed amenity to help them sell.