Accessibility links
Why Do People Pay So Much For Gold? : Planet Money PLANET MONEY: Lots of people have been buying gold lately — the price has doubled in the past three years. People say gold has been valuable for thousands of years, so it seems like a safe bet that it will still be valuable tomorrow, and next year. 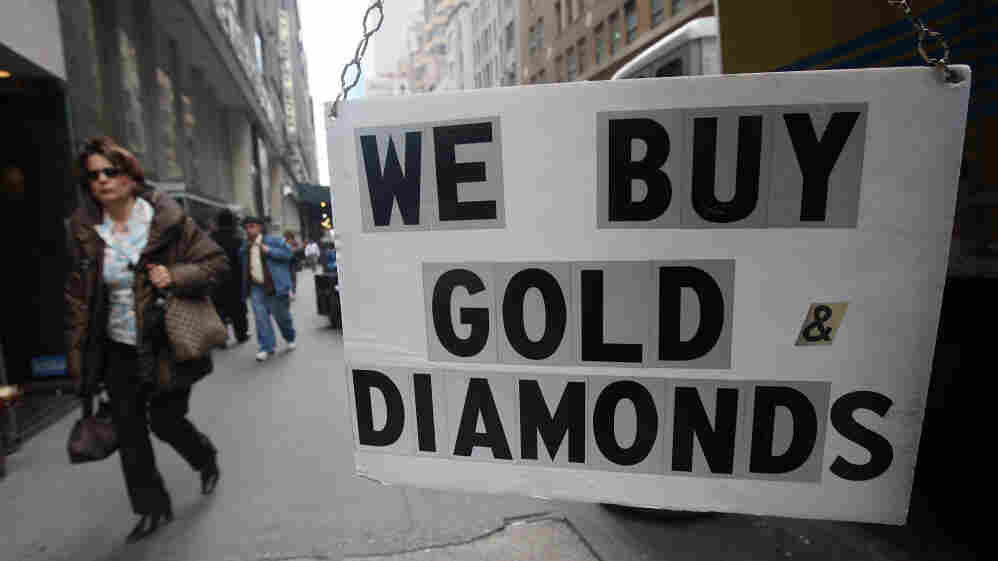 The price of gold has been going through the roof lately, and we wanted to know why. You can't eat gold, or use it to fuel your car. Why do people pay so much for it?

So we thought we'd try it for ourselves; we decided to buy gold with the money we had left over from our toxic asset.

In New York's Diamond District, a few blocks from our office, we found a place listed on the U.S. Mint's website. It's not really a store in the ordinary sense of the word. It's more like a food court — a room with stall after stall of guys selling jewelry and gold.

One stall has two guys, and a piece of paper taped to the wall. The paper says "Gold Standard," which is the name of the business.

The guy who runs it, Hank Mendelsohn, has been here since the '70's. He got his start going around to dentists' offices, buying teeth with gold fillings.

For Hank, the spike in gold prices has been good for business. One time, he says, a hedge fund wired him hundreds of thousands of dollars, then sent an armored car to pick up the gold.

Lots of people have been buying gold lately — the price has doubled in the past three years. And everyone will give you a reason why.

A big one is just history. People say gold has been valuable for thousands of years, so it seems like a safe bet that it will still be valuable tomorrow, and next year.

On the other hand, a lot of people say we're in the middle of a gold bubble. And it's a weird feeling handing it over a jar of cash for this tiny piece of metal.

A few days later, we talked to Dennis Gartman, who manages hundreds of millions of dollars of investments — including some $25 million in gold.

Lots of people buy gold because they're worried about inflation, Gartman says. They're worried the dollar — and the euro, and the yen — are going to lose value.

For those people, gold is like another currency — one that central banks can't print at will. Who cares if it's just a metal? If everyone buys gold because they believe it's valuable, then gold is valuable.

But Gartman isn't betting on inflation. He told us he's buying simply because the price has been rising, and he thinks it's going to keep going up, at least for a while.

Whatever happens to the price, we've decided that we're going to sell our gold in six months.

Before then, we'll be doing more stories about gold, money and the nature of bubbles. Maybe in six months, we'll know if we're in the middle of a gold bubble right now.