Accessibility links
Gold and the Periodic Table of the Elements : Planet Money The periodic table lists 118 different chemical elements. And yet, for thousands of years, humans have really, really liked one of them in particular: gold. A chemist explains. 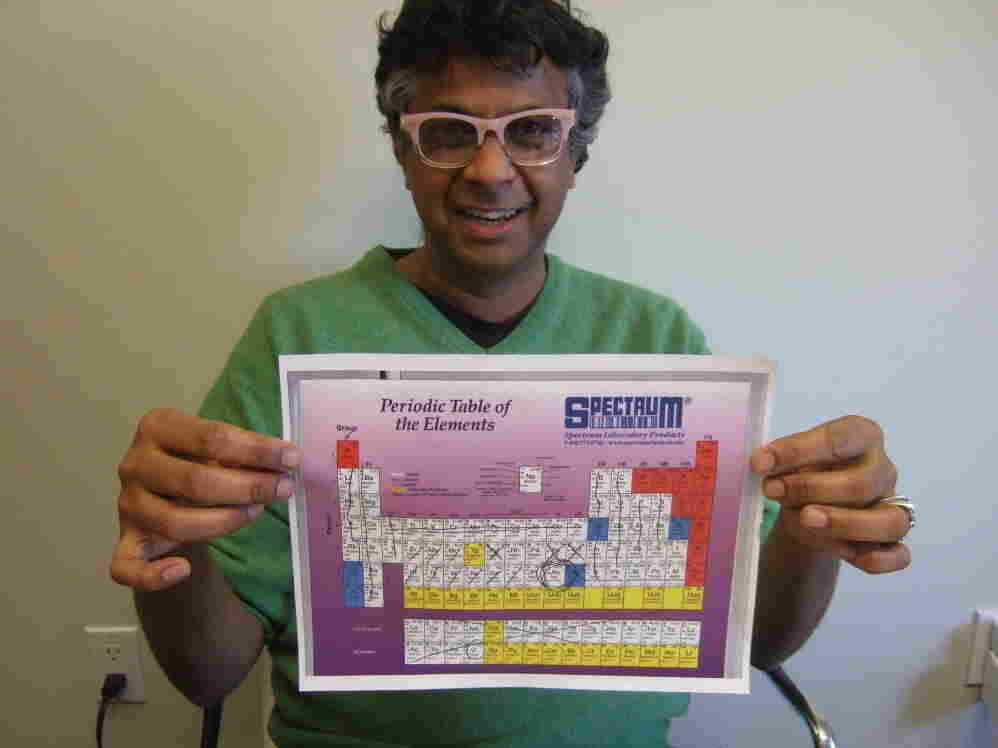 The periodic table lists 118 different chemical elements. And yet, for thousands of years, humans have really, really liked one of them in particular: gold. Gold has been used as money for millennia, and its price has been going through the roof.

Why gold? Why not osmium, lithium, or ruthenium?

We went to an expert to find out: Sanat Kumar, a chemical engineer at Columbia University. We asked him to take the periodic table, and start eliminating anything that wouldn't work as money.

The periodic table looks kind of like a bingo card. Each square has a different element in it — one for carbon, another for gold, and so on.

Sanat starts with the far-right column of the table. The elements there have a really appealing characteristic: They're not going to change. They're chemically stable.

But there's also a big drawback: They're gases. You could put all your gaseous money in a jar, but if you opened the jar, you'd be broke. So Sanat crosses out the right-hand column.

Then he swings over to the far left-hand column, and points to one of the elements there: Lithium

"If you expose lithium to air, it will cause a huge fire that can burn through concrete walls," he says.

Money that spontaneously bursts into flames is clearly a bad idea. In fact, you don't want your money undergoing any kind of spontaneous chemical reactions. And it turns out that a lot of the elements in the periodic table are pretty reactive.

Not all of them burst into flames. But sometimes they corrode, start to fall apart.

So Sanat crosses out another 38 elements, because they're too reactive.

Then we ask him about those two weird rows at the bottom of the table. They're always broken out separately from the main table, and they have some great names — promethium, einsteinium.

But it turns out they're radioactive — put some einsteinium in your pocket, and a year later, you'll be dead.

So we're down from 118 elements to 30, and we've come up with a list of three key requirements:

Now Sanat adds a new requirement: You want the thing you pick to be rare. This lets him cross off a lot of the boxes near the top of the table, because the elements clustered there tend to be more abundant.

At the same time, you don't want to pick an element that's too rare. So osmium — which apparently comes to earth via meteorites — gets the axe.

That leaves us with just five elements: rhodium, palladium, silver, platinum and gold. And all of them, as it happens, are considered precious metals.

But even here we can cross things out. Silver has been widely used as money, of course. But its reactive — it tarnishes. So Sanat says it's not the best choice.

Early civilizations couldn't have used rhodium or palladium, because they weren't discovered until the early 1800s.

That leaves platinum and gold, both of which can be found in rivers and streams.

But if you were in the ancient world and wanted to make platinum coins, you would have needed some sort of magic furnace from the future. The melting point for platinum is over 3,000 degrees Fahrenheit.

Gold happens to melt at a much lower temperature, which made it much easier for pre-industrial people to work with.

So we ask Sanat: If we could run the clock back and start history again, could things go a different way, or would gold emerge again as the element of choice?

"For the earth, with every parameter we have, gold is the sweet spot," he says. "It would come out no other way."

Today of course, we don't use gold as money; we use paper. It doesn't kill you, but it can be found in abundance and has an annoying tendency to burn when it comes into contact with a flame.

In a future story, we'll explain how we came to use paper money instead of gold.

This story is the second in a series. The first installment is here: "We Bought Gold!"