Accessibility links
A 'Wingnut Argument' For The Gold Standard : Planet Money "Sex, mathematics, music, gold — all these things are universal," James Grant says. Grant has called for a return to the gold standard, even though most economists find the idea "laughable." 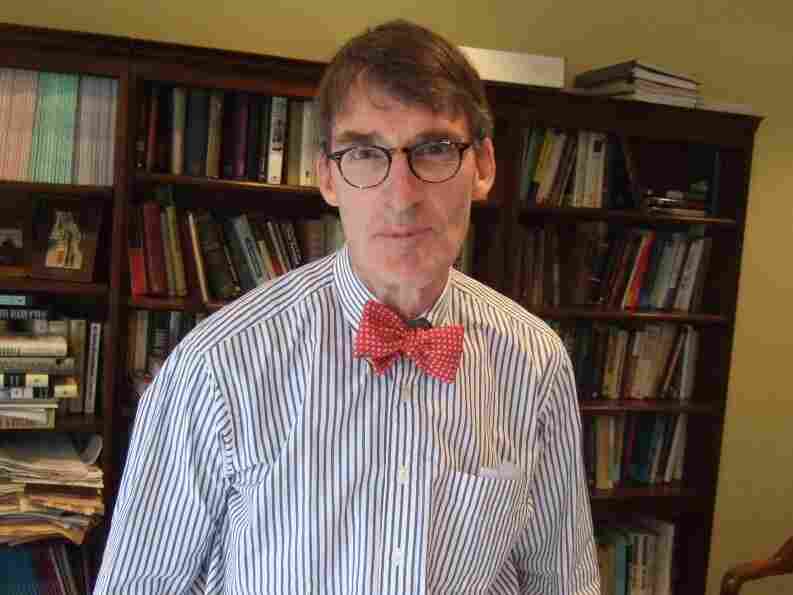 James Grant seems like he's from another era. He wears a bow tie, works in a wood-paneled office on an old part of Wall Street, and publishes a newsletter called Grant's Interest Rate Observer.

A few months back, he wrote a New York Times op-ed pining for the days when we were on the gold standard — when every dollar was backed by gold.

That caught our eye. As an adventure in investment journalism, the Planet Money team recently bought a small gold coin, and we've been using our investment to better understand the nature of money. So we went downtown to talk to Grant about the gold standard.

The idea that gold has a fundamental value "is deeply rooted in all of us," Grant told us. "There's a few universal things. Sex, mathematics, music, gold — all these things are universal."

If you're not on the gold standard, the government can print as much money as it wants. That can cause inflation: The more dollars that are out there, the less each dollar is worth.

On the gold standard, money isn't something you can just create out of nowhere. It's something physical. Constant.

It's only relatively recently that we adopted our current system — the system in which our central bank, the Federal Reserve, gets to decide how much money should be out there. Here's Grant comparing the gold standard to the current system:

So the gold standard, the value was fixed and we adjusted our affairs to this North Star of value. Today, the North Star is like a comet. Ben Bernanke testifies one day, he thinks he wants to impart a little zest into our shopping by injecting more green, paper dollars into the world. He thinks that more of them will be more better. Why? Because it will cause prices to go up just enough. Not too much, but just enough. Do you believe that? It's risible. Laughable.

Actually, most economists do believe that. They think having Ben Bernanke and his colleagues at the Fed control the supply of money is a preferable alternative the gold standard. And Grant knows this.

"The argument I'm making is in fact the wingnut argument," he said. "Every self-respecting tenured faculty member in economics this country, almost without exception, would laugh it out of court."

So we left James Grant and called up Randall Parker, a professor of economics at East Carolina University.

...is a pernicious anachronism that should be kept in the history books. And to think that modern people today want to speak about its resurrection should absolutely horrify and terrify anyone who understands economics even a little bit.

The reason the gold standard should horrify you, Parker says, is that in a financial crisis, like the one we just went through, it can make things worse. In fact, most economists agree that the gold standard was one of the causes of the Great Depression.

Parker says when you're in a situation like the Great Depression, what the Fed needs to do is put more money out into the economy to get things going again — to make it easier for businesses to borrow money and hire people. But if you're on the gold standard you can't do that. There's only so much gold in the world. That means there's only so much money.

For Parker, and for most economists, moving from the gold standard to a world where money doesn't have to be backed by anything physical — where central banks can adjust the amount of money as needed — was an important breakthrough. It was progress.