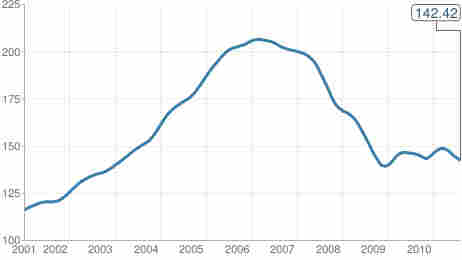 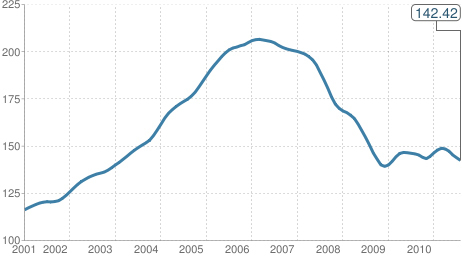 It's been almost five years since the housing bubble peaked, and the bust isn't over yet.

Home prices around the country fell 4 percent last year. They're now down about 31 percent from their peak, according to today's Case-Shiller numbers.

More declines are likely to come. Here are four reasons why.

1. There's still a glut of houses on the market.

2. Distressed sales account for a huge chunk of all home sales.

Distressed sales include foreclosures and short sales, where the owner sells for less than he owes on the mortgage. According to one measure, distressed sales accounted for nearly half of all home sales in January. These homes typically sell at a discount.

That in turn tends to bring down the prices of other homes, even those that aren't distressed sales. This problem is likely to persist: Nearly 5 percent of all mortgages are in foreclosure, which matches the all-time high. (For more on distressed sales, listen to our interview with Mark Zandi.)

The rate on the average, 30-year mortgage hit 5 percent this month, up from a low of 4.17 percent last fall. Higher interest rates make it more expensive to buy houses. As this morning's WSJ points out, that pushes some would-be buyers to keep renting, which in turn reduces the demand for homes.

4. The government will continue to wind down some of the extraordinary measures it took to support the housing market.

More than 90 percent of new mortgages are guaranteed by taxpayers. This props up home prices by making it easier for people buy houses. This is exceptionally high by historic standards, and will decline over time.

The Obama administration has already recommended lowering the cap on the size of mortgages that are guaranteed by taxpayers through Fannie Mae and Freddie Mac. The cap was raised to as much as $729,750 during the crisis, and is scheduled to fall to $625,500 later this year.

The latest downward leg in home prices started after the end of the another government program — first-time home-buyer tax credit, where the government paid people thousands of dollars to buy houses.

It will probably be a long time before prices get back to the heights of the bubble. A study last year looked at more than a dozen financial crises from the past century, and found that home prices tend to remain below their bubbly peaks during the entire decade after each crisis.

For more on home prices: See our recent post, "Should You Rent Or Buy?"