Accessibility links
What A Coin Toss Has To Do With The Housing Market : Planet Money A simple experiment helps explain why there's still a glut of houses for sale, five years after the housing bubble popped. 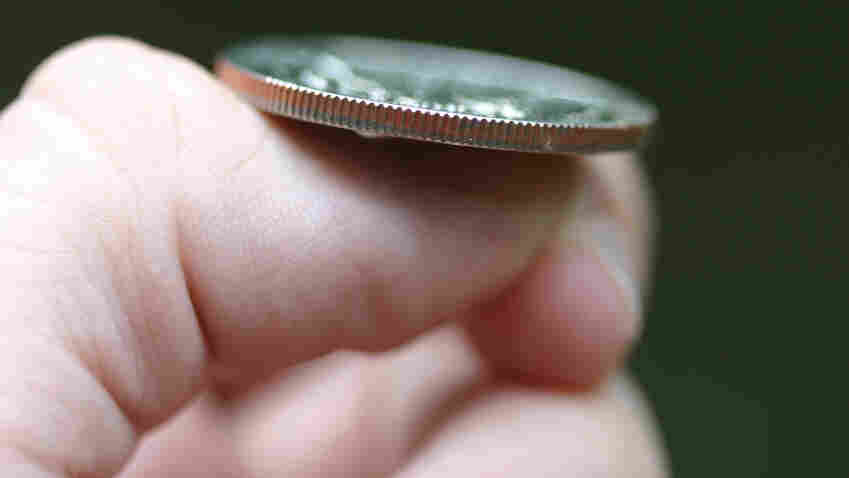 It's been almost five years since the housing bubble popped. And, with a glut of homes still on the market, housing prices could fall further. Why is it taking so long for the housing market to sort itself out?

The answer may have something to do with a coin toss.

I recently visited Eric Johnson, a professor at Columbia's Business School. He offered me a sweet bet on the flip of a coin. If the coin came up heads, I would win $6. If it came up tails, I would lose $1.

I told him I'd take the bet.

Of course, this is irrational. The bet is still very much in my favor. If I took the bet 1,000 times, I'd almost certainly make a nice profit.

Still, Johnson said a lot of people are like me: They won't take that bet. So I went out on the street to test this out on random people.

I introduced myself to Frank Blake, a guy who makes his living as a stuntman, jumping through windows and crashing cars. I offered him the bet — told him I'd pay him $15 if he won, and he'd only have to pay me $10 if he lost.

Lots of other people turned down the bet, too.

As it turns out, our brains feel losses and gains unevenly: Losing feels worse than winning feels good.

So now — as promised — back to housing.

In a down market, people really don't want to sell, because selling feels like losing.

Chris Mayer, professor of real estate at Columbia Business School, found evidence for this fear of losses when he studied the Boston condominium bubble in the '80s.

He would compare two basically identical condos. The owners of both had paid off their mortgages. But one had bought at the peak of the market. That person, he found, would stubbornly ask for a higher price, and keep his condo on the market longer than the other person, who had bought at a lower price. (Here's the study.)

"The overall magnitude of this effect is very big," Mayer told me. "This is an important factor in how housing markets operate."

There are certainly other reasons the housing market is taking so long to sort out. Some people are stuck financially with their mortgages, for example.

But this psychological quirk is also slowing the healing process. It makes people reluctant to lower the asking price on their homes, which in turn contributes to the glut of houses on the market.

"It's sort of like having a Band-Aid, where you know you would be better off if you just pulled it off at once," Johnson said. "But instead what you do is you tend to pull it off very slowly, if at all."

It's unclear why our brains are wired this way — why we overemphasize losses. Johnson says it could go back millions of years, to when a losing bet was way more serious.

Millions of years ago, we were avoiding animals that wanted to eat us. Today, we're selling houses.

But some part of our brains may be still be thinking about leopards in the trees.