Accessibility links
Jobs Report: It All Depends On How You Look At It : Planet Money Today's employment report is confusing. The job market is neither as awful nor as promising as the report suggests. While the decline in unemployment represents a slightly brighter picture reported by people, it's largely driven by people giving up and by statistical fluctuations. 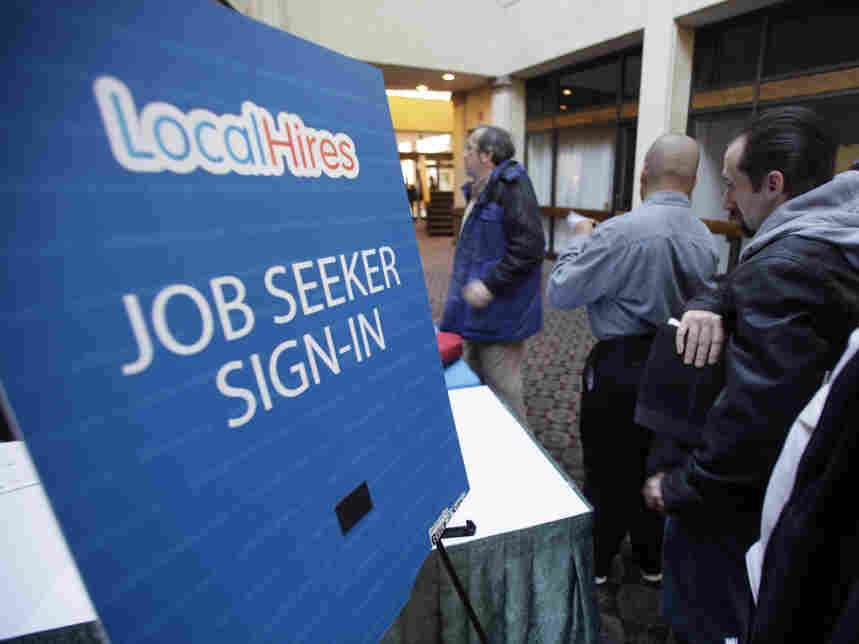 The big January jobs report out this morning is confusing.

The nation added only 36,000 jobs during the month — not even enough to keep up with population growth, much less make a dent in unemployment.

At the same time, the unemployment rate fell sharply, from 9.4 percent to 9 percent.

There are a few answers to this question. But before I wade into the weeds, here's the bottom line: The job market is probably not as awful as number of new jobs suggests, nor is it as promising as the sharp decline in unemployment suggests.

(By historical standards, of course, the job market is still very grim.)

Update: For more on the long-term jobs picture, see our post, 6 Ways Of Looking At The Jobs Numbers

The first thing to remember about the latest numbers is that the jobs report is the result of two separate surveys.

One is a survey of businesses, which is used to determine the total number of jobs added and lost each month. So that's where the 36,000 new jobs figure comes from.

The other is a survey of individuals, which is used to determine the unemployment rate. That's where the 9 percent unemployment comes from.

But there are at least a couple other factors at work.

The unemployment rate is based on the size of the labor force — that's everybody who has a job, and everybody who does not have a job but is looking for one. So people who are out of work and aren't looking don't count as unemployed.

That means when people give up on looking for a job, the labor force shrinks — and the unemployment rate falls.

Part of the decline in unemployment in January was due to people giving up.

But an even bigger part of the decline was due to a government revision of some basic population numbers (explained here) that are used to estimate the size of the labor force.

So while the decline in unemployment represents a slightly brighter picture reported by people around the country, it's largely driven by people giving up and by statistical fluctuations. In other words, the decline isn't nearly as promising as it sounds.

The labor force participation rate — the percentage of healthy, working age people who have a job or are looking for a job — is now at its lowest level since the early '80s, according to Calculated Risk.

Unfortunately, the survey of businesses — the source for the number of jobs gained and lost — doesn't give any indication of the effect of the weather.

But there are signs that bad weather hurt job creation in January. In the survey of individuals, nearly 900,000 people said they couldn't get to work at some point during the month.

And job losses were stark in industries that are particularly affected by weather, such as construction, transportation and temp work.

If weather was indeed a big factor in keeping job growth down January, we should expect to see a strong rebound in job growth later this spring, as numbers bounce back from weather-suppressed lows.

Here's more on how snowstorms can affect the jobs numbers.