Accessibility links
Could A Computer Do Your Job? (Cont'd) : Planet Money "...the notion that putting more kids through college can restore the middle-class society we used to have is wishful thinking."

Could A Computer Do Your Job? (Cont'd)

Could A Computer Do Your Job? (Cont'd)

...the notion that putting more kids through college can restore the middle-class society we used to have is wishful thinking. It's no longer true that having a college degree guarantees that you'll get a good job, and it's becoming less true with each passing decade.

The column draws heavily on the work of MIT Economist David Autor, who has written extensively about the disappearance jobs that pay middle-class wages — including some of the white-collar jobs often filled by college grads.

As Autor wrote in a paper last year:

The pattern holds true in many developed countries, according to Autor. The reasons are familiar: "the automation of routine work and, to a smaller extent, the international integration of labor markets through trade and, more recently, offshoring."

In blog post, Krugman republishes this useful table from an older Autor paper. Basically, you want the tasks you do in your job to fall in the column on the right (nonroutine tasks), not the left (routine tasks). 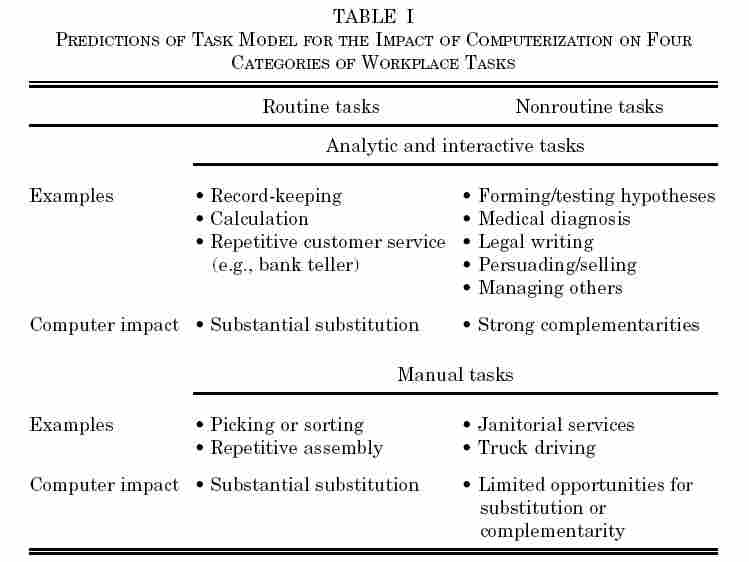 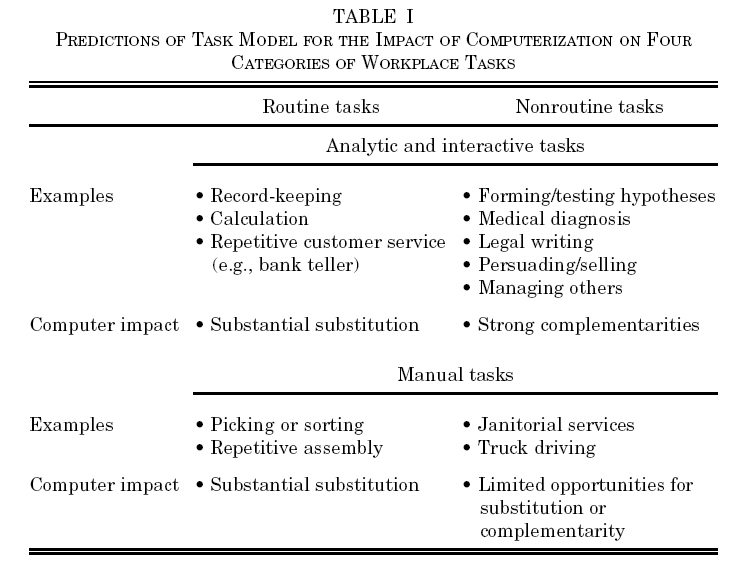 In his column, Krugman argues for restoring bargaining power to labor, and for guaranteeing health care to everyone. Autor has argued for sending more people to college (even though a college degree isn't a guarantee of a middle class job, it's a big step in the right direction).

And from Remapping Debate, here's Autor's take on the prospects for people who aren't college-bound:

There are good jobs for those workers that don't require a college degree, Autor said, but in most cases they will require some sort of post-secondary skill development. He cited several medical paraprofessional jobs as examples: X-ray technician, phlebotomist, EMT.

The problem, he said, is that compared to the formal and informal networks that guide people through careers at the top of the earnings pyramid, there is no comparable information mechanism farther down the scale. As a result, "you see people just casting about." The recent growth of for-profit and other alternative education programs shows the demand for guidance and training, Autor said.