Accessibility links
Groupon's Secret: Everybody Has A Price : Planet Money Groupon — and all coupons — are based on what economists call price discrimination. Merchants want to sell the same goods at different prices, depending on the customer.

Listen
Groupon's Secret: Everybody Has A Price

How much would you pay for a burger with lettuce, tomato, pickles, onion rings, cheddar and bacon?

At Corner Burger in Brooklyn, Hilda Hampar charges $9.25. At that price, tables in her restaurant often sit empty.

So she made a deal with Groupon. It sent out an offer to its thousands of subscribers: $18 dollars' worth of Corner Burger food for nine bucks. 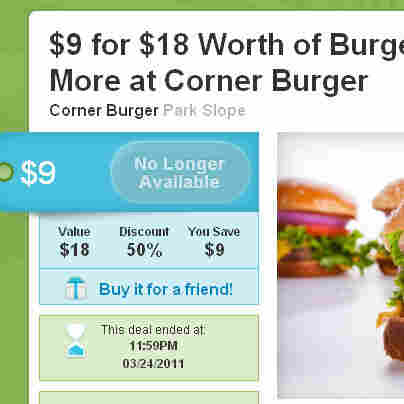 "The next day [after] the coupon came out, this place was full," she says. "People were waiting outside."

Good news, except for one daunting piece of math.

Groupon charges a 50 percent commission. That leaves only $4.50 for Hampar to pay for the food and the overhead. For Corner Burger to make money, it had to squeeze something more out of the coupon customer.

And, even better, the Groupon might persuade some cheapskates to give Corner Burger a chance.

Economists call this price discrimination: The ability to sell the same product at different prices, depending on how much customers are willing to pay.

This was always the principle of haggling — which Monty Python got exactly right in Life of Brian. You remember the scene:

HARRY THE HAGGLER: Ten?! Are you trying to insult me?! Me, with a poor dying grandmother?! Ten?!

BRIAN: All right. I'll give you eleven.

HARRY THE HAGGLER: Now you're gettin' it. Eleven?! Did I hear you right?! Eleven?! This cost me twelve. You want to ruin me?!

Haggling had perfect price discrimination. You could size up the rich folk and jack up the price. Or lower the price for the poor bloke walking away. Each time, you maximized your profit.

In the 1800s, though, with giant department stores opening, it became more efficient to post a single price. The volume of customers and sales was high, and the people making the sales weren't store owners but low-paid employees.

So they invented coupons.

"If somebody is willing to scan the newspapers, clip the coupons, go to the store, and redeeem the coupon you can be fairly certain that that individual is a price-sensitive individual," says University of California, Irvine economist Richard McKenzie.

Paper coupons had a good run. But somewhere in the past couple of decades, they ran out of steam. Once they started to show up everywhere — even on the store shelves — they stopped driving business like they used to. They just offered the same deal to everyone.

This is where Groupon comes in. Groupon is different in several ways. Here are a few:

Groupon (and its revenues) grew so quickly that Google reportedly offered $6 billion to buy it. And Groupon turned Google down.

Now the coupon rush is on. This week in New York City, hundreds of daily-deal companies came together to look for investors and make deals. The place was full of people who said things like this:

Using coupons is hip. The one thing Groupon has done for the whole space is make the coupon business sexy. Think about going on a date with your girlfriend: When was the last time you brought a coupon with you? And it's not an embarrassment anymore.

The new coupon craze does have a downside. It took 100 years for paper coupons to overwhelm consumers. In just two years, there are now more than 400 daily-deal sites. Businesses report getting calls every day from another Groupon clone wanting to do a deal.

Hilda Hampar, the burger lady, just got a call from Google. It's getting into the business and wants her to offer another burger deal. She took it. Even if it brings her only 10 people, that's 10 new potential customers.

And if the lines are out the door?