Accessibility links
Why Are Credit Card Agreements So Long? : Planet Money We talk to a lawyer who writes credit-card statements — and to an expert who tries to make them simpler. 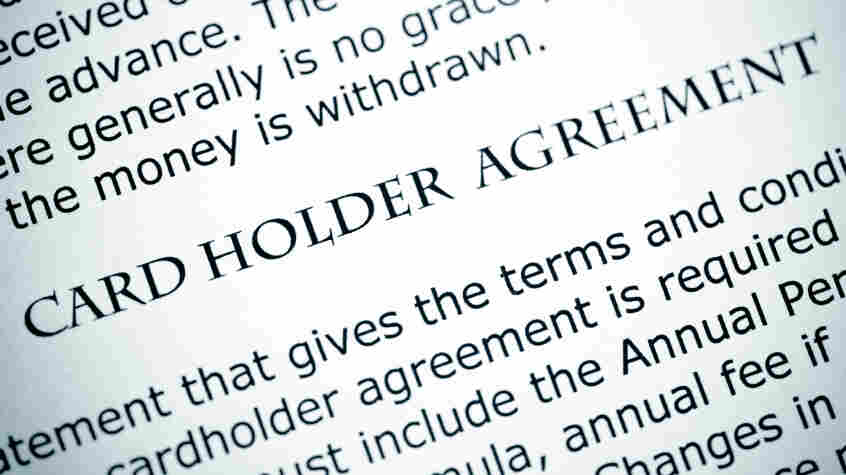 She has a file full of them, and when I visited her recently, she pulled out some of her favorites.

She opened up a department store credit card agreement, held it four feet above ground and let it unfold to the floor. I asked her to read me part of it.

I asked her: Do you read that and think that's very clear what that's saying?

"Yeah," she said. "I do. You have a billing period. We tell you the charges are separate depending on the plan."

It didn't seem clear at all to me. But Roberta did make a pretty convincing case that credit card agreements have to be exactly as ridiculous — as long and abstruse — as they are.

I was writing an agreement over the weekend and the client said, "Well, you know, I'd rather not have too much legalese."

Because there are terms such as "herein." "As set forth herein." If I'm not going to use herein I have to say, "as set forth in this agreement." So I now have three words where I had one.

Simpler language, Roberta says, makes the document longer. You can print it in eight-point font so it'll fit on three pages, but then people complain they can't read it.

The biggest expander of our credit-card paperwork is Congress. Every decade or so, Congress demands that our credit card companies and financial institutions tell us more.

So Roberta has to write more.

What happens if you lose your credit card? How quickly can you access your money? What are the different kinds of accounts? How do the terms differ if you're in New Jersey or Nebraska? What about online banking?

Roberta says that if she doesn't write "you have to pay us back," borrowers may try to get out of paying their bill.

Of course, just because the companies write these things, it doesn't mean anybody reads them. That's where Susan Kleimann comes in.

She's sort of like the financial document cryptographer for the people. When Congress passes a new law that requires banks to change the way they communicate with us, Susan gets a call. And she proceeds to study every word and centimeter of the pages we receive in our mailboxes.

"If something looks difficult, people assume that it is difficult and they won't read it," she said."Headings help. White space helps. Breaking things into lists helps."

A new Consumer Financial Protection Bureau, created by the bank reform bill, wants finance companies to produce financial documents that are easier for people to read.

Roberta points out that the changes will probably make credit card agreements more specific — and longer. But Susan says if it'll get people to even look at these things, maybe just skim, that's a major accomplishment.