Accessibility links
Self-Fulfilling Prophecy: The Bailout Of Fannie Mae And Freddie Mac : Planet Money Fannie Mae and Freddie Mac grew too big to fail. Then the mortgage giants followed the subprime lending industry into the abyss.

The Rise And Fall Of Fannie And Freddie 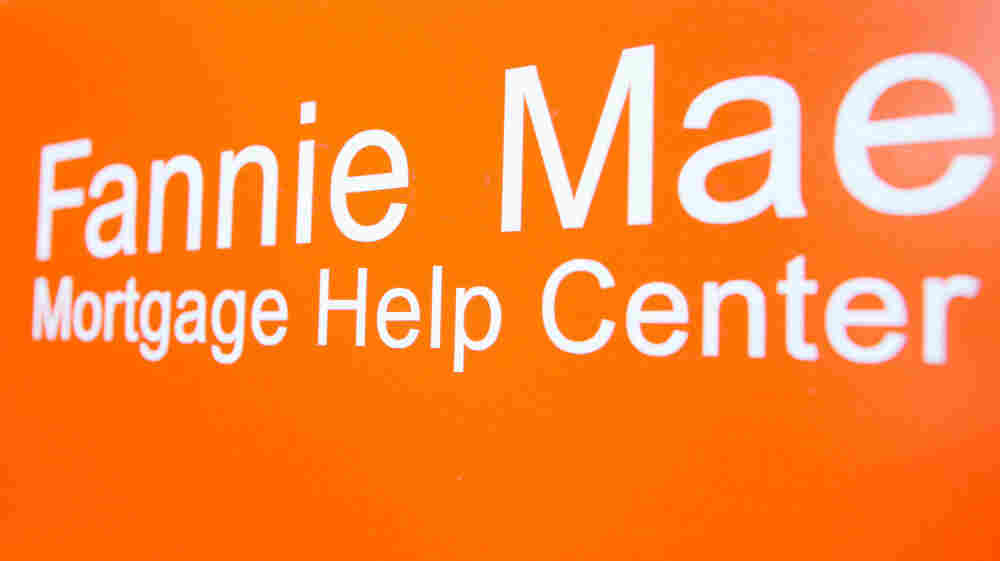 This is part two in our three-part series on Fannie Mae and Freddie Mac. Read part one, "Kill Them, Bury Them," and part three, "What's Next?"

By the beginning of the 21st century, almost half of all the mortgages in America were made through Fannie and Freddie.

Fannie and Freddie were private companies, with shareholders and highly paid CEOs. But they'd achieved this dominance because of the implicit guarantee they had from the U.S. government.

Because the world believed the government stood behind them, Fannie and Freddie paid less to borrow money than any other financial institution in the country. This gave them a big advantage.

Despite the fact that the implicit guarantee had turned Fannie and Freddie into two of the largest and most powerful companies in US history, people continued to deny that the guarantee existed.

At the top of every security that Fannie and Freddie issued, right there in big black letters, it said, "This security is not backed by the U.S. government."

High-powered government officials from both parties also denied that the guarantee existed. In 2003, Democratic congressman Barney Frank put it this way:

And in public, Fannie and Freddie would "adamantly lash back at anybody who argued that there was in fact a government subsidy," according to New York Times columnist Joe Nocera.

But to some of the people who mattered — the ones who were buying Fannie and Freddie securities — the companies said something else entirely.

Scott Simon was one of those buyers. He works in the mortgage department at Pimco, the world's largest bond manager, and one of the biggest buyers of Fannie and Freddie securities:

"Fannie and Freddie in meetings with investors, whether it was us or anybody else, essentially just would sort of laugh and say, 'Well, you know the government will stand behind us,'" Simon says.

Truer words were never secretly spoken. But when the bailout finally did happen, it happened in a way almost no one would have foreseen.

For decades, Fannie and Freddie had used their implicit government guarantee to get huge and powerful. But they got huge and powerful in a pretty boring way. They dealt mostly with standard, 30-year, fixed-rate loans. Borrowers had to document their employment and income, and most made a down payment of 10 to 20 percent.

But then, in the mid-2000s, subprime lenders came on the scene, making loans to people with no income and no jobs.

This kind of easy money made going through all the work to get a Fannie or Freddie loan unappealing for many borrowers, according to Barry Zigas, who was an executive at Fannie Mae during this time.

Imagine a customer going through the lengthy process of qualifying for a Fannie Mae loan, scraping together a down payment, showing up at the bank office, with all the requisite documents in tow.

"And they walk out and in the parking lot is a broker saying, 'Would you like a home loan? Cause let's sit down right here in my car.... We'll do the paperwork right now.' Which was literally what was happening," Zigas says. "And as a consequence, the Fannie Mae share of the market in mortgage backed securities dropped."

We now know that the subprime broker in the parking lot was a sign that we were in the midst of the largest housing bubble in national history.

So, after much hand-wringing and internal soul-searching, Fannie and Freddie decided they would follow the subprime industry into the abyss. Fannie and Freddie started accepting lower credit scores, stopped requiring proof of income from all borrowers, and invested in securities made up of subprime loans.

It was "total corporate delusion," says journalist Bethany McLean. "It wasn't actually until really the summer of 2008, when everybody kind of realized the obvious, which was: The mortgage market is falling apart. Fannie and Freddie are the biggest players in the mortgage market. Oh my goodness, what are we going to do?"

In fact, the end came to Fannie and Freddie so swiftly that it caught even their own employees by surprise.

In the late summer of 2008, Jacob Kosoff, a junior-level analyst at Freddie Mac, was feeling confident enough to go on a multi-week honeymoon to Peru.

One day during the trip, Kosoff was hiking the Inca Trail with his new wife and wearing a t-shirt that said, "Freddie Mac, we make home possible." Someone walked by and said, "Oh, Freddie Mac. I heard you guys went out of business."

As Kosoff recalls now, "Random people I don't know, are telling me that my firm, which I had left two weeks ago to go on vacation, no longer existed."

In the fall of 2008, these companies that had grown enormous by trading on the belief that the government would bail them out, finally got what they'd promised. Fannie and Freddie were on the hook for trillions of dollars all over the world — to foreign governments, huge pension funds, a good chunk of the world's banking system.

This is part two in our three-part series on Fannie Mae and Freddie Mac. Read part one, "Kill Them, Bury Them," and part three, "What's Next?"