The Rise And Fall Of Fannie And Freddie 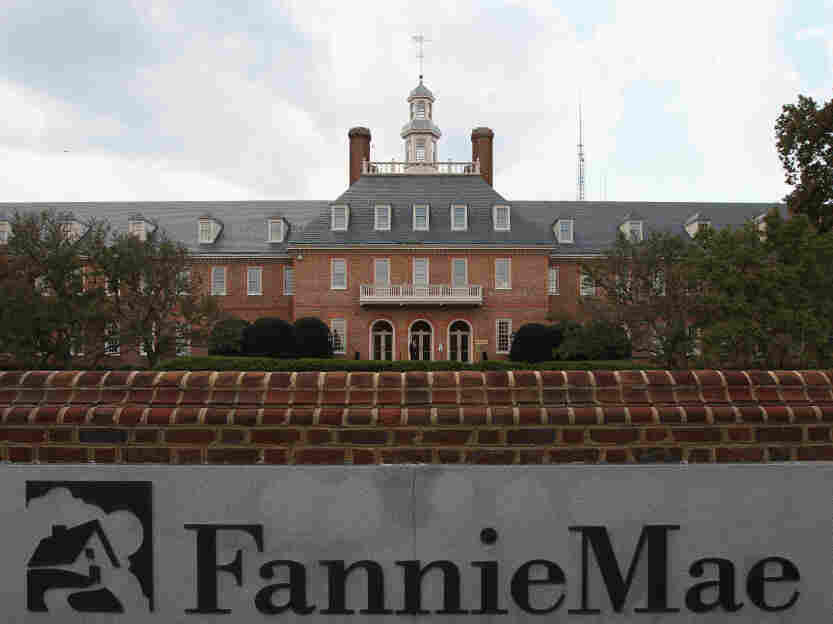 Before the financial crisis, many Americans had never heard of Fannie Mae or Freddie Mac. Today, we own them.

The federal government took over Fannie and Freddie after bailing them out in 2008. The bailout cost taxpayers more than the bailouts of GM, Goldman Sachs, Bank of America and Citigroup combined.

By 2010, roughly 90 percent of all new mortgages issued in this country went through the U.S. government. For all intents and purposes, the $1.5 trillion U.S. mortgage market is now a government-run industry.

How did we get here? What happens next? We've teamed up with Bethany McLean and New York Times columnist Joe Nocera, authors of the book All the Devils Are Here, to answer those questions in a three-part series.

Total cost to taxpayers, as of March 2011. Several large banks are not listed because they have repaid their bailouts in full.

This isn't the first time the government has owned Fannie Mae; it started as a government agency. During the Great Depression, President Franklin Roosevelt wanted to help poor people buy houses. He started an agency nicknamed Fannie Mae to make mortgages more available.

Fannie Mae remained part of the federal budget until 1968, when President Lyndon Johnson was facing big deficits due to the Vietnam war.

"So Fannie was sort of spun off, as a division, almost like a corporate spin-off," Nocera says. "And there really was nothing like it in American life."

With just one stroke of the legislative pen, Johnson had ushered into existence perhaps the strangest hybrid entity in the annals of American finance. It was an organization created by the government with an explicitly public mission, but it behaved exactly like a private corporation, with highly paid executives and profits going directly to private owners. In 1970, the government created a second, nearly identical, entity called Freddie Mac.

This strange, hybrid status gave Fannie and Freddie a very real advantage over other, traditional companies: Investors believed that even though Fannie and Freddie were private companies owned by shareholders, they were backed by the U.S. government.

This implicit guarantee wasn't official. "But it was as good as gold," according to analyst Karen Petrou.

The financial world assumed that since the U.S. government had given birth to Fannie and Freddie, the government would bail them out in a crisis. Because of this implicit government guarantee, Fannie and Freddie could borrow money more cheaply than other firms. This gave them a huge advantage in the marketplace.

Starting in the early 1980s and continuing for the next two decades, Fannie and Freddie used the implicit guarantee to grow into two of the largest and most successful companies in US history.

Even as Fannie and Freddie were making those profits, they were passing on risk to the taxpayer, according to Richard Baker, a former Republican congressman from Louisiana and a longtime critic of Fannie and Freddie.

In the language of finance, Fannie and Freddie didn't have enough capital — the money financial institutions use as a buffer, in case of emergency. Fannie and Freddie were allowed to hold less than half as much capital as regular banks. This made them riskier, but also more profitable.

"Nothing before or since, in my judgment, has ever been as effective as their lobbying strategy," Baker says. "If you were a financial services industry lobbyist available for duty in the 1990s and you were not hired by Fannie or Freddie ... you were really not much of a player."

The Fannie Mae lobbying operation achieved legendary status on Capitol Hill. It was rumored they could cost you a committee assignment, or even your job.

Now, this is the point in the story where you'd expect to hear denials from Fannie Mae, saying the tales about their lobbying have been exaggerated. Not so.

"It was always an us against them," says Bill Maloni, Fannie Mae's chief lobbyist, who left the company in 2004.

Here's how he jokingly describes Fannie's approach to critics: "If you punch my brother I'll burn down your house. I want to kill them, bury them, and piss on their graves."

One of Maloni's favorite ways to attack Fannie's critics was to play the home-ownership card.

Congress had set goals for Fannie and Freddie, saying that a third to a half of the loans they dealt with were to go to low- and moderate-income people.

So, Maloni argued, Fannie got special treatment because Fannie was special. Fannie helped regular people achieve the American dream of home-ownership. And many people I talked to within the companies spoke proudly of this affordability mission. They really believed it.

"Literally to a person, from cafeteria workers on up, we felt we were the most important thing in the nation with regard to helping low-, moderate- and middle-income families afford home ownership," Maloni says.

But this view probably wasn't true, according to Dwight Jaffee, an economist at UC Berkeley who has spent his career studying the U.S. housing market.

"All of the money and all of the tax benefits and all of the Fannie and Freddie costs ... have come to zero in terms of having any observable effects on our home ownership rates," Jaffee says. "Our rates are the same as countries that have never put a penny of government resources into it."

So how could Fannie and Freddie have taken a government subsidy and, according to Jaffee, produced no benefits?

This is part one in our three-part series on Fannie Mae and Freddie Mac. Read part two, "Self-Fulfilling Prophecy," and part three, "What's Next." For more bailout data, see ProPublica's "Eye on the Bailout."