Accessibility links
Why We Left The Gold Standard : Planet Money A key moment in economic history includes a nervous breakdown, a global panic, and a presidential adviser who was an expert on cows and chickens. 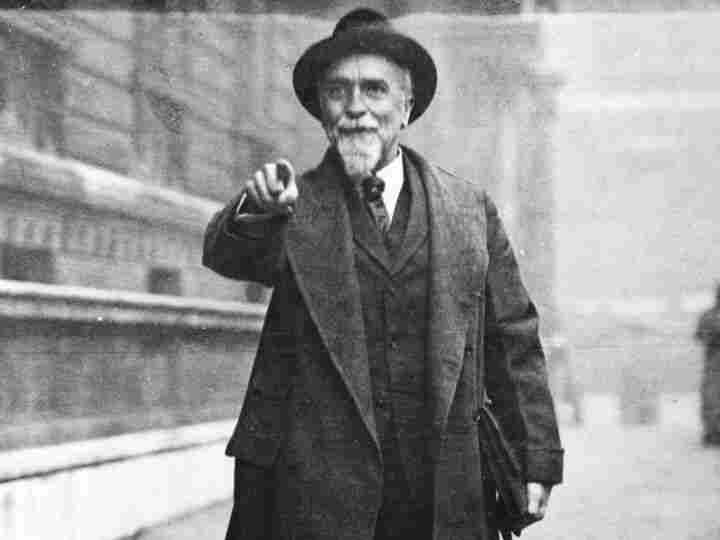 Gold is up. The dollar is down. People are worried about the value of paper money.

There was a time, of course, when paper money was backed by gold — the era of the gold standard. The story of why that era came to an end includes a nervous breakdown, a global panic, and a presidential adviser who was an expert on cows and chickens.

The gold standard was a promise. If you had a dollar, you could take it to the government any time you want, and trade it in for a fixed amount of gold. In the U.S. year after year, $20.67 got you an ounce of gold.

In the early part of the 20th century, all the world's key economies were on the gold standard.

But in 1931, the system began to unravel in the most powerful country in the world: England. When the Great Depression hit, the people in England panicked, and started trading in their paper money for gold. It got to the point where the Bank of England was in danger of running out of gold.

This was a terrifying thought — particularly for Montagu Norman, the head of the Bank of England.

Norman faced an impossible dilemma: It was becoming increasingly difficult for England to remain on the gold standard. But abandoning it was unthinkable for Norman and his contemporaries, who came of age at a time when the gold standard was the unquestioned anchor of the global monetary system.

Norman's response to this dilemma: a nervous breakdown.

"The pressures of the job got to him, and he collapsed one day," says Liaquat Ahamed, author of the book Lords of Finance. "He thought that the future of Western Civilization was in his hands, and he basically couldn't function."

Norman's doctor told him to leave the country and get some rest.

While he was gone, his colleagues at the Bank of England realized they had no choice. They were about to run out of gold. So they abandoned the gold standard.

It was like a bomb went off. People all over the world thought, if England can do it, anyone can. And all around the world, as countries' economies got worse, people started turning in their paper money for gold.

When President Franklin Delano Roosevelt gave first fireside chat on March 12, 1933, the U.S. had just had the mother of all bank runs.

"Because of undermined confidence on the part of the public there was a general rush by a large portion of our population to turn bank deposits into currency or gold," Roosevelt said.

When he gave this speech, Roosevelt knew the gold standard was a problem. But he wasn't sure what to do about it.

In fact, his top economic advisers were telling him to stay on the gold standard. They felt the same way as Montagu Norman: Gold was what held everything together.

But there was one guy advising FDR to leave the gold standard – an economist who Ahamed describes as a "crank."

"George Warren had helped him deal with some of his trees on his estate," he says. "He was an agricultural economist."

Warren had written a book on dairy farming, and devised a system for getting chickens to lay more eggs. He had also done a lot of work studying the way the gold standard affected commodity prices and the economy.

He told FDR that the country had to leave the gold standard – and Roosevelt took his advice.

When FDR told his advisers about the decision, "they all exploded," Ahamed said. Dean Acheson, assistant secretary of the Treasury, resigned. Another adviser said it would be the end of Western Civilization.

But it wasn't. The experts of the day were wrong about the gold standard.

"Most economists now agree 90% of the reason why the U.S. got out of the Great Depression was the break with gold," Ahamed says.

Going off the gold standard gave the government new tools to steer the economy. If you're not tied to gold, you can adjust the amount of money in the economy if you need to. You can adjust interest rates.

Almost all economists agree, the system we have today is better than the gold standard. Not perfect, but much better.

Listen to our podcast, "Gold Standard, R.I.P.," and read our entire series on gold and the meaning of money.