Accessibility links
In '01, The U.S. Budget Picture Was Rosy. What Happened? : Planet Money A decade ago, the U.S. was projected to be on the road to budget surpluses. What happened? Two recessions, two tax cuts, and two wars, among other things.

A decade ago, the U.S. was on the road to running budget surpluses. Now, we're deep in the hole. What happened?

A new paper from Pew compares CBO projections from January, 2001 with what actually happened in the ensuing decade.

In a single graph, the paper shows the the key shifts that drove up the debt over the past decade: 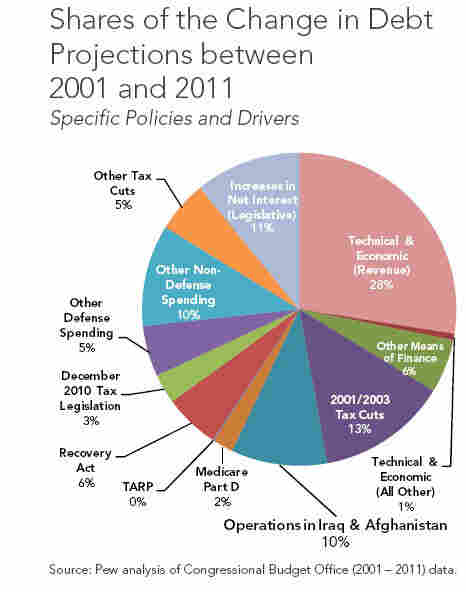 Most of the categories are self explanatory, but the label on the biggest one — "Technical & Economic (Revenue)" — is pretty jargony.

It means the government brought in less money than projected, even after accounting for unexpected changes to the tax code. That happened because the country went through two recessions (one relatively minor, at the beginning of the decade, and one huge, at the end of the decade).

Here's what that one means: Because of tax cuts and spending increases, the government spent more money and raised less than the CBO projected. As a result, the government had to borrow more, which led to more interest payments on the debt.