Accessibility links
The Gap Between Rich And Poor Is Increasing In Lots Of Countries. Why? : Planet Money Over the past few decades, the gap increased in almost every country in the developed world. Here are three reasons why.

The Gap Between Rich And Poor Is Increasing In Lots Of Countries. Why?

The Gap Between Rich And Poor Is Increasing In Lots Of Countries. Why?

Over the past few decades, the gap between rich and poor increased in almost every country in the developed world.

Here's a key graph from a new OECD report: 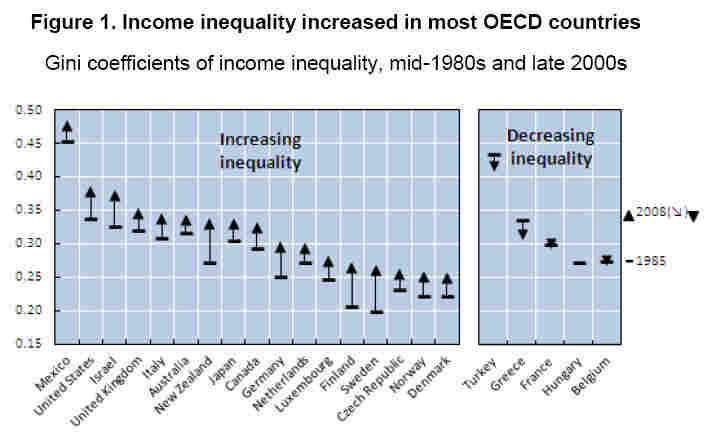 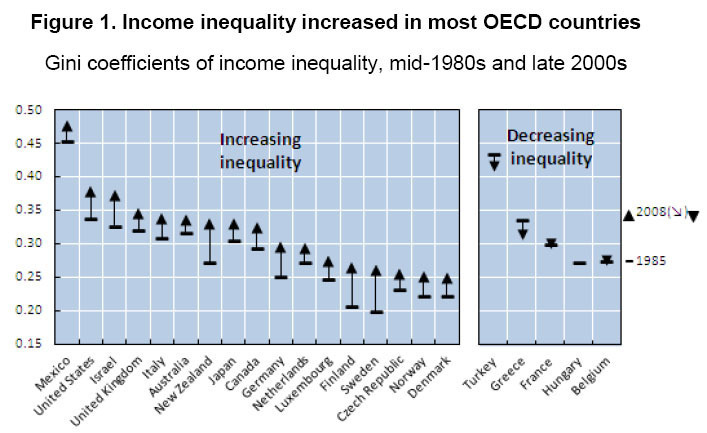 Why is this happening? Here are three possible answers from the report.

Trade barriers have come down. Technology has advanced. The combination of these two factors has disproportionately benefited highly-skilled workers. You want to be the guy building the robot, not the guy whose job got replaced by a robot.

Inequality is calculated by household, not by individual. And a few changes at the household level have driven some of the increase in inequality.

Single-parent households and single-person households without children have also become more common. Both groups are disproportionately likely to be at the bottom of the income ladder.

State ownership of corporations has declined. Price controls have become less common. Minimum wages have fallen relative to average wages. Legal changes have made it easier to fire temporary wokers.

Taken together, these changes have actually improved overall employment levels. (Businesses are more likely to hire workers when they can pay lower wages and when it's easier to fire people.)

But despite the gain in employment, the same shifts may also have driven up inequality. In the words of the report, "the high-skilled reaped more benefits from a more dynamic economy."