Accessibility links
An Internet Rock Star Tells All : Planet Money Jonathan Coulton's songs almost never get played on the radio. He doesn't have a contract with a music label. Yet he's a one man counterargument to the idea that musicians can't make money making music. In 2010, his music brought in $500,000. 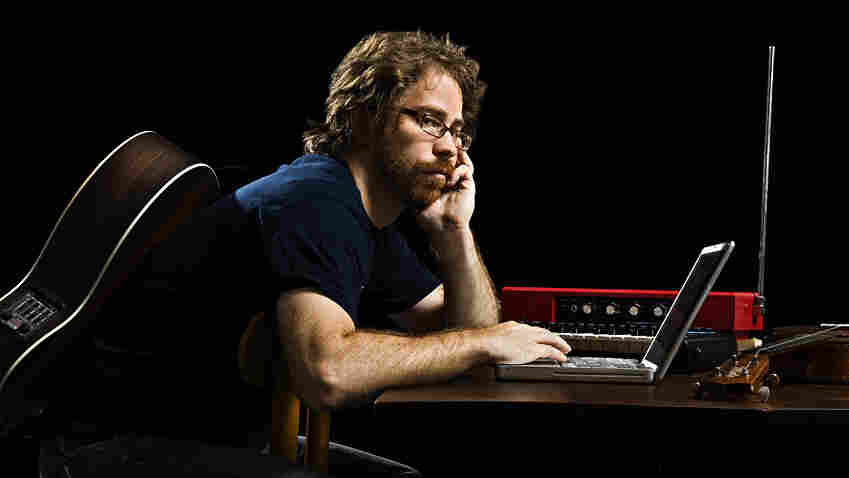 Another day at the office. Dale May hide caption

Jonathan Coulton's songs almost never get played on the radio. He doesn't have a contract with a music label. Yet he's a one man counterargument to the idea that musicians can't make money making music.

In 2010, Coulton's music brought in about $500,000 in revenue. And since his overhead costs are very low, most of that money went straight to him.

Did he ever expect to make that kind of money as a musician?

Jonathan Coulton's music is funny, melodic and pretty nerdy. One of his hits — I'll explain later what "hit" means in Coulton's case — is a song called Re Your Brains. It imagines a pleading email written by an ex-office mate who's now a zombie.

We're at an impasse here, maybe we should compromise:
If you open up the doors,
We'll all come inside and eat your brains.

So how did Jonathan Couton take this song, and another 97 like it, and — without the aid of a record label, or any outside support really — turn them into half a million in annual revenue?

The Internet, of course. On Coulton's bare-bones website, you can see lyrics to all his songs, read his blog, connect with other fans. And, of course, you can buy his songs for a dollar a piece.

So Coulton doesn't need a label to sell his music.

Traditionally, though, labels also marketed you, got your music on the radio, got you that first hit. Jonathan Coulton managed this without a label, too, taking a very different path to fame.

You've always needed a lucky break to make it in the music business. Coulton's was a semi-autobiographical song called Code Monkey, about a lovelorn computer programmer.

Coulton put it up on his site and it soon got posted to a tech discussion board called Slashdot, one of the largest and most influential tech sites on the Internet.

"So here was this song about a sad tech geek, and it was an arrow shot directly to the heart of the tech geek community," Coulton says. "That was the equivalent of me being discovered by some impresario or getting to go on the Ed Sullivan show when nobody knew who I was. That was my breakthrough."

Twenty years ago, before the Internet and social media took off, could he have made a living as a musician?

"Twenty years ago, I moved to New York City to make a living as a musician, and instead I got a software job," Coulton says. "So the answer is no."

So is Coulton a beacon that other musicians can follow? Or is he an anomaly, a niche musician who, through a lucky fluke, found an equally niche audience.

Coulton says sure, he's niche. But there are a lot of niches out there for others to find, with more forming all the time. After all, he says, that's what the Internet is.

For more Planet Money on the music industry, listen to our interview with Damian Kulash of OK Go.