Accessibility links
What Is The IMF, Anyway? : Planet Money Why the arrest of Dominique Strauss-Kahn matters for the global economy. 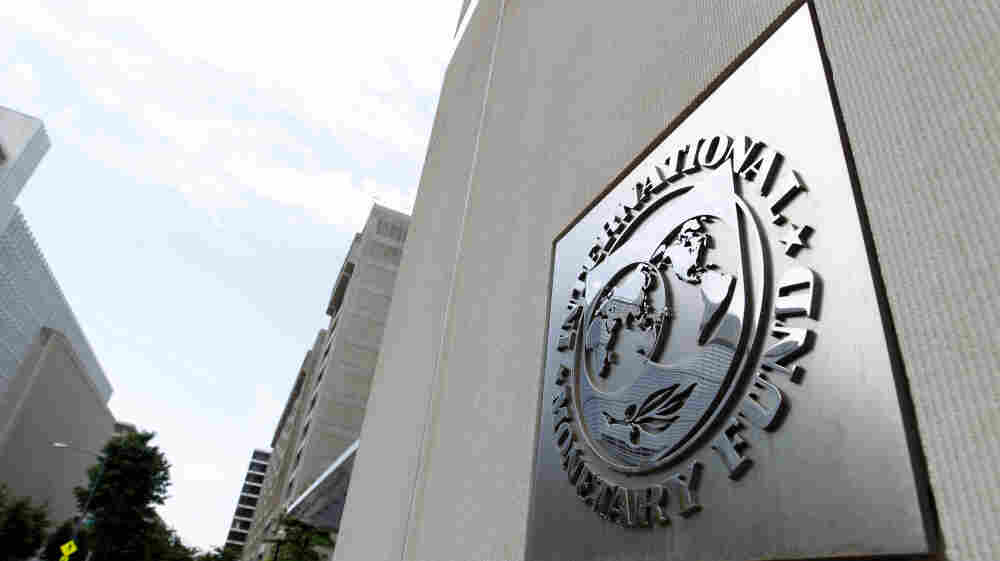 The arrest of Dominique Strauss-Kahn on sexual assault charges leaves a vacuum at the top of the International Monetary Fund at a key moment for the global economy.

I'll get to that in a minute, but it's worth pausing here to answer a more basic question: What is the IMF, anyway?

You can think of it sort of like a credit union for countries, says Eswar Prasad, a former IMF economist who now works at Cornell and the Brookings Institution. Its members — countries from around the world — put money in. And the credit union lends that money out to members that need it.

This makes the IMF sound all warm and fuzzy. And for several decades after the IMF was created at the end of World War II, it was pretty warm and fuzzy.

At that time, the world's major currencies were fixed — a dollar was always worth the same amount of British pounds, the same amount of French francs, etc. (This is a bit of an oversimplification, but it gives the basic idea.) This was known as the Bretton Woods system.

During this time, the IMF made short-term loans to help countries keep the value of their currency fixed. The biggest recipient of IMF loans during this era was the UK, according to Prasad.

But Bretton Woods was dismantled in the 1970s, and the world of money changed profoundly. In the new world, the value of global currencies changes constantly. (A year ago, one British pound bought you $1.45; today, it buys you about $1.60.)

So in the 1980s and 1990s, the IMF took on a new role: Lending to developing countries in that were going through major economic crises. During this era, the world's opinion of the IMF became decidedly less warm and fuzzy.

The Fund is based in Washington, and it's largely controlled by the U.S. and Europe, which contribute a big chunk of the fund's loan pool. What's more, IMF loans always come with strings attached — recipients typically have to make big spending cuts, among other things.

Not surprisingly, having an institution controlled by rich countries dictate harsh terms to poor countries during times of intense crisis created a lot of tension and resentment.

So in the past decade, developing countries that didn't want to be beholden to the IMF started saving up their own rainy-day funds, full of dollars and euros.

"What the Asian financial crisis [of the late 1990s] did was it gave emerging market economies a very strong desire to stay out of the clutches of the IMF," Prasad said.

The total value of foreign-exchange reserves held around the world has risen from $2 trillion in 2000 to $6 trillion now, according to Prasad — and almost the entire increase has come from countries in the developing world.

But as developing countries like China, India and Brazil were stashing aside money for a rainy day, countries at the edges of Europe were heading for fiscal disaster.

And so, over the past year, the focus of the IMF has shifted back to Europe.

The IMF has been a key player in the bailouts of Greece, Ireland and Portugal. For one thing, it has contributed a significant chunk of the money. For another, the presence of the IMF has also made it politically more palatable for the recipients to agree to the terms of the bailouts.

But, in the past few weeks, a big, new problem has arisen: It's become clear that Greece is so far in the hole that it probably won't be able to pay off all its debt on time.

Strauss-Kahn's arrest means Greece's day of reckoning — and the potentially widespread fallout — may be coming sooner, rather than later.

Strauss-Kahn has been pushing for Europe and the IMF to be lenient, and to lend Greece more money, Prasad said. German leaders, on the other hand, have been resisting lending more to Greece.

"Given the fact that Greece has missed virtually every target, if it was an emerging market, the program would not be going forward," Prasad said.

So without Strauss-Kahn running the IMF and pushing for leniency, Greece's immediate future is less secure.

Greece is a relatively small country. But if it declares to the world that it can't pay off its debts, the ripple effects could be big. Banks in other European countries that hold Greek debt could suffer losses, which could in turn affect the broader financial system.

What's more, a Greek restructuring could spook investors, and make them less willing to lend money to other troubled European countries. That could lead to broader, deeper financial troubles around Europe and, perhaps, beyond.