Accessibility links
One Voter Tries To Decide Whether To Pay For Bankers' Mistakes : Planet Money To decide how to vote, a young mother in Iceland talks to economists, the debt market and a regular guy. 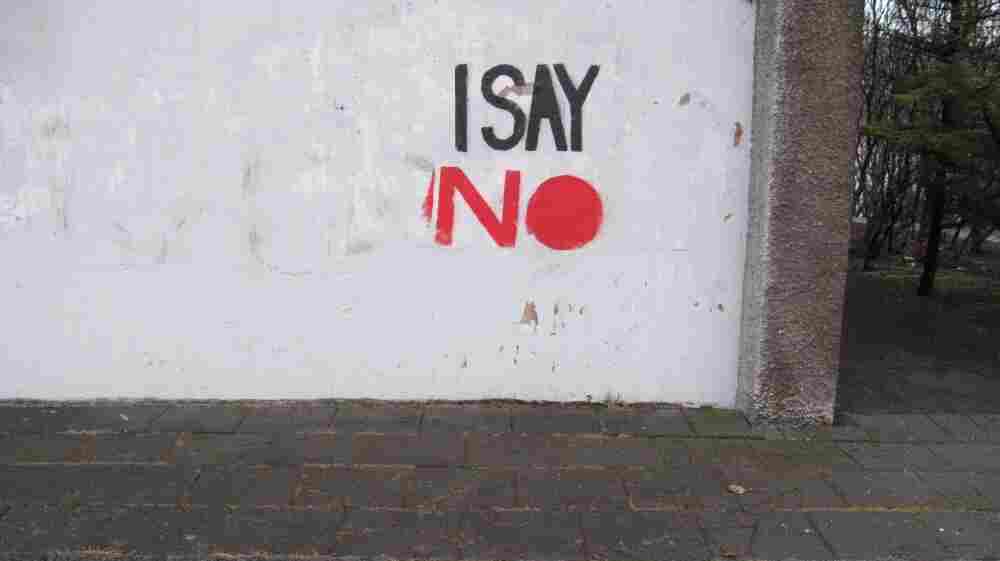 Last weekend, the people of Iceland went to the polls to make a big decision: Should they pay for the mistakes of a bank that failed in the financial crisis?

It was called Landsbanki. During the boom, its balance sheet became larger than Iceland's entire economy. Its high-interest savings accounts attracted hundreds of thousands of people from the U.K. and the Netherlands.

So the question, up for a national vote: Should the people of Iceland repay the money the foreign depostiors lost? It could be a lot of money — a few thousand dollars for every man, woman and child in Iceland.

The nation was divided. The only thing people agreed on was that the country's economic future could hang in the balance.

I was in Iceland in the days before the vote. And I wanted to help Heiða Dóra Jónsdóttir — 29 years old, new mother — decide how to vote. I told her I'd set up interviews with whatever experts she wanted to talk to.

We start out by going to see Gylfi Zoëga, one of her econ professors from college. He looks very, very weary.

Yes, he says, it feels wrong to pay for a mistake you didn't make. But he thinks Iceland should vote yes.

"It's very difficult for a small country like this to have an economic recovery if you are at war with your neighboring countries at the same time," he says.

If Iceland votes no, he tells her, it could make a lot of enemies in Europe. And if Iceland gets cut off from Europe, it's just a tiny island in the middle of a very cold ocean.

"This is the entry ticket into the rest of the world," he says.

A major concern is that if Iceland votes no and doesn't help repay the depositors, the rest of the world will treat Iceland like a deadbeat. Anytime Iceland wants to borrow, the world might charge a much higher interest rate.

She asks the global debt market what would happen if Iceland votes no.

The global debt market, in the person of Jonathan Lemco, a soverign risk analyst at Vanguard, gives her this answer:

That would make investors like us nervous. We can pick and choose all over the world to invest, we don't have to invest in Iceland. I wish I could be more uplifting. ... I know it's unpleasant and it sounds cruel. Its just, the market just wants to get repaid.

So you might think the economic case is pretty clear. But maybe not.

Right down the hall at the economics department, another economist, Ársæll Valfells, urged Heiða to ignore what the bond guy from Vanguard said.

"That's a very typical comment from a bond guy," this economist said. "My experience from working within the financial markets is that greed does not have a memory"

In other words, if bond guys can make money lending to Iceland, they will.

There's another group of people Heiða worries about, though. There were real people who put their money in an Icelandic bank, thinking it would be safe. If she votes no, is she hurting them?

So we make a call across to England, to someone who had money in one of these bank accounts. His name is Clayton Nash. He says the account paid a really high interest rate. He says he lost a lot of money when the bank failed.

When the Icelandic bank failed, the U.K. government stepped in and gave U.K. depositors their money back. The Dutch government did the same in the Netherlands.

Heiða wants to do the right thing. But she doesn't want to be a sucker.

Clayton has already been helped. And Heiða's little nation would really be repaying the gigantic British and Dutch governments. Just for comparison, the population of the U.K. is 200 times larger than Iceland.

"I can definitely see both sides," she says. "That's whats difficult. That's why I change my mind every 10 minutes."

The next day is voting day. In the morning Heiða and her boyfriend Gísli Eyland, put their baby in a big stroller and go to her polling place.

Heiða walks into the voting booth and pulls the curtain closed. Her boyfriend and I watch from a distance.

"I think she hasn't decided yet," Gísli says. "Her hand is moving back and forth."

Heiða emerges from the booth. How did she vote?

"I said no," she says. A wide majority of other voters voted the same way. The people of Iceland have decided not to repay the U.K. and the Netherlands.

Those goverments are appealing. They are taking Iceland to the international courts. Taking the case back, out of the hands of the many, and putting it again in the hands of a few.