Accessibility links
Looking For A High-Tech Job? Try Cotton. : Planet Money If you want a good job, find a company that creates something that nobody else has. It doesn't have to be computers or biotech; it could be cotton seeds. 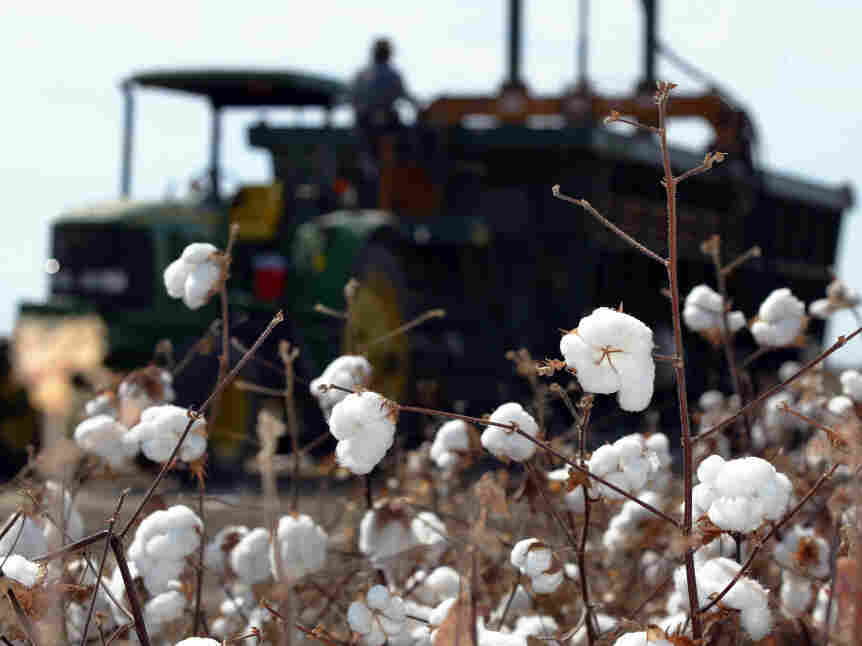 Unemployment is still at 9 percent, leaving more than 12 million Americans without work. But there are bright spots in the U.S. economy. Planet Money and Wired Magazine have spent the last six months scouring economic data and interviewing people around the country to find out what areas of our economy are doing well. It's part of a series called Smart Jobs.

Let me boil our findings down to one quick tip. If you want a job — a good job, a job that will be around for a while and pays well — find a company that creates some new product or service that nobody else has.

That doesn't just mean computer companies in Silicon Valley, or biotech in Boston. One of our biggest surprises is that high-tech innovation exists in all sorts of old industries, in places you'd never suspect.

For example: a greenhouse in Memphis, Tennessee.

The greenhouse is owned by Bayer CropScience, part of the German aspirin company. Bayer is the leading seller of cotton seed in the U.S. And the company is continually coming up with new versions of its genetically modified cotton seeds.

"You can think of these plants as being wired differently, as having protocols and capabilities and functions that they didn't already have," Balducchi says. "These are new abilities that we're building in."

Cotton seed is a billion-dollar business. Bayer and the other leading company, Monsanto, battle every growing season for market share by trying to convince farmers that they have the latest, coolest cotton technology.

It's not just plant specialists with PhDs. Al Balducchi does have a master's in plant breeding, but he tells me they have plenty of jobs that don't require a master's.

Craig Grady goes around all day long, fertilizing cotton plants. His job doesn't seem particularly high-tech: He takes flowers from one cotton plant and rubs them on the flowers of another.

"We pop the flower off, and then fold the petals back," he says. He's pollinating them, like a bee would do.

This job is fairly routine, but it's important. One mistake could contaminate the greenhouse and ruin millions of dollars of research. So Bayer hires good people and pays them well. Craig, the human bee, has a college degree and says he loves his job.

At this one site, Bayer CropScience employs more than 50 people — some with PhDs, some with only high-school diplomas. That's typical of an innovation-focused company.

Balducci takes me to the genetics testing lab, where the next step in the cotton-development process takes place. There's an industrial-strength blender they use to grind up seeds and leaves, as part of the process of checking if they have the right genes.

There are many more jobs in cotton in China and India and parts of Africa than in the U.S. But they are really bad jobs. Planting, weeding, picking cotton by hand.

In the U.S., one cotton farmer with a tractor and genetically-modified cotton can grow and harvest about as much as 800 farmers in the developing world.

That's a typical innovation trade off: Lots of really bad jobs in China or India turning out the standard, commodity version of a product, compared with far fewer but much better jobs here in the U.S. creating the new version.

We and our partners at Wired discovered this trend in all sorts of industries.

Most standard t-shirts are made in China or other poor parts of the world in huge mills, with many, many workers. But here in the U.S., fashion-forward, high-end t-shirts are designed by well-paid designers, sewn in far nicer plants where people make more money. Same for auto plants, electronics manufacturers, even oil refineries.

So, a rule of thumb: If the company you work for provides a product or service that's pretty much the same as what was offered last year and a few years before that, it might be time to start looking for something new.