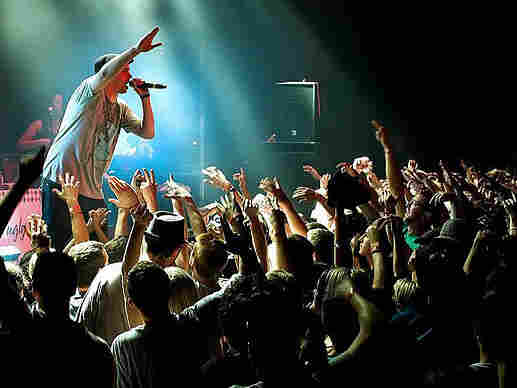 A night at the Slowdown. Enrico Fuente/Flickr hide caption 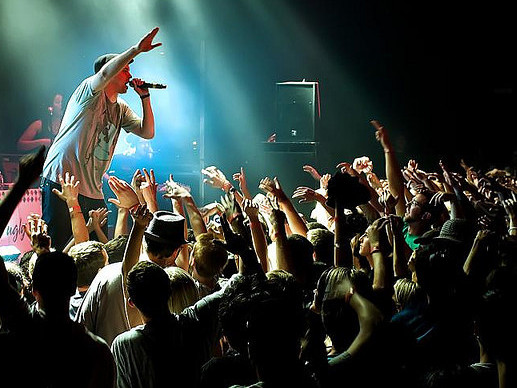 A night at the Slowdown.

Planet Money and Wired Magazine have teamed up to look at the future of work in the U.S. Last week, we looked at high-tech jobs in the cotton industry. Today, we explore a story that unites indie rock, hipsters, and massive investment in real estate development. It all takes place in what is becoming a surprisingly cool city: Omaha, Nebraska.

I'm at one of the most interesting cultural events I've been to in years. It's at a new art-house movie theater in Omaha.

Fellini's masterpiece Amarcord is just ending. A group of artists from around the world is going to discuss how their work compares to this celebration of small town life.

The movie theater, Film Streams, is a marvel. It's brand new, gorgeous and only plays sophisticated independent films. Next door is the Slowdown, which Esquire called the best indie-rock club in the country.

The Slowdown — like Film Streams and almost everything in Omaha that's very cool — is very new.

While I was there, I met several architects and web designers who all said they moved back to Omaha, at least in part, because of this club and the movie theater next door.

They're part of a remarkable wave in Omaha: Professionals are moving back.

It all started with some young guys and some surprisingly good music.

Back in the 1990s, there was a small, underground music scene in Omaha, centered around the sketchy and possibly illegal club, the Cog Factory. Local kids played what became a well known sound: Omaha Indie Rock. The scene gave rise to bands like Cursive, Bright Eyes, and The Faint.

But Omaha just wasn't the kind of place to nurture a music career.

Omaha had always been a town devoted to business: first fur trading, then stockyards and railroads. Folks who wanted a cultural life tended to move to bigger cities.

Robb Nansel ran a local label called Saddle Creek Records. But his bands wound up with nowhere to play: The Cog Factory closed because it had never paid any taxes.

Nansel and a college friend, Jason Kulbel, decided Omaha should have a music venue — a cheap place for bands to play. They looked at a bowling alley and some abandoned warehouses. They spent a long time battling a community group scared of young punks ruining the neighborhood.

"It took eight years or something like that before it became a reality," Nansel says.

In those eight years, Jason and Robb grew up and learned how to be businessmen, how to work with a bank and real estate developers. They borrowed several million dollars and built this new complex.

Opening the Slowdown and Film Streams, creating this community of artists, caught the attention of local developers. They spent hundreds of millions in the neighborhood--creating live/work spaces, cool offices in reclaimed warehouses, a bunch of nice new restaurants.

One developer said that those three friends--Jason, Robb, and Rachel Jacobson, who created the theater and club — have brought at least $100 million in value to the city. Jason assures me they didn't get any of it. They're all still broke.

Correction: An earlier version of this story misspelled The Faint. Thanks to the commenters who pointed out the error.