Accessibility links
The Failure Tour Of New York : Planet Money Success always starts with failure, the economist Tim Harford argues in a new book. So we set out in Manhattan to find big ideas that didn't work out. 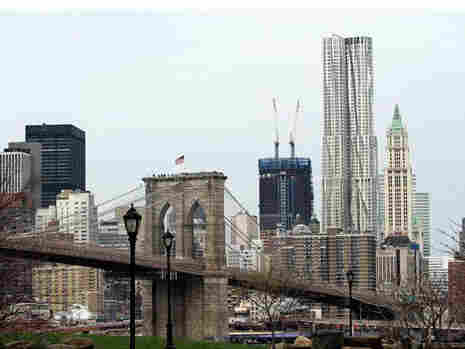 Harford, an economist and author, isn't just being kind. He argues in his new book, "Adapt," that success always starts with failure.

And so we've set out across Manhattan to look for some of those big ideas that didn't work out.

Out first stop is the main library. In the lobby is a classic example of how even things we consider successful were flops at the time: a 15th-century Bible printed by Johannes Gutenberg himself.

Gutenberg was a genius, but he wasn't much of a businessman. He borrowed money to print the bibles. How could you go wrong selling one of the most popular books of all time?

"He ran into debt. Got into an argument with a business partner, and that was it," Harford says.

It was a classic foreclosure situation. The lender sued Gutenberg, went to court, and confiscated the printing presses. Gutenberg's innovations in movable type would end up making other printers rich. Instead of working on massive Bibles, they could make a fortune printing short, easy papal indulgences for the Catholic Church. Basically, the cushy government contract of its day.

"We tend to discard this long, tangled history of failure that leads to these successes," Harford says. "Most successful businesses basically have train wrecks behind them."

So that's how one man's business flop changed the world. But what happens when big companies fail?

We head downtown to 233 Broadway — better known as the Woolworth Building.

"It's a truly amazing building," Harford says. "And of course the building is still here and Woolworth's stores aren't ."

In the late 1800's, Frank Woolworth was sort of a retail Gutenburg. His great idea: a store where you put merchandise on the shelves. No more clerks having to get your ball of twine for you.

Woolworth failed a few times with the concept. When he eventually figured it out, his competitors were quick to copy him

"That's the truth in a lot of market innovations: Somebody comes up with a good idea, everyone copies it," Harford says. "The old way of doing things, which doesn't work, gets wiped out. And thats' how success builds on failure . Its a selection strongly in favor of the ideas that are working."

For a while, Woolworth's was one of the largest retailers in the world. Then Walmart and other big box stores snuck up on them. By 1997, Woolworth's was closing its last U.S. stores. We could debate all day about what Woolworth's did wrong, but Harford argues that its failure was crucial.

Wall Street, as it happens is just a few blocks from the Woolworth building. So it's impossible not to ask the obvious question: Ho does Harford's theory of failure fit with the recent failure of Wall Street and the financial system?

The problem with the Wall Street crisis, Harford says, is that "it wasn't possible for failures to be isolated ... It wasn't this sweeping away of old ideas and replacing by new ideas... you just get the entire edifice collapsing at the same time."

The problem isn't that companies screwed up. It's that they couldn't fail without causing widespread economic chaos.

"And of course we have this classic phrase now, too big to fail," Harford says. "That really tells you what was wrong with Wall Street : We created institutions that couldn't fail safely."