Would A $5-A-Day Minimum Wage Make Life Better In Haiti?

Would A $5-A-Day Minimum Wage Make Life Better In Haiti? 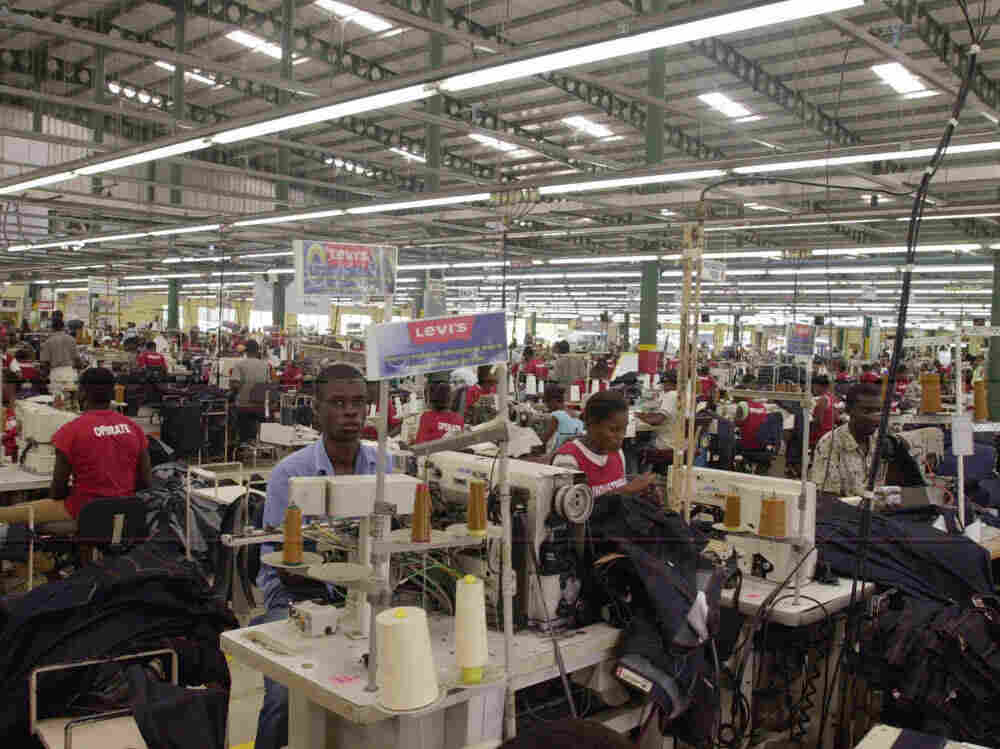 Today, The Nation and Haiti Liberte posted a story about some Wikileaks memos that reveal that "Contractors for Fruit of the Loom, Hanes and Levi's worked in close concert with the U.S. Embassy when they aggressively moved to block a minimum wage increase for Haitian assembly zone workers."

In 2009, before the earthquake, Haiti's parliament passed a new minimum wage law mandating that people working in Haiti's apparel factories — mostly cutting and sewing t-shirts — must make a minimum of $5 a day.

Now, of course, to an American audience this seems so minor, so unbelievably reasonable, it's hard to see how there can be any opposition: Five bucks a day? As a minimum? It's easy to be outraged that the U.S. government wouldn't push for a minimum of more. Who can live on five bucks a day?

I've been covering Haiti's apparel industry for the last year and a half, and I'd like to place this in some context.

Decent statistics are hard to come by in Haiti, but most studies show that more than half of Haitians live on less than $1 a day. Around 80 percent live on less than $2 a day. So, making three bucks per day puts a person into a small elite of high earners. Life in Haiti is still pretty tough on three bucks a day, but those workers are less likely to be hungry or have hungry kids, they're more likely to send their kids to Haiti's schools (most of which charge amounts out of the reach of the very poor).

Of course, any worker would rather make $5, but would a $5-a-day minimum wage make life better in Haiti?

Here's how I think that question through.

Haiti's industry is focused on commodity white T-shirts for brands like Hanes. The commodity white T-shirt is one of the cheapest, easiest things in the world to make. With $500,000 you could buy a bunch of used sewing machines in Alabama or Guangzhou, rent a cement shell in some poor country, and be in business in a few weeks.

T-shirt producers have the steps down to a science: you have a line of 14 or so workers, each one doing one tiny operation — sew the sleeve onto the shirt, sew the hem, sew the neck band. A decent, experienced manager can take just about any illiterate farmer anywhere in the world and have them sewing T-shirts right away. T-shirt fabric is fairly cheap, so it doesn't matter that much if a worker messes up a few shirts. And T-shirt fabric is quite forgiving — the sewer doesn't need to be all that precise.

Since it's so easy and cheap to move production from one country to another, and since the work requires no prior skill, commodity T-shirt production is highly competitive. If Haiti doesn't work out, it's not so hard to pick up stakes and move to Honduras or Nicaragua or Madagascar.

Since commodity T-shirts are, well, a commodity, T-shirt manufacturers primarily compete on price. Squeezing a fraction of a penny per shirt can mean the difference between getting that big Wal-Mart order or going out of business.

All this is to say: When a country is in the commodity T-shirt game, they are at the very lowest, least attractive rung on the ladder of industrialization. They are beggars, fighting with lots of other poor countries for whatever business they can get and the competition is over price. And Haiti has many barriers to offering a competitive price. Haiti has horrible infrastructure--among the worst ports, roads, electrical power grids, and water supplies in the world. Haiti is politically unstable, making large investments unattractive.

Haiti has been desperately trying to seduce apparel manufacturers to build plants, but they've found it tough going. Haiti has a few benefits: The U.S. has given duty-free access for certain Haitian-sewn apparel, Haiti is awfully close to the U.S., and Haitians demand much lower wages than anybody nearby.

Honduras and Nicaragua are also pretty close to the U.S., and they also get duty-free access to the U.S. But workers in those countries get slightly higher wages. So, move the Haitian minimum wage up to $5 per day and it's hard to see why any company would choose Haiti over Central America.

Now, of course, it would be wonderful if Haitians could make far more than $3 a day on average for working in an apparel mill. But — as history shows — that requires that Haitian workers and Haitian factory managers develop the skills to do more complex things than just make a T-shirt. T-shirts are so cheap, there just isn't much profit in there to pay anybody well. Some Haitian factories do make polo shirts and other higher skill products, and they pay better. If Haiti can move up to much higher-end production — like luxury items, say, for chic New York stores — then Haitians' will make even more money.

This has been the story of industrial development throughout the world. In England, in the early days of the industrial revolution, workers began making simple, coarse cloth and then learned and developed skills and inventions and eventually made far more complex and valuable goods. Their wages rose along with their skill. Then, New England stole some Brit technology, developed its own coarse cloth business and then learned to make higher value goods. This story, of course, has been repeated in the American South, Japan, Korea, Taiwan, China. A surprisingly large number of countries that are middle- or high-income today were able to move out of pre-industrial subsistence agriculture by first adopting low-end textile and apparel manufacturing and then developing greater and greater skills.

Part of Haiti's tragedy is that it was, once, farther down the road of industrial development than it is today. From the 1970s through the early 1990s, Haiti developed some decent, higher-skill apparel factories and even some electronics assembly factories.

But years of political instability, misrule, and a U.S.-led embargo during Haiti's post-Aristide dictatorship all but destroyed the local industry. By the time Haiti was ready to develop its industry again in the past five years, global manufacturing technology and trade had been so thoroughly transformed that Haiti had to, basically, start all over.

Haiti was never a truly industrial nation. Even at Haiti's industrial peak, only a couple percent of Haitians worked in manufacturing. It's one of the world's poorest countries, where most people subsist on minimal calories grown on meager plots of land.

The Nation article suggests that the US government conspired to steal a couple bucks a day from Haitians and put it in the hands of rich American corporations. It implies that the U.S. government could just as easily have insisted that companies pay more and the only result would be richer Haitians. It's hard to reconcile that view with the facts: Even at these very low wages, even with special trade deals that give some Haitian exports tax-free access to the U.S., Haiti is having a terribly hard time attracting more industrial investment. Haiti only has a bit more than 50,000 textile jobs now. The government is hoping to triple that number in the coming years, but is way behind schedule.

The U.S. is certainly not blameless in Haiti's current straits. Inspired by slave-holding Southerners, we refused to recognize or trade with the state after it overthrew its French slave-owning overseers in 1804. We occupied the country, to disastrous results, from 1915 to 1934. We supported the horrible Duvalier regimes from the late 1950s to 1986. Haiti watchers will, surely, forever debate the pros and cons of US intervention during President Aristide's two aborted terms. And there's that devastating embargo in the mid-1990s (which President Clinton now says he "hated" but had to do). Anybody who has spent time researching the various international efforts to help Haiti has a long list of grievances against USAID.

But all that said, the current administration has made some promising moves. Cheryl Mills, Chief of Staff to Secretary of State Hillary Clinton, did shepherd through the largest recent investment in Haiti, a new industrial park in Haiti's poorest province--up in the Northeast--that will bring 20,000 jobs. They expanded (though many Haitians will say not by enough) apparel trade preferences and have paid for some programs to develop a better skilled workforce.

I recently spent some time talking to apparel manufacturers in the Dominican Republic, which shares the island of Hispaniola with Haiti. They told me how they developed a low-paying, cost-competitive T-shirt sewing industry in the 1980s and 1990s. But, today, their factories and their workforce have developed so much skill that nobody is willing to take those T-shirt sewing jobs. They're making much more money creating more expensive and complicated clothing.

In short, Dominican textile workers have real bargaining power because they have real, globally competitive skills. I'm sure manufacturers would love to pay them $3 a day, but they can't because the Dominicans know how to do stuff that commands a higher wage.

I have no idea what would happen if Haiti did have a $5-a-day minimum wage. But I do think it's reasonable to assume that some factories would close and far fewer new ones would be built. Far fewer Haitians would be allowed to take that first tentative step on to the ladder of industrial development.