Accessibility links
The Value Of College, In 2 Graphs : Planet Money In terms of both unemployment and earnings, the gap between high school and college grads keeps getting wider. But people keep questioning the value of college.

PIMCO's Bill Gross jumps on the college-bashing bandwagon in his latest note.

A mind is a precious thing to waste, so why are millions of America's students wasting theirs by going to college? ... Students ... can no longer assume that a four year degree will be the golden ticket to a good job in a global economy that cares little for their social networking skills and more about what their labor is worth on the global marketplace.

It's true that college is not a "golden ticket to a good job." But it makes a huge difference.

In 2010, the unemployment rate for college grads age 25-34 was 4.9 percent; the rate for those with only a high school degree was 13.7 percent. The gap was wider than it's been at any point in the past decade. 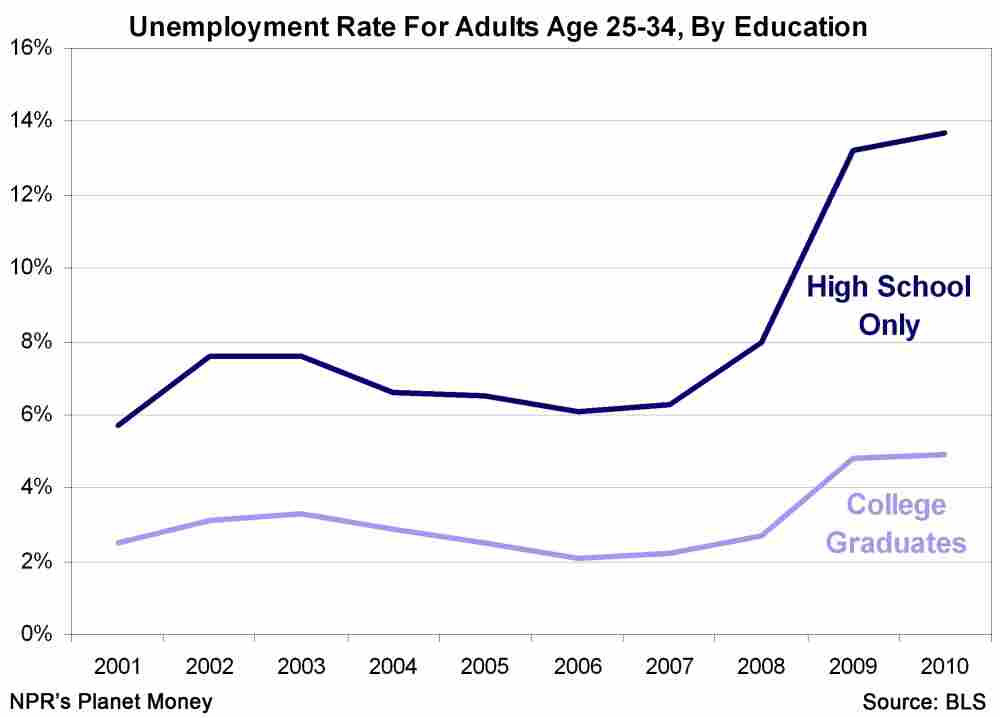 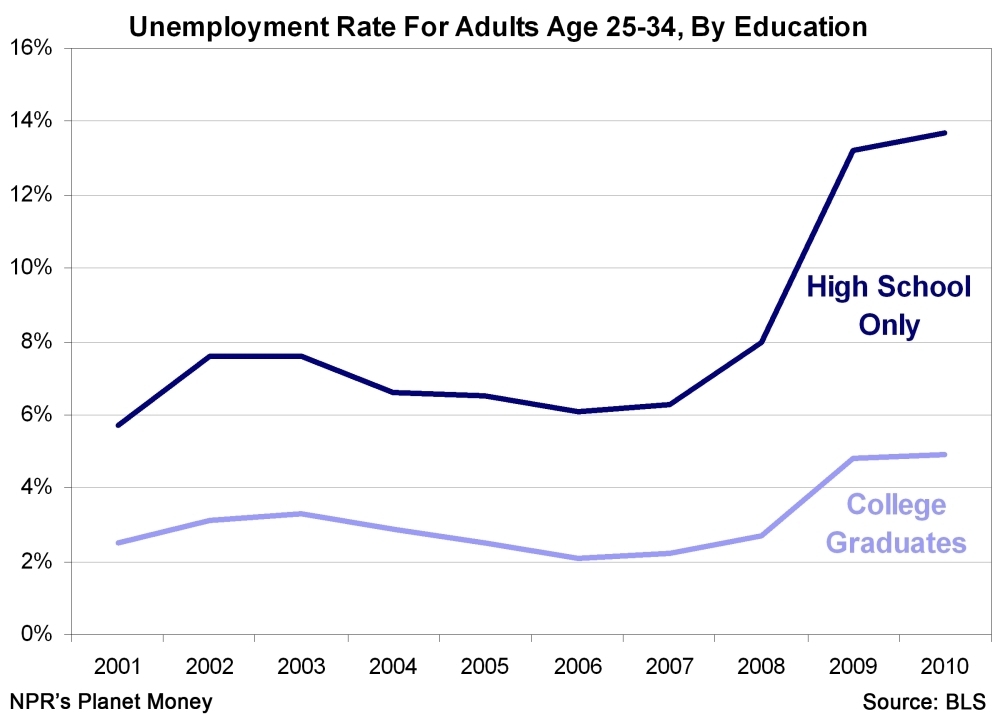 It's also true that, as Gross notes, the price of college has been rising much faster than inflation for decades. But the income gap between high-school and college grads has also been growing (largely because, after accounting for inflation, income has actually fallen for people with only a high school degree).

So a college degree is in fact worth more than it used to be. Gross alludes to this in passing as a "bump in earnings." But it's a very, very big bump. This graph shows how the full-time, full-year earnings gap has grown since 1980. 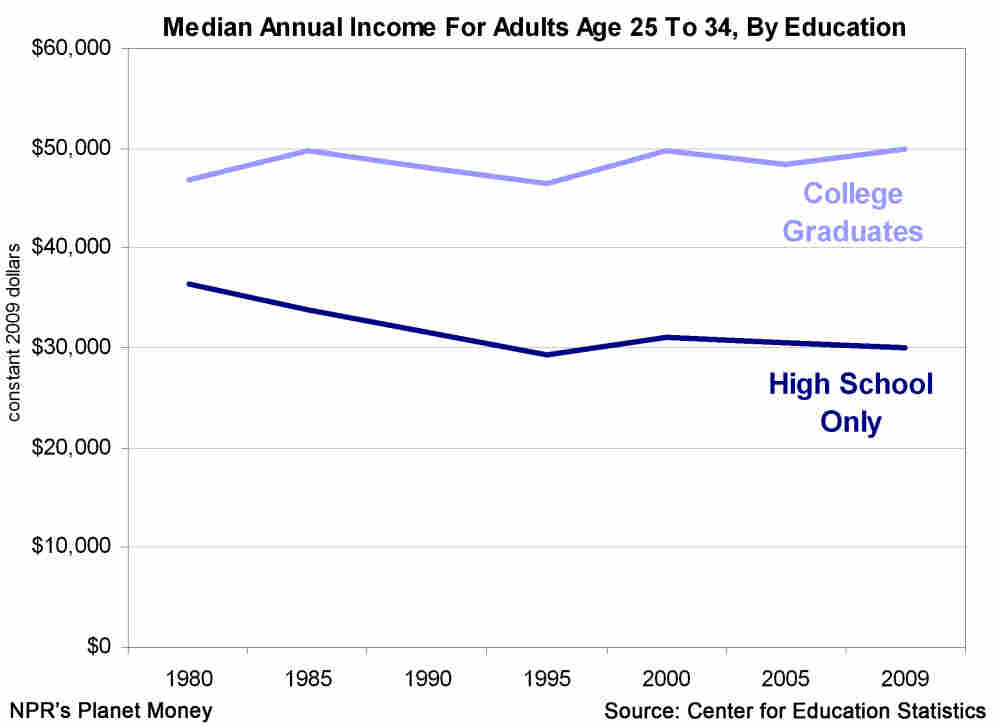 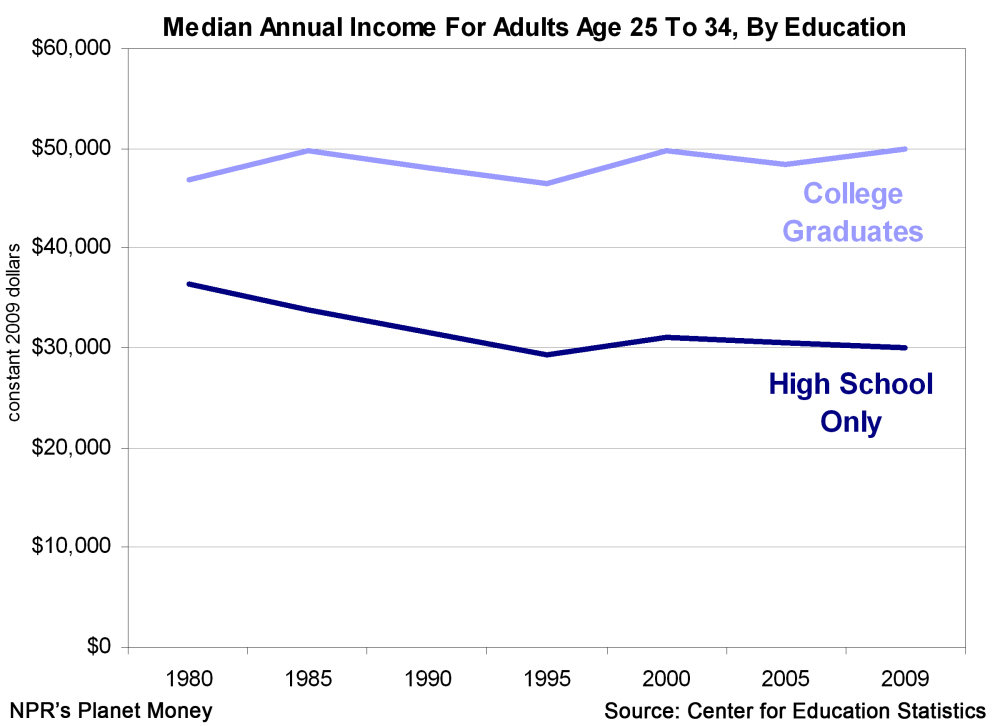 A number of commenters point out that correlation does not equal causation, and that underlying factors that drive students to graduate from college may also make them more likely to be employed and to earn higher wages — independent of the value of the college education.

This is clearly true. But it was also clearly true 10 years ago, and 30 years ago. And what the graphs show is that, over time, the gap between those with a high school degree and those with a college degree has increased. That suggests that the value of college is increasing.

Yes, it's theoretically possible that the underlying factors may be more valuable now than they were 10 years ago and 30 years ago, and that it's not the value of college itself that's increased.

But the only sure way to test that hypothesis would be to take a very large group of high-school grads, randomly assign half to go to college and half to go straight into the work force, then follow them for the next decade or so. And that's not going to happen.