Accessibility links
Home Price Rise May Be A Seasonal Blip : Planet Money Home prices showed a small rise between March and April. But it may have been just a seasonal blip.

The Latest On Home Prices: Meh

The Latest On Home Prices: Meh 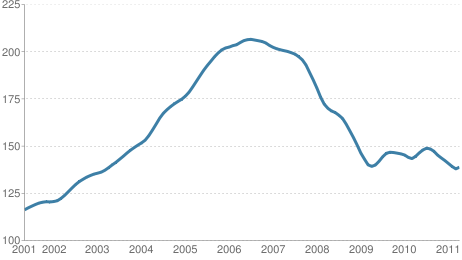 U.S. home prices rose by less than 1 percent between March and April, according to the Case-Shiller numbers released this morning. (See the tiny tick upward at right edge of the graph?)

It was the first time this year that the index showed a month-over-month gain. But the rise may just be a seasonal blip. As S&P (which puts out Case-Shiller) said in a statement this morning:

...much of the improvement reflects the beginning of the Spring-Summer home buying season. It is much too early to tell if this is a turning point or simply due to some warmer weather.

The index was down 4 percent compared to April of last year.

Here's how home prices fared over the past year in the 20 metro areas tracked by the index:

Here's more on today's numbers from the AP, Bloomberg and the CalculatedRisk.