Accessibility links
Spaceflight Is Getting Cheaper, But Not Enough : Planet Money Elon Musk wants us to live in other planets. First he has to make space flight affordable. So he took the fortune he made in Internet start-ups and started his own rocket company. 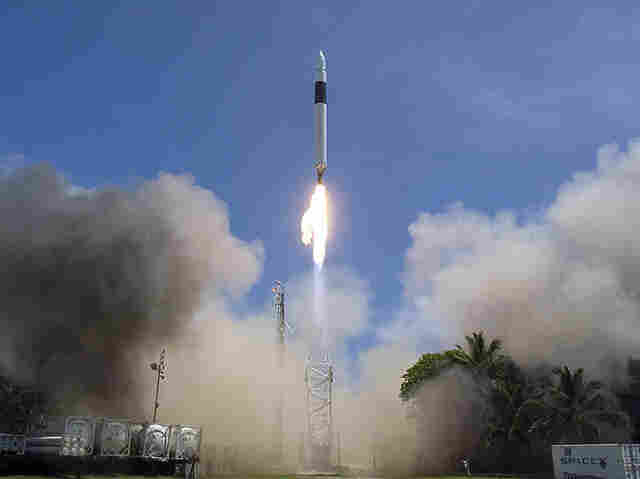 Elon Musk wants humans to live on other planets one day. But he's worried about the cost of getting there. So in 2002, he took the fortune he made in Internet start-ups and started his own rocket company. He called it SpaceX.

The company is still in its early days. It's had seven launches, four of which made it into orbit. According to the company's website, the price to put stuff in orbit runs around $2,000 to $3,000 per pound.

Musk says SpaceX's latest rocket in development, the Falcon Heavy, will be able to do it for as little as $1,000 a pound.

Historically, that's pretty low. Using the Space Shuttle to get a pound of something to the Space Station, for example, costs around $10,000.

But it isn't cheap enough to make spaceflight an ordinary event. Even at $1,000 a pound, sending a person into orbit would still run to more than $100,000.

It's hard to say precisely how those prices compare with SpaceX's competitors'. The industry is pretty secretive. Companies usually don't post prices on their websites and customers don't often talk about how much they spent.

But Jeff Foust, an analyst with the Futron Corporation, has done some calculations with the available data. He says that it's pretty clear to him that SpaceX is cheaper than its competitors. Perhaps even twice as cheap.

How has SpaceX been able to get the price so low?

The answer isn't in any big technological breakthroughs. Musk says that his company is just lean and smart. They make the engines themselves, for example, which saves money. He says his competitors, industry giants Lockheed Martin and Boeing, are wasteful and inefficient.

But Michael Gass, the President and CEO of United Launch Alliance, a joint venture of Lockheed Martin and Boeing, points out that price isn't the only thing to look at. There's also reliability: you don't want your multimillion dollar satellite blowing up on the launchpad.

Lockheed and Boeing have been launching for 50 years, they've done over 1,000 launches, and Gass says they have a history of reliability. SpaceX is just getting started.

As to why United Launch Alliance doesn't post prices on its website, Gass says the answer is simple. There is no one price. It depends on how far you're going: 200 miles or 22,000 miles.

Elon Musk argues that prices should be lower. One reason is the lack of competition in the launch business. After Lockheed and Boeing merged, they had a monopoly on the market:

If you read the press release announcing the merger, it reads like something out of an Orwell novel. They actually announced that the reason they were merging was to save the US government money. Now I did at the time ask for examples in history of a monopoly that was formed that subsequently resulted in prices going down and I did not receive an answer.

Michael Gass says the companies merged because there wasn't enough business to sustain both of them. But If Elon Musk and SpaceX think they have a better way of doing things, Gass says he welcomes the competition.

As for how cheap space flight should be, Gass agrees with Musk: $100 a pound to orbit could one day be possible.