Accessibility links
The Finance Overhaul Turns One : Planet Money President Obama signed the Dodd-Frank finance bill into law a year ago today. Here's an overview of who's saying what. 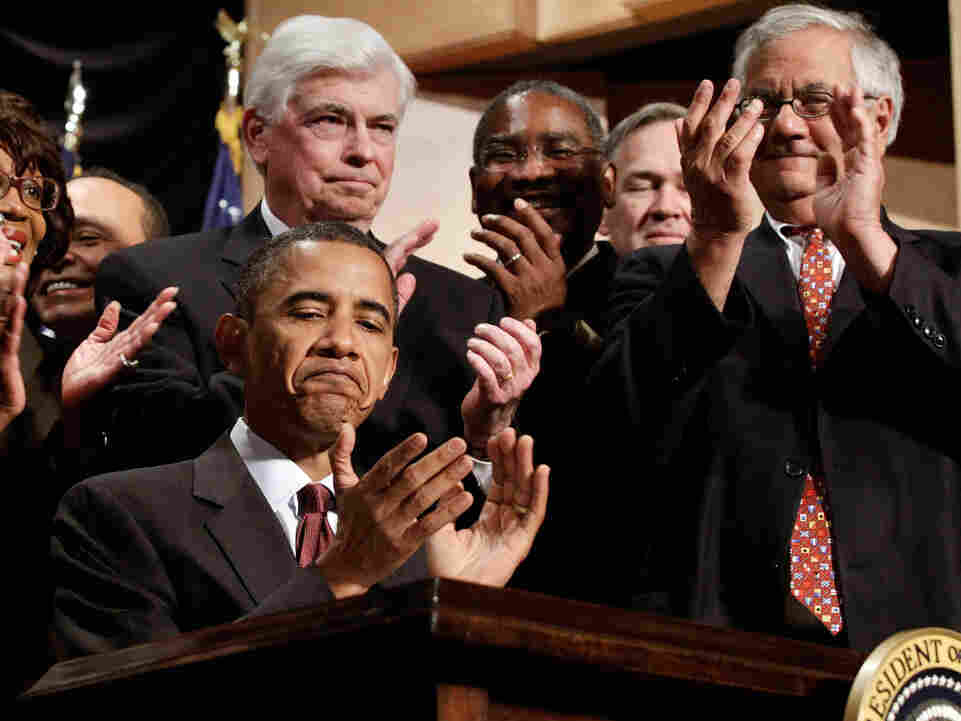 President Obama (with Dodd and Frank) after the bill into law. Chip Somodevilla/Getty Images hide caption

President Obama signed the Dodd-Frank finance bill into law a year ago today.

The Consumer Financial Protection Bureau, which was created by the bill, officially opens its doors today (without a director). The Office of Thrift Supervision, which was killed by the bill, becomes part of another regulator today.

The bill called on regulators to write hundreds of new rules for the financial system. As the Atlantic's Daniel Indiviglio writes in a useful overview, the vast majority of those rules have yet to be written. (And this graph, from the consulting firm Deloitte, illustrates the point.)

Still, in a WSJ op-ed, Tim Geithner rattles off a list of accomplishments — including reducing leverage in the financial system and giving regulators new tools to shut down big, failing financial companies.

Standard & Poor's writes that, despite claims by Geithner and others, the government would still bail out big financial institutions in a crisis. HuffPo's Shahien Nasiripour makes a similar argument in this post.

In a WSJ op-ed, the ranking Republican on the Senate banking committee, Richard Shelby, calls the CFPB "the most powerful yet unaccountable bureaucracy."

Ben Bernanke and a bunch of other senior regulators are appearing before the banking committee today in a hearing about Dodd-Frank. You can read their testimony here.