Accessibility links
Why Are Wedding Dresses So Expensive? : Planet Money A better question, according to one economist: Why are brides willing to pay so much? 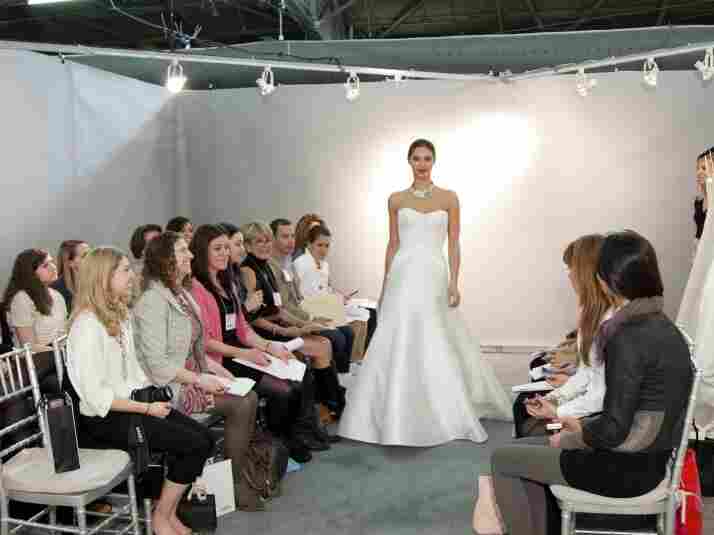 Shopping for a wedding dress is strange. You have to make an appointment. You're expected to bring family and friends. The salespeople say things like, "You'll remember this forever."

When I bought my dress a few months ago, I couldn't stop thinking about how emotional it all was — and how expensive.

To figure out why wedding dresses cost so much, I went to New York International Bridal Week, a big trade show for the wedding-dress industry.

That's where I met Anne Barge, who has been designing wedding dresses for over 20 years. She has her own line, and she also designs for the Badgley Mischka label.

She points me to a dress on one of her many racks. The dress was made with 25 yards of pure silk satin in it; that material costs $100 a yard, she says. The embroidery on top comes from India; it costs thousands more, Barge says.

A lot of that extra cost comes down to the word "wedding."

There's so much emotion tied to that word that's it's hard to put a number on it, but it's there. And Barge gets this. When she talks about her dresses, she is selling emotion.

"It's the dress of your life, and if there is ever one picture your [descendants] have of you it's the one in your wedding dress," she says.

That's a lot of pressure to put on a bride. Veronica Guerrieri was married last summer in her home country of Italy, and she says she felt it.

"They were trying hard to convince me that it was the best day of my life, that I shouldn't have thought about economics."

But not thinking about economics is hard for Guerrieri. She's an economist at the University of Chicago.

Guerrieri says we're part of the reason prices are so high: They're high because that is what we're willing to pay.

"I think that on average there is a lot of status and signaling going on wedding day," Guerrieri says.

A bride's dress can signal how wealthy she is, what her status in society is. But it can also signal how seriously she's taking this marriage.

Spending a lot on a wedding dress is a way for the bride to tell the world, "I'm only going to do this once, so I'm doing it big."