Accessibility links
Preschool: The Best Job-Training Program : Planet Money If you want adults to have jobs, the best time to train them is when they're 3 years old, an economist says.

Pregnancy And Childbirth: Business And Economics 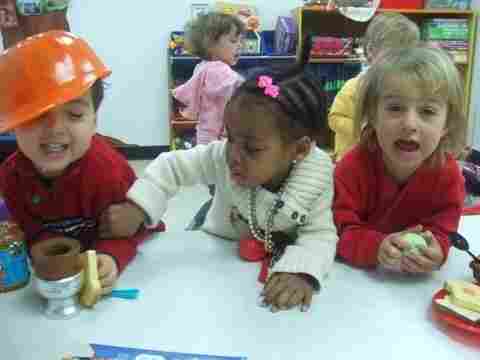 When economist James Heckman was studying the effects of job training programs on unskilled young workers, he found a mystery.

The problem was that the students in the training program couldn't learn what they were being taught. They lacked an important set of skills which would enable them to learn new things. Heckman, a Nobel-Prize-winning economist, calls these soft skills.

You might not think of soft skills as skills at all. They involve things like being able to pay attention and focus, being curious and open to new experiences, and being able to control your temper and not get frustrated.

All these soft skills are very important in getting a job. And Heckman discovered that you don't get them in high school, or in middle school, or even in elementary school. You get them in preschool.

And that, according to Heckman, makes preschool one of the most effective job-training programs out there.

As evidence, he points to the Perry Preschool Project, an experiment done in the early 1960s in Ypsilanti, Michigan. Researchers took a bunch of 3- and 4-year-old kids from poor families and randomly assigned them to one of two groups. The kids in one group just lived their regular lives. And the kids in the other group went to preschool for two hours a day, five days a week.

After preschool, both groups went into the same regular Ypsilanti public school system and grew up side by side into adulthood.

Yet when researchers followed up with the kids as adults, they found huge differences. At age 27, the boys who had – almost two decades earlier – gone to preschool were now half as likely to be arrested and earned 50 percent more in salary that those who didn't.

These results made me think: What is going on in preschool?

So I visited the Co-Op School, a preschool in Brooklyn. Eliza Cutler, a teacher there, said the kids do a lot of the same things the Perry Preschool kids did back in the 60s: They play, they paint, they build with blocks, and they nap.

If you didn't know where to look, you wouldn't see the job skills they're learning.

If they learn these skills now, they'll have them for the rest of their lives. But research shows that if they don't learn them now, it becomes harder and harder as they get older. By the time the time they're in a job training program in their twenties, it's often too late.

Heckman is an economist so he thinks about this as a cost-benefit analysis. To him, the message is clear: If you want 21 year-olds to have jobs, the best time to train them is in the first few years of life.

For more, see these studies:

A New Cost-Benefit and Rate of Return Analysis for the Perry Preschool Program: A Summary

The Productivity Argument for Investing in Young Children

Analyzing Social Experiments as Implemented: A Reexamination of the Evidence from the HighScope Perry Preschool Program