Accessibility links
The Smartphone Patent War, In 1 Graphic : Planet Money There's a legal war on in the smartphone industry. Everybody is suing everybody else for patent infringement. Here's what that looks like.

The Smartphone Patent War, In 1 Graphic

The Smartphone Patent War, In 1 Graphic

There's a legal war on in the smartphone industry. Everybody is suing everybody else for patent infringement. The patent war is a key reason Google is buying Motorola for $12.5 billion: Motorola has some 17,000 patents that will belong to Google when the deal goes through.

This graphic from Reuters shows how many lawsuits are flying back and forth. The key for Google is not Google itself, but rather all the hardware makers that build smartphones and tablets that run Android, Google's mobile operating system. Those companies are the ones with green dots next to their names. 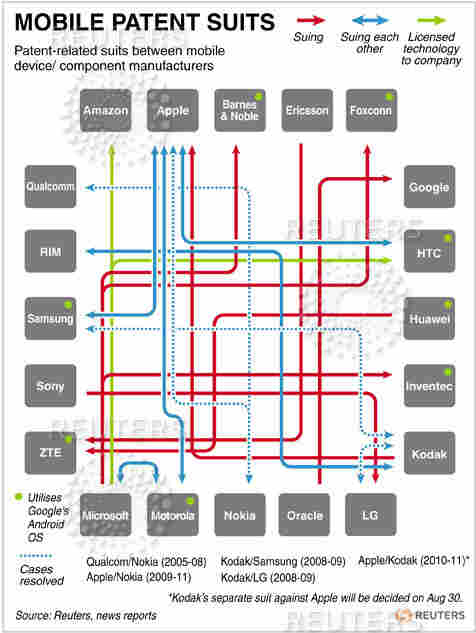 For more on why programmers don't like software patents, and why patents may be hindering innovation in the industry, see our story "When Patents Attack."