Accessibility links
A Big Bridge In The Wrong Place : Planet Money Why was New York state's Tappan Zee Bridge built at one of the widest spots on the Hudson River when it would have been much cheaper and easier to build it a few miles south? Newspaper clippings from the 1940s and '50s revealed something suspicious. 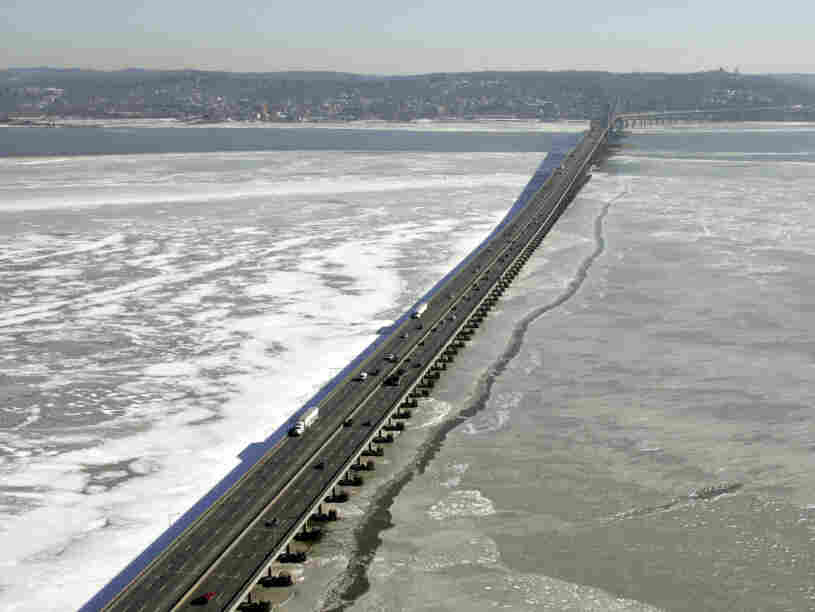 You would never look at a map of the Hudson River, point to the spot where the Tappan Zee Bridge is, and say, "Put the bridge here!"

The Tappan Zee crosses one of the widest points on the Hudson — the bridge is more than three miles long. And if you go just a few miles south, the river gets much narrower. As you might expect, it would have been cheaper and easier to build the bridge across the narrower spot on the river.

So I wanted to answer a simple question: Why did they build the Tappan Zee where they did, rather than building it a few miles south?

I started digging through newspaper clippings from the 1940s and 1950s. It turns out, the bridge was part of a much larger project: The New York State Thruway, one of the first modern highway systems.

The clippings also reveal something suspicious. There was an alternate proposal for a bridge at a narrower spot nearby. The proposal was put forward by top engineers at the Port Authority of New York and New Jersey.

But that proposal was killed by New York governor Thomas E. Dewey. The New York Thruway was his baby; in a 1954 speech he proclaimed that it would be "the world's greatest highway."

I called historians, and libraries and historical societies. No one seemed to know for sure why Governor Dewey did what he did. Then I found Jim Doig, a professor emeritus at Princeton.

Doig interviewed some of the key government officials involved in the project, and knew the answer.

The Port Authority — the body that proposed putting the bridge further south — had a monopoly over all bridges built in a 25-mile radius around the Statue of Liberty.

If the bridge had been built just a bit south of its current location — that is, if it had been built across a narrower stretch of the river — it would have been in the territory that belonged to the Port Authority.

As a result, the Port Authority — not the State of New York — would have gotten the revenue from tolls on the bridge. And Dewey needed that toll revenue to fund the rest of the Thruway.

So Dewey was stuck with a three-mile-long bridge.

Today, the Tappan Zee is in bad shape, and the State of New York is looking into fixing or replacing it. But none of the proposals would move the bridge to a narrower spot on the river. It's too late now: Highways and towns have grown up based on the bridge's current location.

We're stuck with a long bridge at one of the widest spots in the river. The repairs are expected to cost billions of dollars.