Accessibility links
Should You Bank On Bitcoin? : Planet Money Bitcoin is a lot like cash — for the online universe. It doesn't actually exist in the physical world. You can't hold bitcoins in your hand because they just live on computers and the Internet. Bitcoin is a virtual currency independent of any government. It's backed by the people who use it. 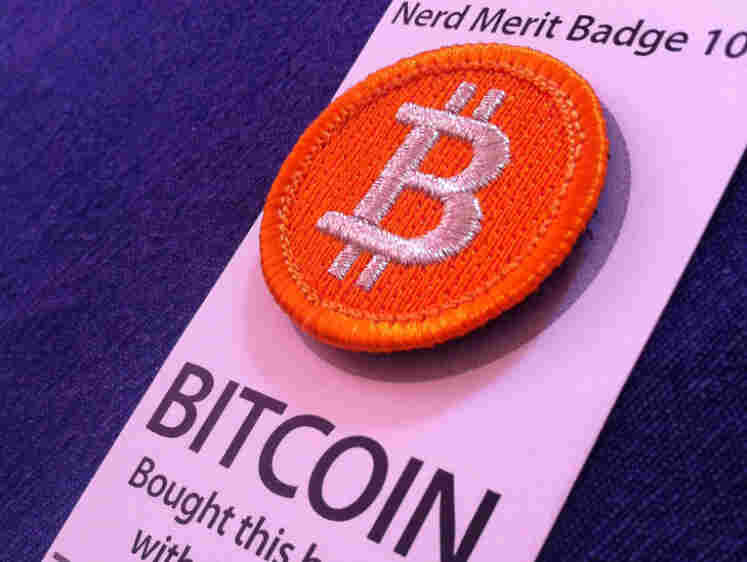 The U.S. has the dollar. Japan has the yen. Now some people are trying to invent a new currency that's not tied to any country or government. It's called bitcoin.

Bitcoin is a lot like cash — for the online universe. It doesn't actually exist in the physical world. You can't hold bitcoins in your hand; they exist only on computers.

There is no center to the whole bitcoin system. It's not like there's one computer somewhere storing all the information. It's a peer-to-peer system, run by the people who use it. For Gavin Andresen, a programmer who has done a lot of work on the bitcoin system, that's a big part of the appeal.

For me that's more comforting than thinking that politicians or central bankers won't screw it up. I actually trust the wisdom of the crowds more.

To truly understand bitcoin, you need to use it. We started by visiting an online exchange where you can trade actual dollars for the virtual currency.

When we started working on this story, $7 got you one bitcoin. But when we went to the exchange, something crazy had happened. The price had more than tripled — to $23.80.

Bitcoin had had a wild couple of weeks. After the website Gawker ran a story about an online market where you could use bitcoins to buy heroin, LSD and other illegal drugs, the exchange rate for bitcoins started rocketing up.

Then someone posted online that they'd had a half million dollars worth of bitcoins stolen.

A few days later, the main bitcoin exchange web site got hacked and had to shut down for a while. So we couldn't buy bitcoins there.

We were running out of time and needed some way to buy bitcoins. We called up Gavin again, and he told us, the best way to buy bitcoins quickly, would be very low tech. We would have to meet someone who has them and exchange our cash for their bitcoins. Gavin gave us the name of a guy, Bruce Wagner, who hosts an online 'TV' show about bitcoin.

We meet Bruce at his office. He has us go to a website, MyBitcoin, to set up a digital wallet. We choose a username and password, and we give Bruce $40 in cash. He looks up the exchange rate, $17 per bitcoin, and gives us 2.352941176 bitcoins.

We finally have bitcoins, but before we use them, we had one last question — are they legal?

Ronald Mann, teaches at Columbia law school. He says bitcoins are legal, for now. But if it turns out they're used mostly for illegal stuff, the government could shut the currency down.

The bigger challenge, Mann told us, is getting enough people to use the currency. "I see its future as a real currency as very limited." In five or ten years, Mann said, "I think it won't exist."

For now, they do exist. So we decide to use our bitcoins to buy lunch at one of the few places that will accept bitcoins, a restaurant in Manhattan, Meze Grill. We order some smoothies, a falafel platter, and a chicken platter.

At the cash register, it takes a few minutes to log in from an iPhone and send the bitcoins to the restaurant, but eventually it works, we get our food and sit down for lunch.

Note: After we bought lunch, MyBitcoin — the online bank we used — was robbed and had to shut down. Here's Bruce Wagner's reaction.