Accessibility links
When Unemployed Becomes 'Effectively Unemployable' : Planet Money Long-term unemployment is worse than it's been at any time since before World War II. That's very bad news not just for the unemployed, but for the long-term health of the U.S. economy.

From Unemployed To Unemployable

From Unemployed To Unemployable 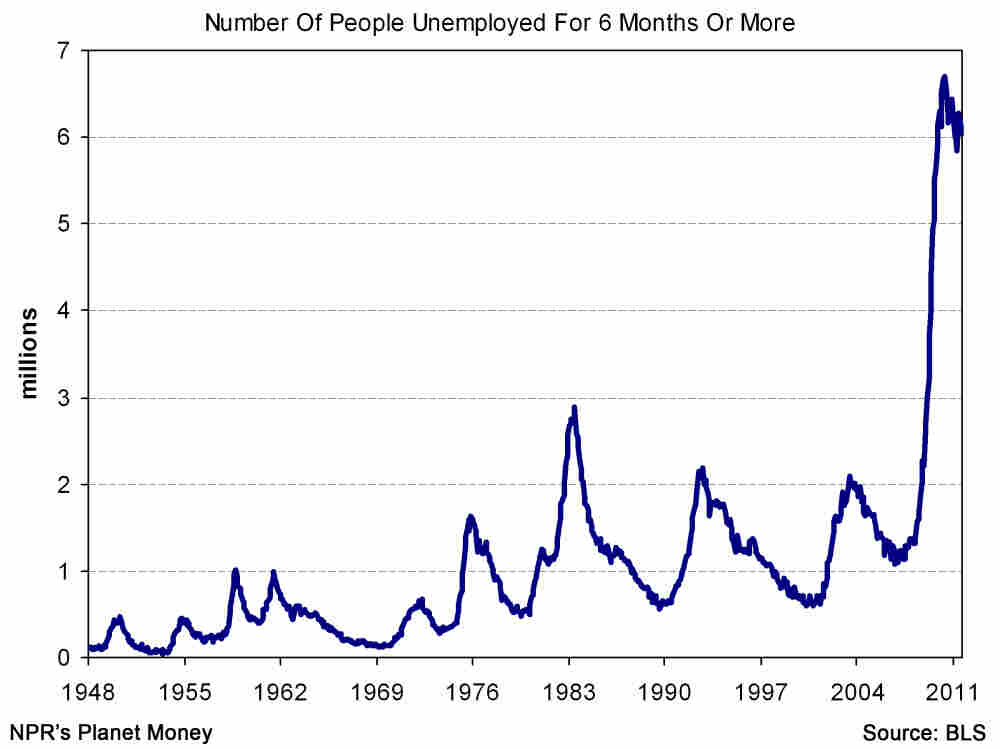 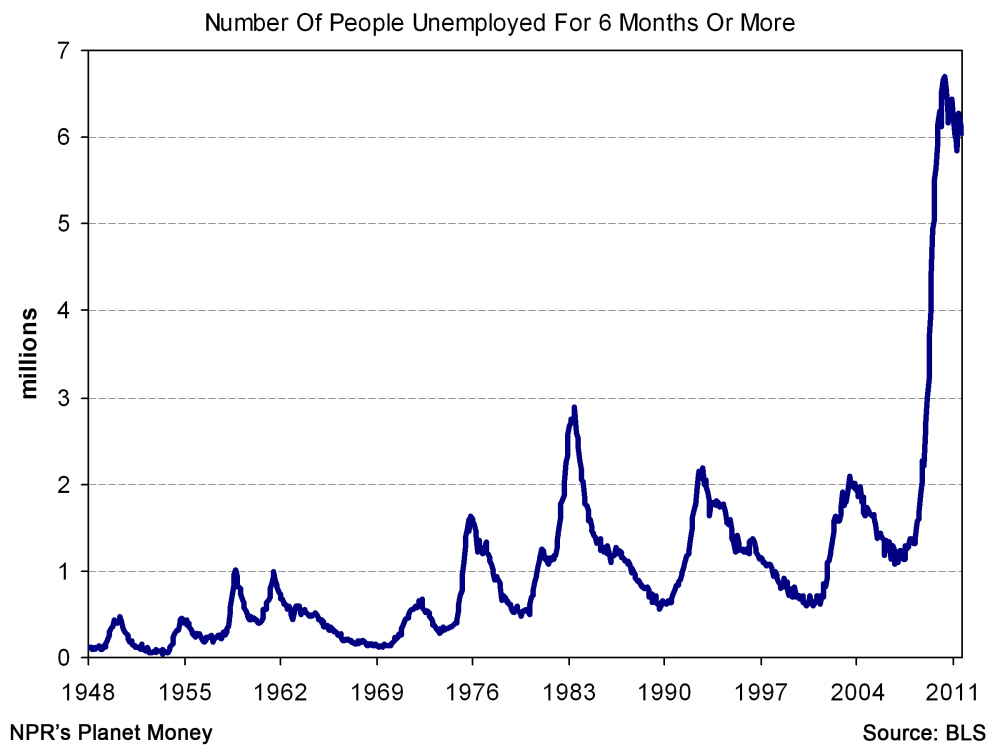 The unemployment rate didn't budge in August, according to this morning's jobs report. Net job growth was zero.

Also basically unchanged: The number of people who have been out of work and looking for a job for six months or more.

That's very bad news not just for the unemployed, but for the long-term health of the U.S. economy. 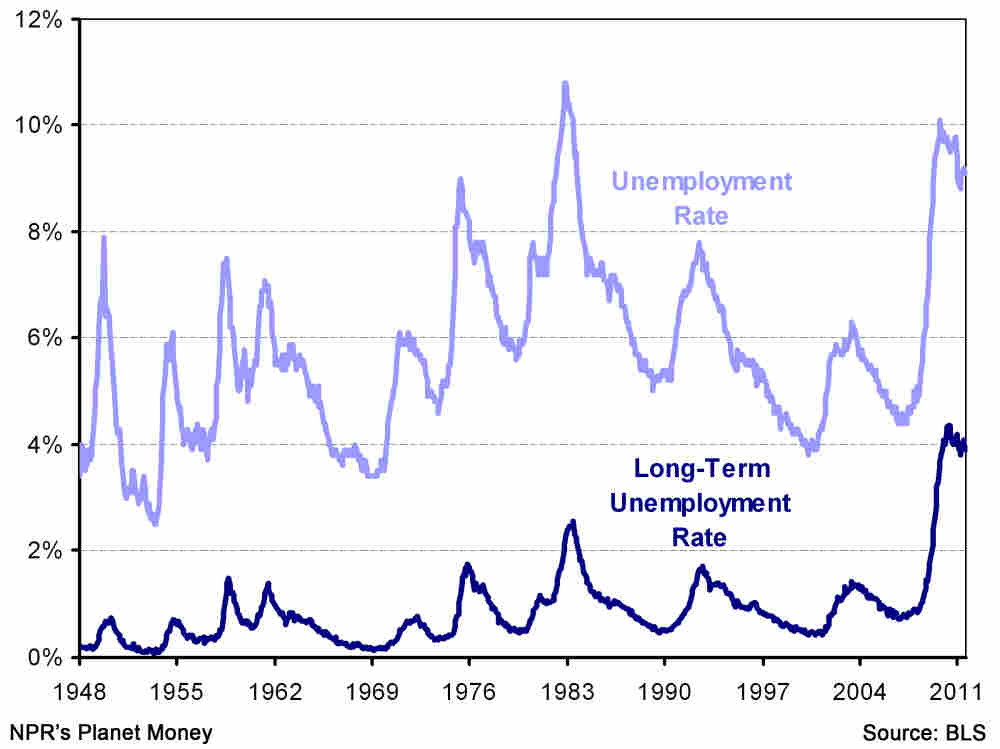 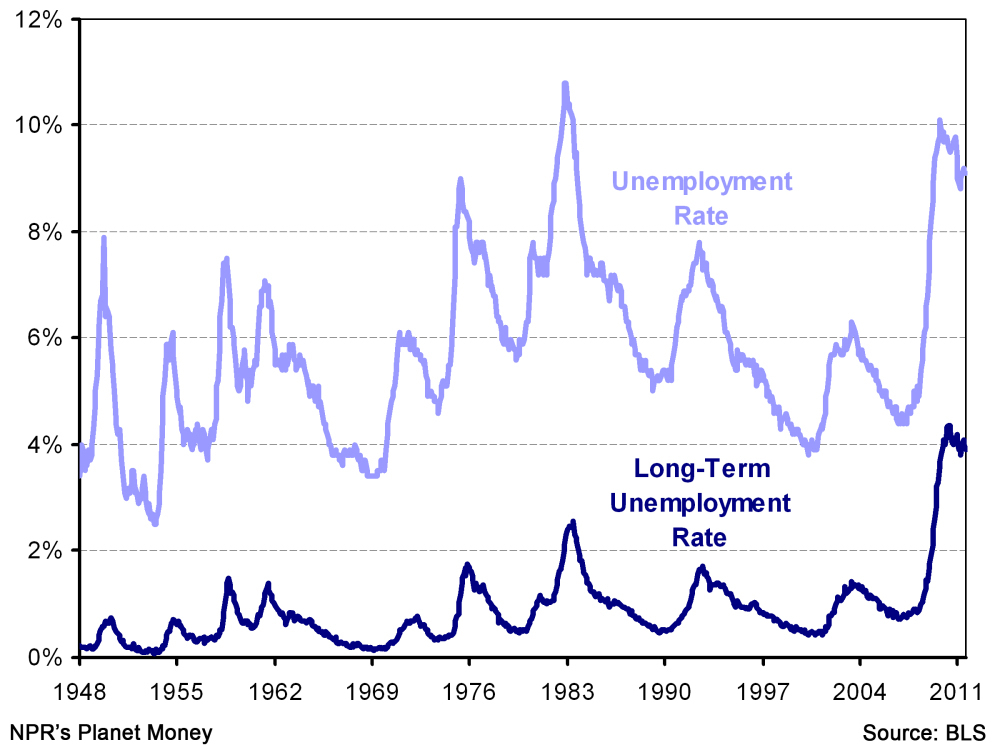 The longer people are unemployed, the less likely they are to find a new job.

This is partly due to the fact that the most employable people — those whose skills are in highest demand — get snapped up right away.

But there are also more insidious forces at work. As Ben Bernanke recently pointed out, the skills of unemployed workers erode, making it harder for them to find a new job. Employers may be wary of hiring someone who has been out of work for a long time. And after months of searching, the unemployed tend to spend less time looking for work.

"After a long period of unemployment, affected workers may become effectively unemployable," economists at the Richmond Fed wrote in a paper published this week.

Over most of the past century, this wasn't much of a problem for the U.S. The typical pattern was for lots of workers to lose jobs during recessions, but to find work after just a few months of unemployment.

That has changed dramatically in the past few years. "Never before in the postwar period have the unemployed been unemployed for so long," the Richmond Fed paper says.

One final, somewhat technical note: The extension of unemployment benefits — which typically expire after six months, but now can run for nearly two years — has probably played some role in driving up the long-term unemployment rate.

But several studies have found that this accounts for only a small part of the overall rise in long-term unemployment. (See this paper from the San Francisco Fed for more on the subject.)

For the most part, "people are simply flowing into unemployment and not finding jobs," Bart Hobijn, an economist at the San Francisco Fed, told me. "That's the overall weakness in the economy."