Accessibility links
Switzerland: Too Strong For Its Own Good : Planet Money The world economy is so messed up right now that even healthy countries are facing a strange kind of crisis: They've become too popular with investors. 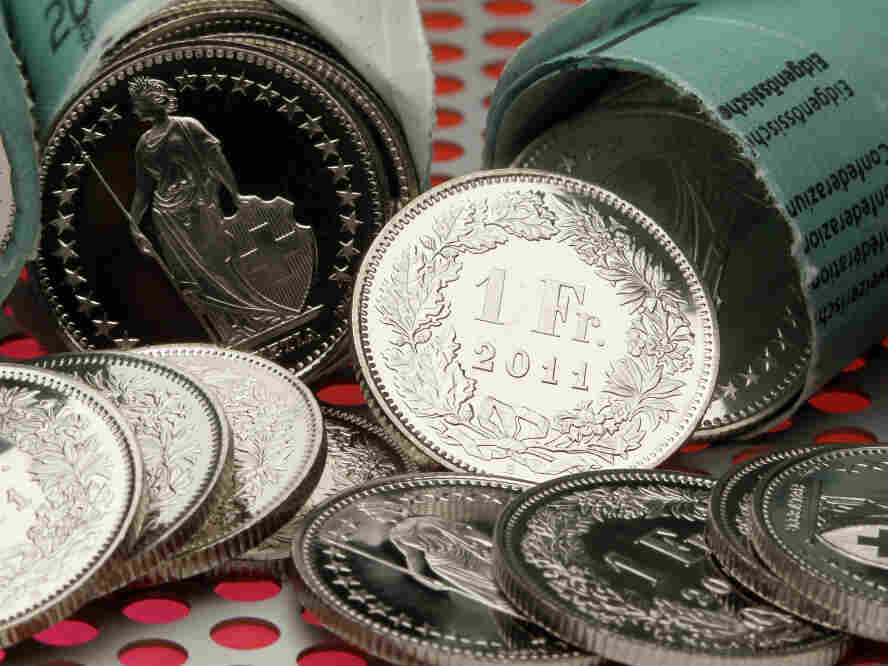 The world economy is so messed up right now that even healthy countries are facing a strange kind of crisis: They've become too popular with investors.

Take Switzerland. Its economy is in great shape. Low debt, low unemployment. And, perhaps most importantly, the country doesn't use the euro.

So it's not surprising that the Swiss Franc has become a popular safe haven among investors who are worried about the future of the euro and the U.S. dollar.

"In a way, the Swiss are victims of their impeccable management of their economy," says Charles Wyplosz, of the Graduate Institute of International Studies in Geneva.

It's great to be loved. But so many are buying Swiss francs that the value of the currency has skyrocketed. The value of the franc has risen by 30 percent compared to the dollar, and 16 percent against the euro over the last year.

Here's why that's a problem.

If a foreigner wants to buy something made in Switzerland — a watch, say — it's going to be much more expensive than it was a year ago. That's what happens when the value of the franc rises against other currencies.

For exporters in Switzerland, this is devastating.

You can see the impact already in the bottom line. SWATCH says its profits are down 12 percent because the Swiss franc is so strong right now.

There is an upside to having such a strong currency: Imports become cheaper. And, as the Wall Street Journal reported recently, Swiss supermarkets have been cutting prices lately on imported goods.

But Switzerland's economy is heavily dependent on exports. So the Swiss are trying to fight the run up in the franc's value by cutting interest rates, which should make Switzerland a less attractive place for foreign investors to park their money.

So far, though, they've had limited success. Investors, it turns out, are really desperate to buy Swiss francs.

"There is a huge storm in the world," Wyplosz says. "How high can they build dikes to prevent waters from flowing in?"

Wyplosz says only two things can solve this imbalance: Either the world economy gets better, or the Swiss economy gets worse.

And with exports hurting, the Swiss miracle is already slowing down. In other words, investors might be destroying the very thing they loved about Switzerland in the first place.