Accessibility links
The Economic Catastrophe That Germany Can't Forget : Planet Money To understand why Germany is so freaked out by what Europe's central bank is doing, you need to go back nearly a century. 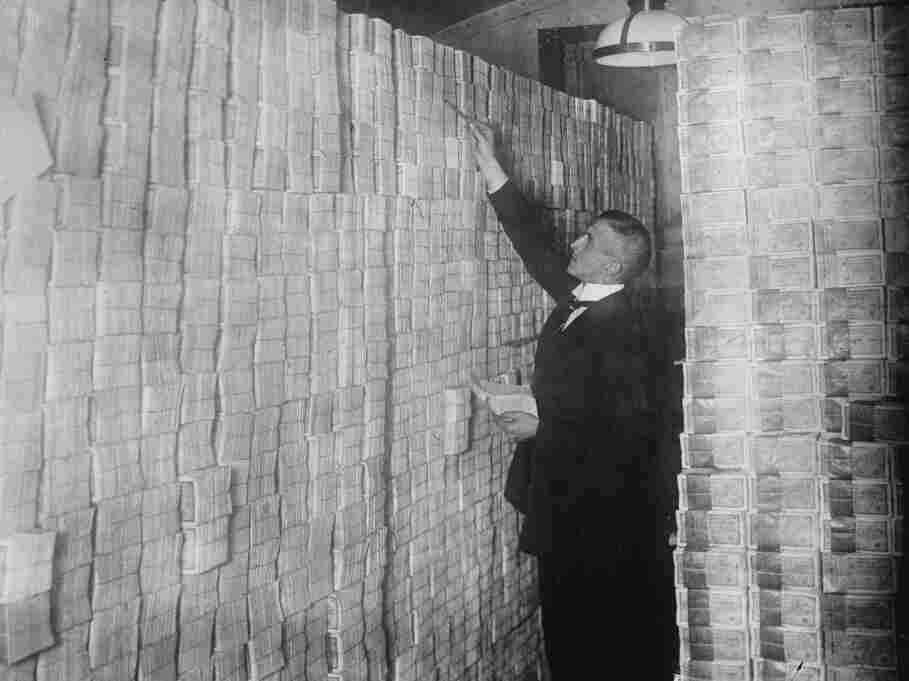 Paper money is stacked in a Berlin Bank in 1922. BuyEnlarge/ZUMAPRESS.com hide caption

For troubled European countries, the European Central Bank could be like a giant ATM.

After all, the ECB has the unique ability to print unlimited amounts of euros. It could lend that money to the governments in need.

The problem with this idea? Europe's biggest economy hates it.

Cue inflation-fearing, deep-pocketed Germany. The thought of hitting up a central bank's ATM would send many Germans fleeing in panic.

To understand why Germany is so freaked out about a central bank lending money to troubled governments, you need to go back nearly 100 years — to when the German central bank did just that.

After World War I, Germany was deep in debt. Soldiers back from the war needed money for pensions. War widows needed compensation. Reparations to France and Britain were enormous. And no other country would lend it money.

So Germany's central bank printed a bunch of money and loaned it to the government. The result was possibly the most destructive case of inflation in history.

During the Weimar inflation, people carted money around in wheelbarrows to do their shopping. At one point, it cost a million marks to mail a letter. The currency was so worthless, it was used as wallpaper in German bathrooms. Money started losing value by the second:

"There's this famous example that somebody sits in a pub and orders a beer," says historian Carl Ludvig-Holtfrerich. "Immediately, when the waiter carries the beer to his table, he orders the second one. The waiter says, 'Well, you haven't finished!' And he says, 'Yes, but if I don't order now, prices will be double by the time I finish my first beer!' "

This is Weimar humor. But the result of the hyperinflation was an economic catastrophe.

Many Germans believe it helped lay the groundwork for the rise of the Nazi party — a belief that has left the nation with a profound fear of inflatoin.

"This historical experience tells every policy maker: You don't mess around with inflation," says Klaus Frankenberger, an editor in Frankfurt. "Never. You don't do this."

Fast forward 70 years from Germany's inflation nightmare to 1992. European countries are setting up the euro, and the new currency needs a new central bank.

In 1992, Germany was the biggest economy in Europe, and it had a lot of influence over the shape of the new European Central Bank.

So it's no surprise that the ECB wound with its headquarters in Frankfurt, and with a single mission: Keep inflation in check.

The ECB is not supposed to be bailing out governments, according to many Germans. It's not supposed buy the bonds of troubled countries.

But for more than a year now — ever since Greece first put up its hand and said, "We need help" — that's exactly what the ECB been doing.

But Germans are not impressed.

Just last week, Jurgen Stark, the top ranking German at the ECB, resigned. The official line is that he resigned for personal reasons. But it's no secret that he hated the bond buying program.

When Stark resigned, the markets freaked out. His resignation — and the market reaction — was a reminder that there's still deep opposition in Germany to the ECB's tactics in fighting the debt crisis. And in the long run, the ECB needs Germany's support.