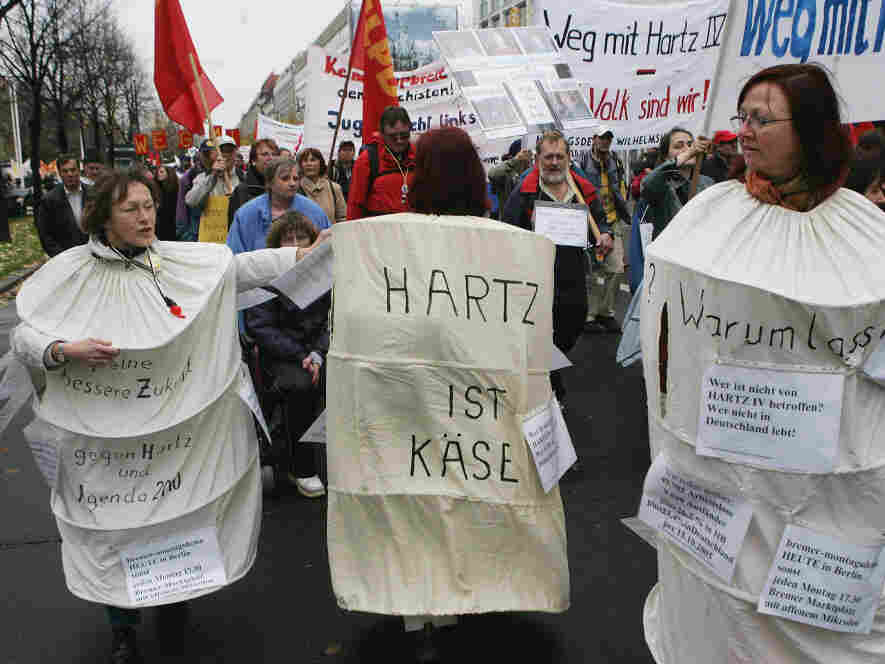 The story of how Germany got here goes back nearly a decade.

In 2002, Germany looked a lot like the United States does today: it had no economic growth, and its unemployment rate was 8.7 percent and climbing.

Gerhard Schroeder, the German chancellor at the time, made an emergency call to a trusted friend.

"I was actually surprised when I got the call," says Dr. Peter Hartz, who had gained a high profile as human resources director at Volkswagen.

In 2002, Hartz convinced unions to make concessions to save jobs. Schroeder knew of Hartz's work because they'd served on Volkswagen's board together.

Schroeder wanted Hartz to apply his formula to the whole country, so the chancellor created a commission and put his friend in charge.

Hartz's first step was to challenge Germans' standard notion of what a job was.

He wanted them to rely less on long-term, full-time positions with lots of worker protection, and get them into flexible temporary jobs.

"We saw that companies would indeed hire if they were able to take on additional people for temporary jobs and smaller jobs," Hartz recalls.

He and his commission named this new breed of work a "minijob."

Thomas Huch owns a factory that produces steel tanks in Nuerrepin, a town about an hour outside of Berlin. The shop floor is a combination of high- and low-tech; sparks fly from welders while across the room men tap away at computers.

Huch is a fan of the minijob.

"It's not possible to give everybody full-time jobs," he says. Minijobs let him bring in workers when he has a backlog or when there's a rush in business. Before the Hartz commission, Huch explains, he lacked the ability to let workers go when he no longer needed the help — so he couldn't hire when he had a temporary surge in business. Minjobs let him do that.

But a minijob isn't such a great deal for workers. They can work as many hours as the employer wants, but their wages max out at 400 Euros per month, or about $550.

Workers get to keep all the money — they don't pay any taxes on their earnings. And they're still eligible for some government assistance.The minijob can also lead to a regular, full-time job.

The number of people working in minijobs and other temporary employment has skyrocketed since 2005, when Hartz's reforms became law. After an initial spike to 10 percent, Germany's unemployment rate dropped, settling in at today's 6.2 percent.

But Peter Hartz remains unpopular in Germany, largely due to his second big idea for fixing Germany's job market: He wanted to make life harder for the unemployed.

Under what came to be known as the Hartz Reforms, a German who's out of work for more than a year gets 364 euros a month (about $500). They also get subsidized rent and heat, and a job counselor.

Before the Hartz commission, they'd get paid roughly 50 percent of their previous income for as long as they were unemployed.

In Nuremberg, I met Monica Cariben, who is about to lose her job at an insurance agency. Like a lot of people, she prefers the old unemployment system.

"I am upset that there are recipients who have been drawing this benefit for twenty years and they have a good life," Cariben says. "And somebody like me who comes in now, we get such little money--that is not worthy of a human being."

Under the new Hartz rules Cariben must register for unemployment before her current job ends. If she doesn't, the government can punish her by delaying benefits.

It sounds rough, but that's the point. Hartz wanted to make unemployment uncomfortable so that people would get back to work.

"What is most important is to make sure that any unemployed person gets a job as fast as possible," Hartz says.

Hartz's legacy is controversial both because of the reforms and some shady dealings. He was convicted of paying off union leaders back at Volkswagon to go along with his 2002 cutbacks.

Still, the changes he pushed through have clearly contributed to the huge drop in the country's unemployment rate.

What lessons can the US draw from Germany?

Unfortunately, not many. A lot of the regulations and benefits that the Hartz Commission curtailed simply don't exist here.

We already have lots of low-paying temporary jobs, and our unemployment benefits are nowhere near as generous as Germany's once were. The Hartz Reforms basically made Germany's labor market look more like the labor market in the U.S.