Accessibility links
Why Amazon Loses Money On Every Kindle Fire : Planet Money The Kindle Fire is a book store, a movie theater and a record shop. And Amazon's the one selling the books, movies and music. 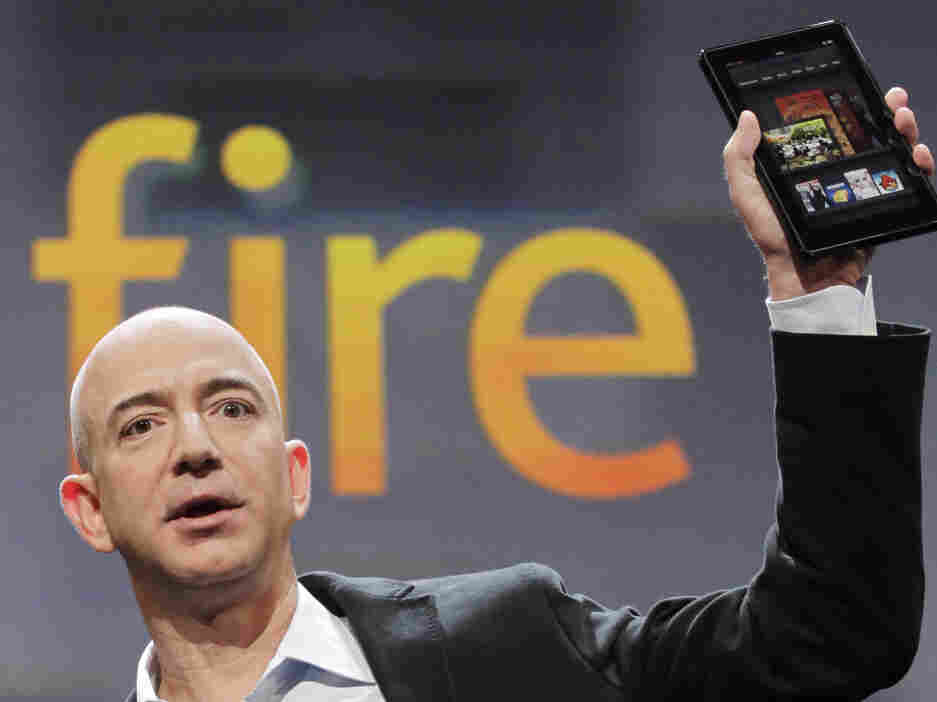 If you wanted a tablet but thought the price of an iPad was too steep, Amazon has a message for you. You can't afford NOT to buy yourself a Kindle Fire.

The new tablet sells for $199 — less than half the price of an iPad.

Amazon can sell for such a low price partly because it's willing to sell each Kindle Fire for less than it costs to produce.

Amazon hasn't said exactly how much it costs the company to make each Fire. But Andrew Rassweiler of the research firm IHS iSuppli has a pretty good idea. He added up the price of the components in the tablet and came up with a cost of $209.63 for materials and manufacturing per tablet.

And Rassweiler's estimate doesn't include the licensing deals Amazon cuts to stream content, or the marketing to promote the Fire.

Why does Amazon sell a product at a loss? Because, for Amazon, the Fire is a book store, and a movie theater, and a record shop. And (of course) Amazon is the one selling books, movies and records.

This is the model printer manufacturers often use. You can buy a decent printer for $40 — less than it costs to produce. That's because printer companies make all their money selling ink cartridges to go in the printers.

The ink in those tiny cartridges goes for a ridiculous $4,731 per gallon, according to Eduardo Porter, the author of a book called The Price of Everything.

Unlike, say, Apple, Amazon didn't start out as a computer company. For Amazon, the computer is simply a means to an end.

"Amazon was a store that just happened to be online," Porter says.

And though Amazon sells basically everything now, it's the company's identity as a bookseller that drove it to make tablets, according to Porter. They realized that more and more reading was going to happen on this devices, and if they wanted to stay in the book business, they had to move onto this new platform.

Amazon is acting like bars in the mid-nineteenth century United States that offered a free lunch — if you paid for drinks. "There was a lot of salt in the meal," Porter says.

The Kindle Fire's not free, but it's certainly cheap. And if having a Fire makes people thirsty for more Amazon products, then the low price pays off for Amazon.