Accessibility links
The Trouble With Black Friday : Planet Money In the recent recession, solid Black Fridays have been followed by lousy sales once the special offers went away. 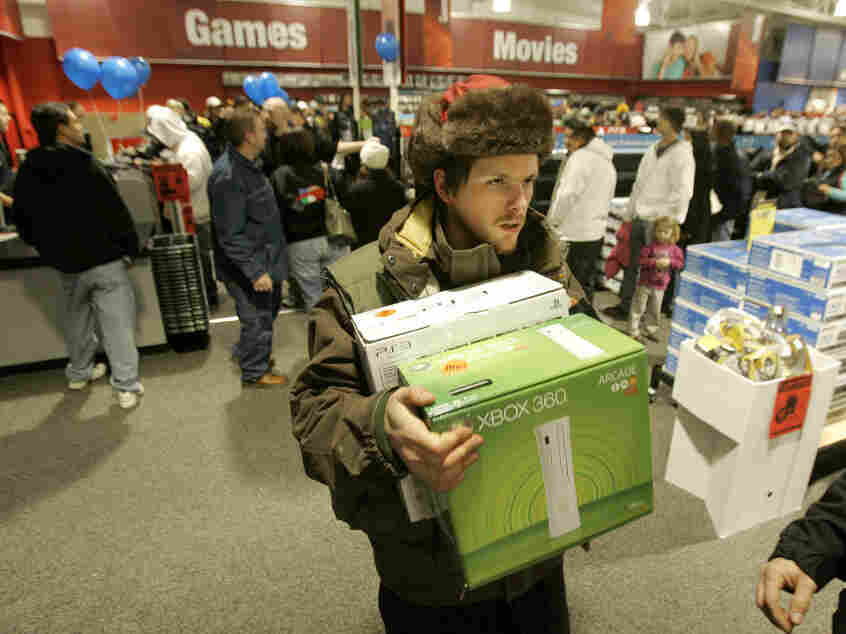 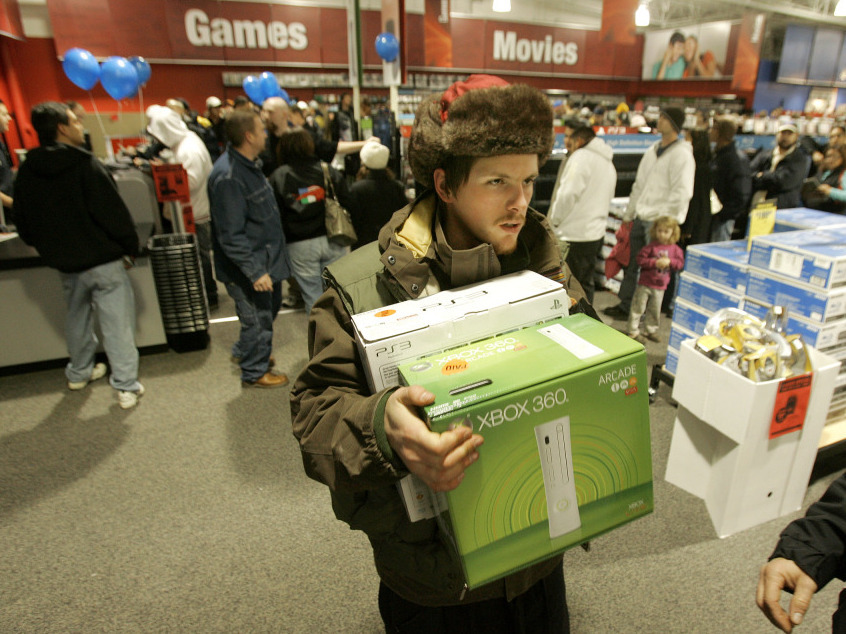 If an alien with an accounting degree touched down in America, it might conclude that we're a weird cult that spends 11 months living frugally and four crazy weeks buying tons of stuff we don't need. It wouldn't be entirely wrong, either. Retailers make around a fifth of their sales during the holiday season — close to half a trillion dollars — when the ratio of frivolous to necessary purchases spikes. It's not unusual for large chains to operate in the red from New Years' Day through Thanksgiving and then make it all up in those crazy weeks.

Black Friday, the day after Thanksgiving, is the single most manic, delirious shopping day of the year and, of course, the official beginning of the holiday-buying frenzy. Holiday binge-buying has deep roots in American culture: department stores have been associating turkey gluttony with its spending equivalent since they began sponsoring Thanksgiving Day parades in the early 20th century. And to goose the numbers, they've always offered huge promotions too.

Black Friday relies on a few simple retail strategies that, with tons of customer data and forecasting software, have become fairly precise. One method is to sell everything as cheaply as possible and magnify a tiny profit through volume. Other stores mark down only a few high-profile items — even selling them at a loss — in hopes that customers will also throw a few full-priced items in their carts. Regardless, Black Friday is essentially a one-day economic-­stimulus plan and job-creation program. Retailers use TV commercials and deep discounts, rather than tax breaks and infrastructure spending, but the effect is the same: billions of dollars, which would otherwise never be spent, make their way into circulation.

In some years past, big sales on Black Friday have meant a good year for the retail sector, which makes up about a fifth of the U.S. economy. (This year, retailers are predicting a so-so year, with just tiny growth in sales.) But lately, the data have been much harder to read. On a spread sheet, broke people buying on deep discount look an awful lot like people who feel flush, but they're not the same thing. In the recent recession, solid Black Fridays have been followed by lousy sales once the special offers went away. It's another indication of how hard it is to understand the real state of our economy and what we can do to make things better.

One attractive approach to the latter would appear to be effectively having a few months of extended Black Friday discounts. In theory, it's a way to end an economic downturn: when the economy slows, consumers stop spending. Then businesses slash prices, people buy at discounted rates, warehouses empty and business picks up. But this cycle was a lot easier to maintain before, roughly, 2001, when the United States so dominated the global markets that it also determined the cost of raw materials. When U.S. sales fell, global commodity prices followed. As a result, American companies could lower prices on consumer goods without firing a lot of workers or cutting their pay. But not any more: demand from China, India and Brazil, among others, is now sending the prices of oil, grains, metals and other commodities higher than ever. U.S. companies — stuck with a higher bill — have cut costs by laying off workers rather than by slashing prices. This holiday season, for example, retailers have the smallest number of workers per sales dollar in the last decade.

While Black Friday can be an amazing stimulus for one day, it can be destructive if it goes on too long. The main problem with an extended period of price discounts is that if companies end up with lower profits from smaller margins, they may need to fire even more people, thus raising unemployment even further and making shoppers even less likely to spend. If they go on too long, deep discounts could also lead to one of the scariest phrases in economics, "a deflationary spiral," in which consumers and businesses are in a miserable stalemate — not spending, not hiring. When everybody expects prices to keep falling significantly, things get worse. Why shop today if everything will be cheaper tomorrow? Why build a new factory and hire workers if profits are just going to fall?

There is, however, a way to achieve a healthier, extended Black Friday. It also results in consumers shopping and businesses hiring, but, paradoxically, it's achieved through raising prices rather than cutting them. And it is truly one of the other scariest words in economics: inflation. Like a defibrillator, inflation is a blunt tool that, used exceedingly sparingly, can sometimes save the patient. The Federal Reserve can create inflation by pushing more dollars into the economy, a huge influx of which makes every dollar we have worth a bit less.

Most of the time, the rate of inflation is so low that we barely notice it. When it's out of control, as it is right now in Zimbabwe, it makes money effectively worth nothing. But a bit of extra inflation can work miracles. With, say, 5 percent inflation — a bit more than double the current rate — $100 today will only buy $95 worth of stuff next year. That's frightening, which is the point. We actually want consumers to realize that prices are rising and that money in their bank accounts is losing value if they don't start spending. The same goes for companies too, which will be compelled to build and hire rather than sit on earnings, as many are now.

These days, the inflation solution is a hot topic among policy experts and economists, both liberal and conservative. Some Democrats think of it as a sort of back-door stimulus — because Congress won't pass President Obama's jobs plan. For a few Republicans, it's a way to prod the economy without increasing government spending or debt. And then there are other economists who point out the rather obvious downsides: inflation, once it starts, can get out of control. Rising prices without new hiring would make people worse off. Weimar Germany's hyperinflation led to Hitler; some blame inflation in the United States in the '70s for giving us disco.

Even without these memories, inflation is a tough sell. It's nearly impossible for politicians to tell Americans that their financial problems will be solved once the money in their wallets is worth less. (This, after all, is why Rick Perry threatened violence on Ben Bernanke.) Yet the biggest advantage, and somewhat terrifying disadvantage, to inflation as a policy tool is that it can be instituted without any politicians' involvement. The Federal Reserve Board can meet and make some decisions, and pretty soon we'll all see prices start rising.

In our bizarro economic world, where inflation can be good and discounts can be bad, the best long-term hope for the future might be the thing that most terrifies us. If emerging-market nations in Asia and Latin America develop a strong middle-class majority — as of now, they still haven't — the United States will have less power and influence. But it also means that if our economy slows down again (and one day it will), American companies will be able to rely on consumers in Brazil and China without having to spur shoppers with extra inflation or deep discounts. There shouldn't be anything scary about that.