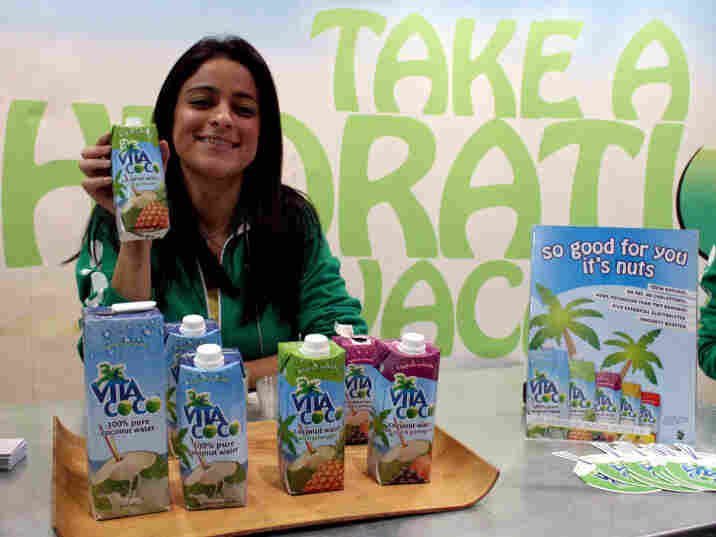 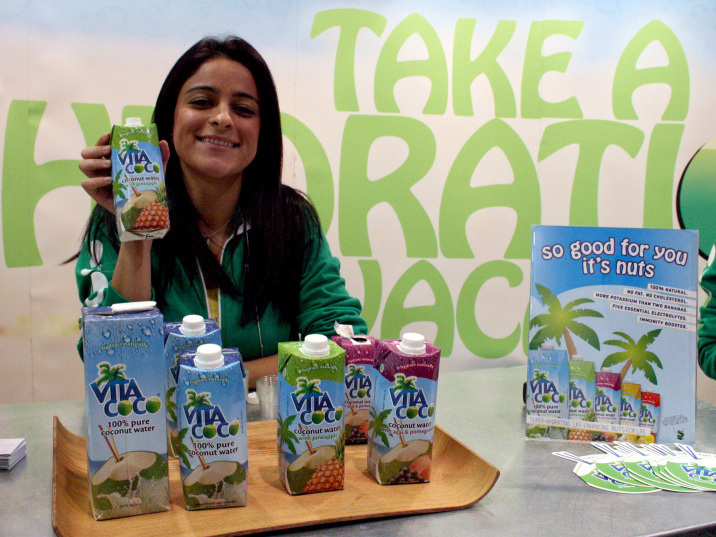 A couple of years ago if you wanted to drink coconut water, you had to buy your own coconut, bring it to your kitchen, and start whacking away with a knife.

Today, you can find packaged coconut water in a convenience store, Wal-Mart or your friendly neighborhood yoga studio.

"I think it was a great year for coconut water, " says Alejandra Simon, an assistant manager at the Laughing Lotus yoga studio in New York City. "I can't walk down the street without seeing someone with coconut water in their hands."

If you want to know how coconut water pulled off a marketing miracle this year, you have to come to a place like like Laughing Lotus. This yoga studio does not sell sports drinks. They only have coconut water

It's more expensive than Gatorade, but it's pure — it's straight from the coconut to the package. And Simon says it does seem to hydrate her customers after a yoga session.

"If people see me carrying around this coconut water with my yoga mat this will show that I like yoga and I'm really conscious and enlightened," says Simon.

Okay, I know it might be easy to laugh at this and call it another health food fad. But beverage consultant Tom Pirko says in 2011 projecting this vibe worked for coconut water.

"Some of the brands are up 400 percent in one year," says Pirko. "Its a phenomenon."

It's not about the taste. For people who see soda as a sugary poison and fruit juices as loaded with calories, coconuts evoke glowing healthy people, according to Pirko.

"The only thing that really counts is image," he says.

The business is still tiny compared to soda. But industry leader Vita Coco will do close to $100 million dollars in sales this year.

Pretty good for a beverage that Mike Kirban started to import in 2004. Kirban hustled Vita Coco to stores in his Brooklyn neighborhood.

He says at first the stores didn't know what he was talking about ("Coconut what?"). But eventually the stores came around, and so did the yoga studios. Then celebrities started drinking it.

The big beverage companies eventually joined in. Coca-Cola invested in Zico coconut water. Pepsi has stakes in two brands. Kirban is okay with that.

"Five shelves of coconut water, four different brands in there, all different flavors," he says. "It really helps build a category rather than a brand."

Part of a year-end series titled, It Was A Good Year For...