Accessibility links
Jack Abramoff Explains The 'Lobbyist Safecracker Method' : Planet Money What do you do if you're a lobbyist and you need to get in the door to talk to a hostile senator? Start rounding up checks. 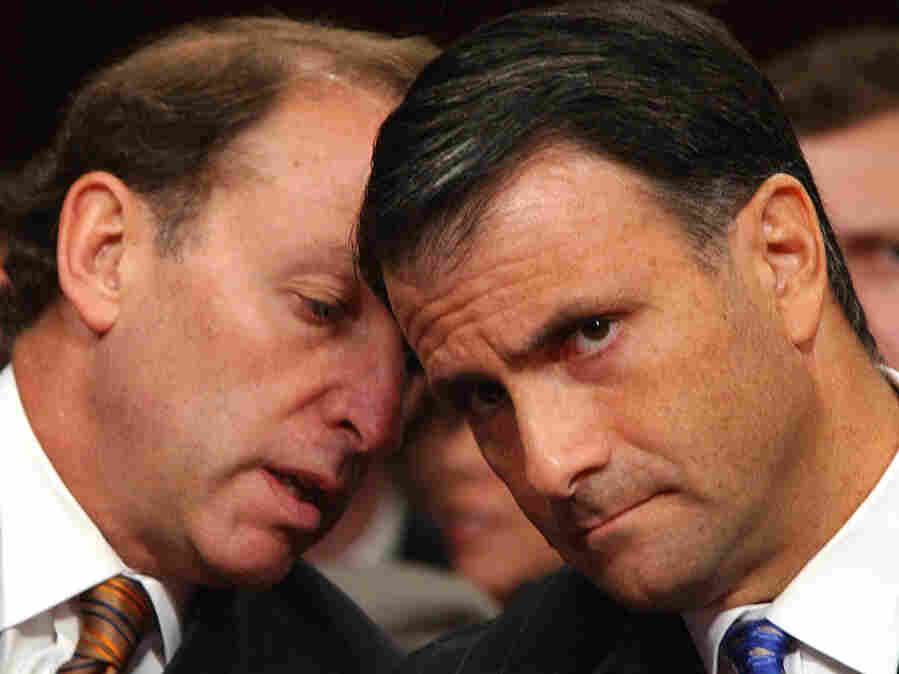 Jack Abramoff in 2004. He's the one on the right. Dennis Cook/AP hide caption

Disgraced lobbyist Jack Abramoff has been making the rounds lately. He's out of prison. He has a new book. He's in a talkative mood. So I figured it was a good time to ask him about the business of lobbying — not about what he did that was illegal, but about the ordinary, legal stuff.

The firm he worked for was called Greenberg Traurig. I chose a year at random when Abramoff was working there, and picked a client I hoped would be fairly typical. I chose Tyco International, a multinational corporation that in 2003 gave Abramoff's firm $1.3 million.

"They were fighting to stay out of the tax bill that year, which would have retroactively taxed them to the tune of about $4 billion," Abramoff says.

At the time, Sen. Charles Grassley, a Republican from Iowa, had introduced a bill with a provision that targeted companies like Tyco, which maintained an off-shore tax status. The provision would have imposed new taxes on Tyco going back to 1997.

So Abramoff and his team targeted the sponsor, Grassley.

"What we did was we plied him with contributions," Abramoff says.

Abramoff got everyone he could to make donations to Grassley's re-election campaign. Abramoff himself made contributions, as did other people at his firm, as well as executives and employees at Tyco.

But there are limits to how much each individual can give, so Abramoff had to expand the circle of people willing to donate. He went to his other corporate clients and asked them for donations as well.

"I went to every client I could and rounded up every check we could for him," Abramoff says. He continues:

Access is vital in lobbying. If you can't get in your door, you can't make your case. Here we had a hostile senator, whose staff was hostile. And we had to get in. So that's the lobbyist safecracker method, is raise money and become a big donor.

Abramoff forwarded me some emails that were written around this time. They suggest the safecracking allowed his firm to get in the door.

One email to Abramoff from one of his head lobbyists starts, "I ran this morning with Senator Grassley and had breakfast with two staffers and his wife at his house ... looks like I'll be doing it every Wednesday morning."

In another email, the woman in charge of raising money for Grassley's re-election writes to Abramoff's lobbyist to ask about an event Abramoff's firm is holding to raise money for Grassley. She asks, "What do you think would be a realistic number?" Translation: How much money will the fundraiser generate? Answer: $30,000.

It's hard to figure out exactly how much Abramoff, his firm and his clients raised for Grassley. Somewhere between $50,000 and $100,000 seems like a safe range.

Ultimately, the provision that Tyco was concerned about was removed from the bill — not by Grassley, but by Republicans in the House of Representatives. That's according to Kolan Davis, who was the Republican staff director of the Senate Finance Committee at the time this bill was passed. Grassley was chairman of that committee.

After the house removed the Tyco provision the first time, Grassley tried to put it back in. Then the House took it out again. Grassley, in other words, doesn't behave like a man whose mind was changed by lobbying.

But Abramoff says he didn't need to change Grassley's mind. He just needed to take the fight out of him a little bit.

But this is what I can say: What Abramoff and his emails describe is absolutely legal and absolutely routine. Every day in Washington, lobbyists who want something from lawmakers are rounding up checks for them. At every meal of every day, lawmakers who desperately need those checks to get re-elected are meeting with the lobbyists to take their money.

What Abramoff describes is not an aberration. It's not even unusual. It is simply the way the system works.