Accessibility links
Rethinking The Oreo For Chinese Consumers : Planet Money Kraft Foods thought that the Chinese would love the Oreo, but they didn't. And this started a whole process in the Chinese division of Kraft of rethinking what the essence of an Oreo really is. 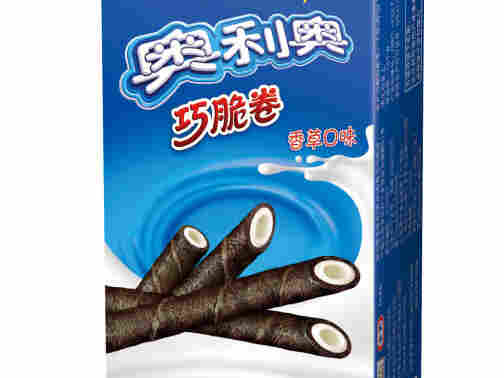 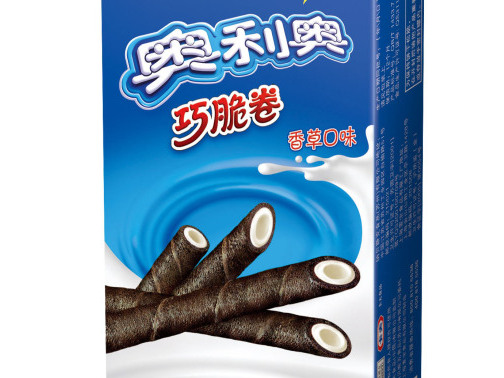 Kraft Foods has reinvented the Oreo for Chinese consumers. Its latest offering in China: straw-shaped wafers with vanilla-flavored cream filling.

Everyone knows what an Oreo cookie is supposed to be like. It's round, black and white, and intensely sweet. Has been for 100 years. But sometimes, in order to succeed in the world, even the most iconic product has to adapt.

In China, that meant totally reconsidering what gives an Oreo its Oreoness.

At first, though, Kraft Foods thought that the Chinese would love the Oreo. Who doesn't? The company launched the product there in 1996 as a clone of the American version.

Lorna Davis, who is in charge of the global biscuit division at Kraft, says the Oreo did OK. But it wasn't a hit. It was almost pulled out of China.

But before the cookie was declared a failure, Kraft thought that maybe a little research was in order. And so a decade after it was introduced, Kraft finally asked the right question of Chinese consumers. A question unthinkable in the United States:

The answer was surprising. Chinese consumers liked the contrast between the bitter cookie and the sugary cream, but, "they said it was a little bit too sweet and a little bit too bitter," Davis explained.

It turns out that if you didn't grow up with Oreos and develop an emotional attachment to the cookie, it can be a weird-tasting little thing. And this started a whole process in the Chinese division of Kraft of rethinking what the essence of an Oreo really is.

Kraft changed the recipe and made the cookie more chocolatey. The cream less cloying.

"So they said this is a better balance," Davis said.

And it started to sell. But once the Kraft team began to tinker with the classic features of an Oreo, why not go all the way?

They started to ask other provocative questions.

Why does an Oreo have to be black and white? Davis sent us an Oreo with green tea filling. Another had a bright orange center divided between mango and orange flavor.

And why should an Oreo be round? They developed Oreos shaped like straws. In China, you can buy a long rectangular Oreo wafer, the length of your index finger.

Impossible to twist apart, but Davis points out that it makes it easier to dunk in milk.

It almost became a philosophical question.

If an Oreo isn't round and black and white and crazy sweet, is it still an Oreo? What is the essence of Oreoness?

What the Chinese team at Kraft figured out is that an Oreo is an experience. You pry it apart, scrape out the filling with your teeth and plop it into a glass of milk. Their shorthand for the concept: "Twist, Lick, Dunk." All the wild new shapes and flavors of Oreo wouldn't work in China, unless they could somehow share that same experience.

"In the early days people said there's no way that Chinese would twist, lick, and dunk because that's a strangely American habit," says Davis.

But luckily for the Oreo team, the Chinese consumer was just starting to respond to emotional advertising. Oreo launched a series of TV ads where cute children demonstrate to their parents and other adults how to eat an Oreo cookie in the American style.

Davis says they saw sales of Oreos double in China, then double again, and again. Its now the best-selling cookie in China. But more important, Davis says they learned a lesson about global business.

"Any foreign company that comes to China and says, 'There's 1 1/2 billion people here, goody goody, and I only need 1 percent of that' ... [is] going to get into trouble. You have to understand how the consumer operates at a really detailed level."

Sometimes the results surprise you. That rectangular wafer Oreo is no longer just in China. You can buy it in Canada and Australia. By the time the Oreo finishes its world travels and come back home, Americans might not recognize it.