Accessibility links
Who Killed Lard? : Planet Money Lard didn't just fall out of favor. It was pushed. It was a casualty of a battle between giant business and corporate interests. 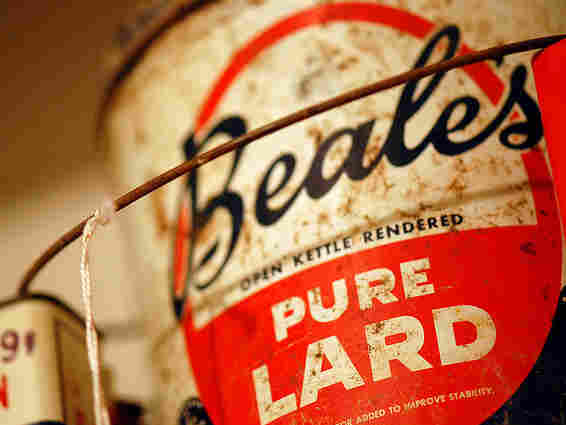 Ron Silver, the owner of Bubby's restaurant in Brooklyn, recently put a word on his menu you don't often see anymore: lard. The white, creamy, processed fat from a pig. And he didn't use the word just once.

For a one-night-only "Lard Exoneration Dinner", Silver served up lard fried potatoes. And root vegetables, baked in lard. Fried chicken, fried in lard. Roasted fennel glazed with lard sugar and sea salt. Pies, with lard inside and out. All from lard he made himself in the kitchen.

"It seems funny," Silver says, "but for thousands of years this was the thing that people cooked with.

A century ago, lard was in every American pantry and fryer. These days, lard is an insult.

"The word lard has become this generally derogatory term associated with fat and disgustingness," says Dan Pashman who hosts a food podcast called The Sporkful. "Think about Lard-ass, the character from the movie Stand By Me. I mean, he didn't want to be called Lard-ass."

How did this delicious, all-natural fat from a pig become an insult? Who killed lard?

Lard didn't just fall out of favor. It was pushed. It was a casualty of a battle between giant business and corporate interests.

A hundred years ago, lard was big money. The lard-industrial complex was based out of slaughterhouses in Chicago.

* For more on the business of food, see "Rethinking The Oreo For Chinese Consumers." *

"These people when they packed their pork, they had a lot of lard left over," says William Shurtleff, an expert on the history of oils and fats who works at the SoyInfo center. The lard sold well, he says. Nobody thought twice about buying it.

So we have our first suspect in the killing of lard: Upton Sinclair.

The Jungle was technically fiction, but it's hard to forget the section on the men who cooked the lard.

They worked in tank rooms full of steam, and in some of which there were open vats near the level of the floor.... their peculiar trouble was that they fell into the vats; and when they were fished out, there was never enough of them left to be worth exhibiting,—sometimes they would be overlooked for days, till all but the bones of them had gone out to the world as Durham's Pure Leaf Lard!

"He definitely wanted people to be grossed out by the entire meat-packing industry," Shurtleff says.

Sinclair had the motive and the opportunity to kill lard, but he couldn't do it alone. People didn't have much of a choice of cooking fats that were stable and you could keep on a shelf. Lard would survive until there was alternative for frying or baking.

For that, we have to turn our investigation to two other suspects: a candle-maker and a soap-maker named William Procter and James Gamble.

A hundred years ago, the company they founded had a problem. Procter & Gamble owned a bunch of cottonseed oil factories that produced oil for use in soap and candles. But with the invention of the light bulb, the candle business wasn't looking so hot. What to do with all that extra oil?

The company's problems were solved by a mysterious visitor. Eyes on Tomorrow, a history of the company, tells this story.

In 1907, a German chemist, E.C. Kayser, showed up at Procter & Gamble headquarters in Cincinnati with a marvelous invention. It was a ball of fat. It looked like lard. It cooked like lard. But there was no pig involved. It was hydrogenated cottonseed oil.

"You can draw a clear line between the invention of hydrogenation and Crisco," Shurtleff says.

Crisco (vegetable shortening) was designed in a lab for one purpose: to replace lard.

People were already queasy about the meat industry after Upton Sinclair's novel, but Procter & Gamble had some work to do. Unlike lard, Crisco was made in a lab by scientists, not necessarily an appetizing idea back then.

Procter & Gamble turned all that to its advantage. It launched an ad campaign that made people think about the horrible stories of adulterated lard. The ads touted how pure and wholesome Crisco was. The company packaged the product in white and claimed "the stomach welcomes Crisco."

Procter & Gamble perfected the modern art of branding with Crisco. It sent out cookbooks touting how good Crisco made you feel. It shipped samples to hospitals and schools, then bragged about how those institutions trusted Crisco. It rushed onto the newly invented radio waves, sponsoring cooking programs, that featured, what else, Crisco.

In the 1950s, scientists piled on, saying that saturated fats in lard caused heart disease. Restaurants and food manufacturers started to shun lard.

It's only been in the last 20 years that nutritionists have softened their view on saturated fats like butter and lard. They say that some of it in moderation is fine.

And those health claims by Crisco and other makers of partially hydrogenated fats turned out to be exaggerated. The products contained trans-fats that we now think contribute to the clogging of the arteries. (Crisco, by the way, no longer contains trans-fats.)

Now that science has backed off, and new food laws prevent the horrors of The Jungle, is there a chance for lard to return?

At the Lard Exoneration Dinner, Bubby's owner Ron Silver says its time to bring it back. Lard is showing up at high end restaurants, drizzled on potatoes and layered onto coal-fired pizzas. Silver says it's intimidating after 100 years of bad press to put the word back on the menu, but he's embracing it.

Just try the pie crusts, he says. Then decide.

Correction: An earlier version of this post misspelled "Procter." Thanks to the reader who pointed out the error.