Accessibility links
Why Do We Still Care About The Dow? : Planet Money The Dow is the most frequently checked and cited proxy of U.S. economic health. It's also one of the worst measures out there.

Why Do We Still Care About The Dow?

Why Do We Still Care About The Dow? 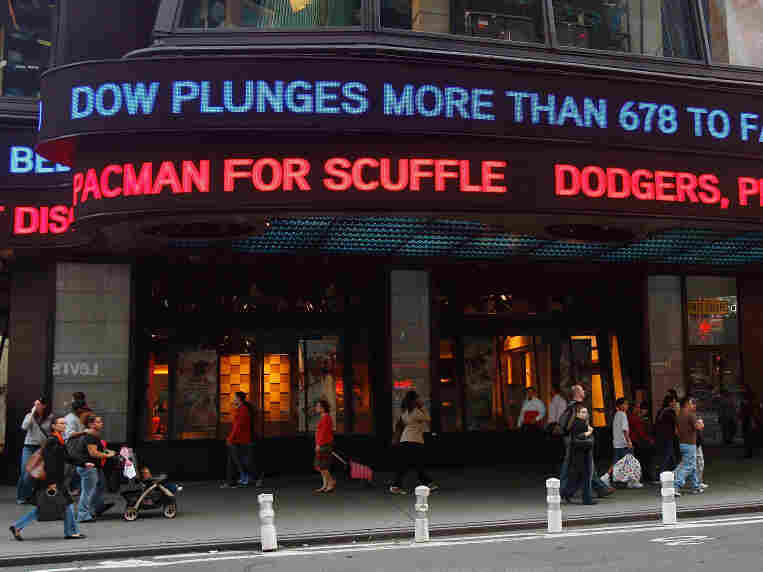 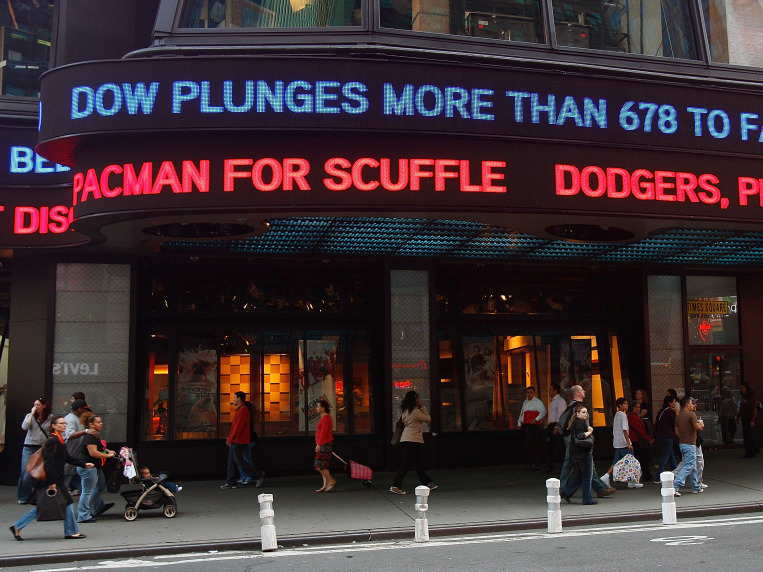 One day in October 2006, my editor gave me the same assignment that hundreds of other editors were giving their business writers. He told me to go to a trading floor to witness the magical moment when the Dow Jones Industrial Average passed 12,000 points. He may have envisioned cheers, shouts, balloons, traders cutting one another's ties and (this being 2006) dousing one another in Cristal. Instead, the traders obliviously entered orders into their computers while I stood around looking for the story.

It got me thinking: Why do we still care so much about the Dow? It remains not only a rough measure of stock performance but also the most frequently checked, and cited, proxy of U.S. economic health. It's clear why we used to care. In the postwar boom of the 1950s, the economy was growing so fast, and the benefits were so widely shared, that following 30 large American companies was a solid measure of most everyone's personal economy. Back then, the U.S. was a largely self-sufficient country, so Asian or European economic troubles didn't matter much. There was less national inequality, and everyone's income tended to move in the same direction. What was good for G.M. really was good for the country.

By the late 1990s, however, the Dow stopped being an indicator of how our economy was doing. Instead, it became the driving force. During the frothing of the tech bubble, the hottest companies weren't making money by selling profitable products and services in the real world — they were selling fantasies to stock investors. The Dow's rise (along with that of its more unpredictable younger brother, Nasdaq) hid a historic fracturing: one lucky group, enriched in part by the instant wealth of the bubble, saw its income grow faster than ever while the middle and lower classes' share of national income was declining. The fortunes of a few top companies represented opportunity for a much smaller number of Americans.

It would be extremely convenient if there were still one number or index we could check to make sense of our economy, especially during times of chaos. But the stock market might actually be our worst option. Rather than being a useful indicator, it's an anxiety-amplification device. It reflects investors' own reactions, and often hysterical overreactions, as they progress through the turmoil. It's also not without intrinsic randomness. The Dow average, drawn out to two decimal places, may seem like some perfectly scientific number, but it's far from it. A small committee selects 30 big companies — I.B.M., G.E., McDonald's, Disney and so forth — and then adds up the price of their stocks. Then the analysts divide it by the Dow Divisor, a misleadingly precise-seeming number formulated to account for things like dividends and splits that right now is, well, about 0.132129493. The resulting figure is repeated throughout the country.

And those are the least of the Dow's problems. More troubling is that it ignores the overall size of companies and pays attention to only their share prices. This causes all sorts of oddities. ExxonMobil, for example, divides its value into nearly five billion lower-cost shares, while Caterpillar has around 650 million more expensive ones. Therefore ExxonMobil, one of the largest companies in history, pulls less weight on the Dow than a company less than a fifth its size.

The Dow doesn't adjust for inflation either. Passing 12,000 points, as it did in early 2011, is incorrectly considered the equivalent to that supposedly magical moment in 2006, especially because we were in a bubble then and are coming out of a recession now. The Dow is also reluctant to add or subtract new companies. (Apple, perhaps America's model corporation, is not a member. Microsoft, by some measures its predecessor, still is.) It also, by design, ignores all sorts of things that influence daily economic life. Large-scale layoffs, which can reduce cost, often move the Dow up; environmental concerns don't factor.

Yet the Dow's biggest flaw, perhaps, is that it doesn't help us to make sense of an increasingly interconnected global economy — one in which what's good for G.M. isn't always good for the country. G.E., I.B.M and Intel, for example, all make more than half their profits in other countries. And while this may be great for their shareholders, it means little for most Americans.

Still, some argue that the stock market reflects the overall wisdom of the world's investors. That may be true when looked at over months or years, but it's never quite clear what their wisdom is telling us at any given moment. Panic in Europe might have investors terrified about the next few months, sending stock prices down. But that downward move could be obscuring the fact that those same investors feel chipper about the economy 2 or 10 years down the road. Alternately, investors might feel very badly about the long-term future of the U.S. economy but are excited because, say, that afternoon the Fed announced a low-interest-rate policy. A stock order doesn't contain a "reason" field.

None of these criticisms will come as news to finance professionals, most of whom use far more precise measures — like the S&P 500 or the Wilshire 5,000, which cover more companies more precisely — when making investing decisions. In fact, they might not even surprise Charles Dow, who created the Industrial Average in 1896. Dow observed his own index infrequently, says John Prestbo, the editor and executive director of Dow Jones Indexes, who also happens to play the role of in-house historian. Prestbo says the average investor should observe the Dow once a quarter or, at most, once a month. He also cautions against drawing broad conclusions about the overall health of the economy from any narrowly focused stock average. This is particularly true when, for the first time in a while, the economy is truly worth worrying about. And it's even more true when a twitchy financial system is being monitored by a twitchy index perfectly suited to a 24-hour news cycle. One thing is obvious: Charles Dow would have made a terrible cable-news editor.