Accessibility links
Meet Claudia, The High-Tech Cow : Planet Money At a modern dairy farm, the high-tech advances aren't in machinery. They're inside the cow. 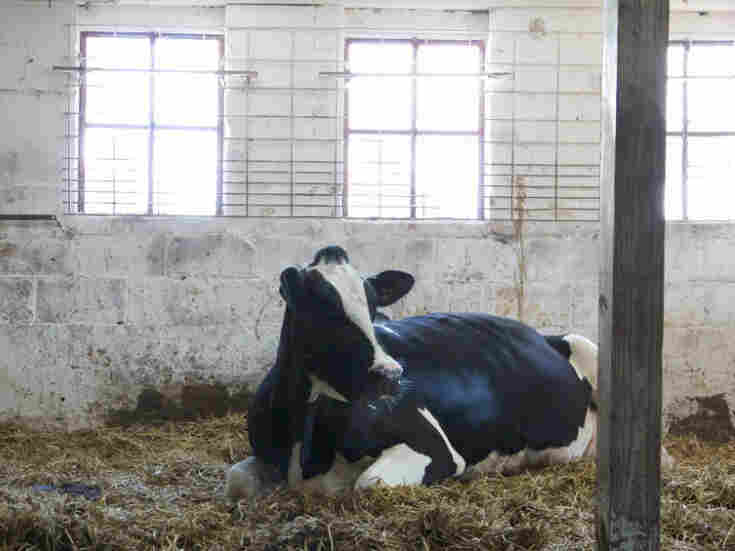 Here's the secret of the modern dairy farm: The essential high-tech advances aren't in machinery. They're inside the cow.

Take a cow like Claudia. She lives at Fulper Farms, a dairy farm in upstate New Jersey. Claudia is to a cow from the 1930s as a modern Ferrari is to a Model T.

In the 1930s, dairy farmers could get 30 pounds of milk per day from a cow. Claudia produces 75 pounds a day.

To appreciate a cow like Claudia, you have to know where to look.

"You see her udder? How well attached, how high it is?" says Robert Fulper, who runs the farm. "If you look at this cow next to her, the udder attachment is totally different."

The cow standing next to Claudia goes by a decidedly less charming name: "Cow #6."

The whole purpose of breeding is to make the next generation look less like Cow #6 and more like Claudia.

Breeding starts when a genetics expert that the Fulpers hire comes and surveys the herd and notes each cow's individual weaknesses - this one's bow-legged, that one's too skinny.

Then the expert finds a bull in the world whose traits can correct for precisely those weaknesses. The bull's semen is shipped to the Fulpers by UPS. The cow is inseminated, and nine months later it gives birth to a calf, which — hopefully — will have some of Claudia's fine, milk-friendly features.

Feeding has also gone high tech. Each cow is fed individually, according to its lactation cycle. The cows wear a special collars that work with a computerized system to deliver the right diet to the right cow.

"If she's at the stage of lactation where she's producing a lot of milk, she'll get a little extra grain there to help support her milk production," says Robert.

The feed itself is perfectly engineered to release nutrients throughout the cow's digestive tract. Think of each mouthful of grain as a little fleet of cargo planes, releasing its payload at just the right moment.

When you ask Robert what's driving all these innovations in dairy farming, he sounds indistinguishable from a factory owner.

"The free market forced that to happen," he says. "Because either you were going to make a lot of milk ... quickly and efficiently ... or you wouldn't be in business."

The Fulpers did it, which is why they are among the last remaining dairy farmers in upstate New Jersey. Those farmers who couldn't keep up with the changes are long gone.